Forget about our 'lanes.' It’s time for doctors to flood the freeways.

Jillian Horton: We spend much of our lives tending to the aftermath of failed social policies, afraid to engage. This is our call to speak out. 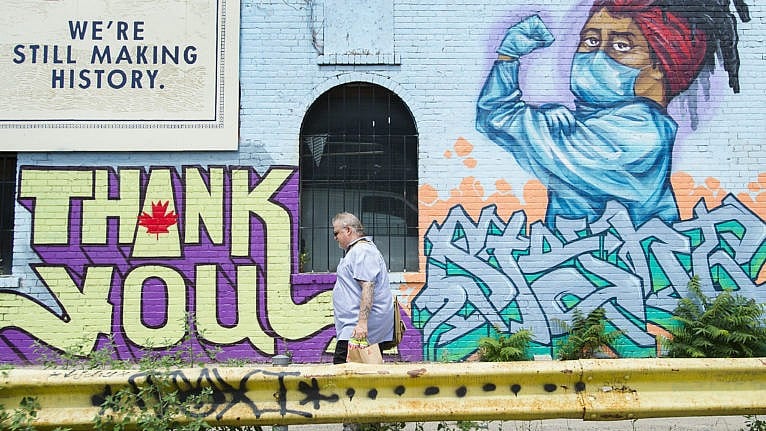 A mural pays tribute to health-care workers during the COVID-19 pandemic in Toronto on July 22, 2020 (CP/Nathan Denette)

Jillian Horton is a Canadian physician and writer.  Her forthcoming memoir, We Are All Perfectly Fine, will be published by HarperCollins Canada in February 2021.

The first time somebody told me to stay in my lane, I was 15.  I’d gotten a job writing a column about my high school for the local newspaper.  The paper’s editor talked to me like I was an actual journalist instead of a kid he’d hired to write about bake sales.  Maybe that’s why I quickly evolved to writing about things that felt like they actually mattered.

My column had been running for a few weeks when I was called in for a meeting with my school principal. He was sitting at his desk. He waved my latest piece in front of me, brandishing the headline like it was something illicit he’d found in my locker, and said angrily, “This is inappropriate.”

Now, it is an almost ridiculous understatement to say there was nothing “inappropriate” in that column.  The headline, “New Trustees Seem Receptive to Change”, was followed by a milquetoast interview with newly minted members of the school board. But perhaps because the defeated trustees were his friends, or perhaps because he preferred young women to write about bake sales, I had raised the principal’s ire.

“From now on,” he said to me, “you stick to writing about what’s happening at this school.”

I left his office shaken, afraid of the outsized impact a disgruntled principal could have on my life at 15. Then I had a lightbulb moment. I’d seek the guidance of a person who’d already treated me like I had something worthwhile to say: the editor of the local newspaper.

A few days later, an envelope arrived at my house. Inside was a copy of a letter the editor had sent to my principal, praising my writing, and noting how well it reflected on the school. Handwritten next to his signature, he’d scribbled, “Jillian: For your eyes only.”

I continued to write what I wanted.  The principal never bothered me again.

I came across that letter a few months ago when I was sorting through a box of old newspaper clippings. My decision to pursue a career in medicine meant my childhood dream of becoming a writer went on a long hiatus. But eventually, the vortex of young motherhood gave way to a more stable work and academic life, and that’s how I’m finally managing to write a stream of op-eds for major newspapers, most of them related to medicine, all of them related to COVID.

In recent months, as more politicians and pundits are telling doctors to stay in their lane, writing has taken on a sense of urgency. And it has also reminded me of an uncomfortable truth about doctors and their lanes: when it comes to public discourse, sometimes we don’t even get on the highway.

This lack of consistent activism on behalf of the patients we serve might seem counterintuitive, but sometimes the reason for our failure is practical. Years of gruelling training exhaust us, and when we emerge, many of us are both burnt out and consumed by the technical and practical aspects of our jobs. While most professional colleges say advocacy is a core competency for doctors, schools often fail to teach the actual political, communication and organizing skills that enable that advocacy. So we spend much of our lives tending to the aftermath of failed social policies, too worn down and too unskilled to change them.

Here’s another thing medical training doesn’t prepare us for: cognitive dissonance. Doctors learn in a hierarchical system, one that eventually puts our authority on a pedestal. Now, like so many other “frontline heroes”, doctors have become targets of everyone from neo-fascists to conspiracy theorists. Medical culture has tricked us into believing that equanimity gives us the right to stay above the fray, and many of my colleagues are still struggling with the idea that science can be fundamentally neutral and politically charged at the same time.

But I see an even greater barrier to action for most physicians: Fear. Activism is messy; it attracts criticism or worse. All doctors I know who write or speak in mainstream media have experienced some form of online harassment, and our profession has no existing infrastructure for offering the emotional support and proofing that would amount to better psychological armour. Health officials around the world have been the subject of credible death threats, and harassment takes a cognitive and emotional toll. Anyone who thinks those doctors simply need thicker skin might do well to reflect on what that attitude says about recent tonal shifts in our society.

Maybe that’s why my story about a long-ago time when a newspaper editor had my back feels like a parable for this moment. Journalists, long tasked with keeping power accountable, have suffered some of the worst abuse at Donald Trump’s hands. We watched what was happening but too many of us stayed in our lanes because we didn’t want to invite the same thing into our lives. The irony is that we all determine whether smear and intimidation campaigns are a deterrent based on how easily we are silenced by fear. And silence itself is inherently political, because it is often used to infer our non-objection. The fact that the New England Journal of Medicine has weighed in on a U.S. election for the first time in 208 years is extraordinary. Isn’t it more extraordinary that in the preceding 207 years, they have managed to keep silent ?

So, to my brothers and sisters in medicine: forget about staying in our lane.  This is our call to flood the freeways. We cannot stay parked in neutral. There is no more time.