Opinion: Adrienne Clarkson has reportedly received $1.1 million from taxpayers after leaving office. It may be money well spent—but the lack of transparency is a big problem 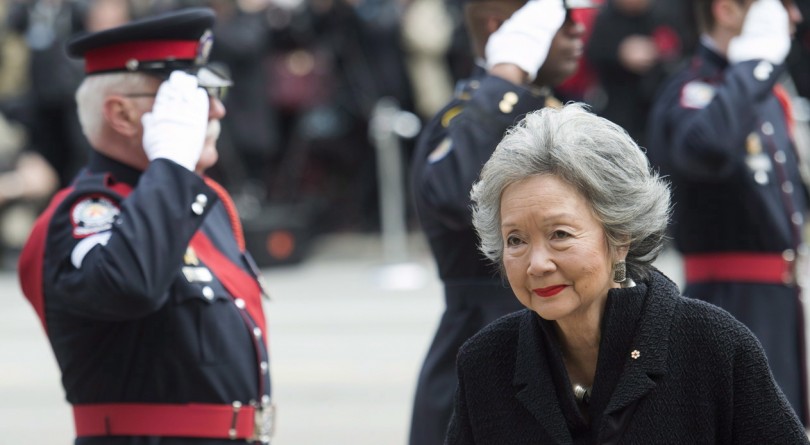 Former governor general of Canada Adrienne Clarkson arrives at the church for the state funeral for the late Jim Flaherty in Toronto on Wednesday, April 16, 2014. (Nathan Denette/CP)

This week, the National Post reported that former governor general Adrienne Clarkson has been billing the government six figures a year since leaving office well over a decade ago. The cost to date, writes reporter Brian Platt, runs to more than $1.1 million, a sum that does not include her pension and a grant to open a charitable organization. It’s all standard protocol, as the story notes; former occupants of Rideau Hall have been permitted to bill Canada for post-tenure office expenses since 1979. And they have.

That’s fine. There’s nothing wrong with the idea of Clarkson or any former governor-general receiving funds after their time as the vice regal. Indeed, the funds, if they support official or quasi-official statesmanship or public-spirited endeavours, may be money well spent. But we can’t really know if they do or not: Rideau Hall and Clarkson’s office refuse to be held immediately accountable to the public for their use of our money, and currently, there’s no way to make them. Clarkson’s office, in fact, said the matter was “private.”

On Wednesday, in response to the Post’s report, Prime Minister Trudeau announced that the government would review the program through which Clarkson and others have recouped millions over the years. He should: The program should change so that Canadians can get a look at the details of expenditures rather than see them lumped together as a budget line-item that might as well have read “Government Stuff” with a dashed-off Post-It note that says “Don’t worry about it.”

But we should worry about it. Even if we take Clarkson and her peers at their word that they’re providing value as they’re reimbursed for fulfilling these duties while also receiving a pension and a privileged post-tenure life, Canadians still deserve answers. After all, transparency and accountability are non-negotiable goods in a democracy. They help prevent and expose corruption and malfeasance. They encourage good behaviour. They provide mechanisms for redress when good behaviour goes bad, or fails to materialize in the first place. They encourage trust in and support for critical institutions that serve vital functions—the sorts of functions that set developed democracies apart from autocracies and other gangster states.

Important but unelected institutions, like the Office of the Governor General, need even more scrutiny and openness than elected bodies. If Canadians are unhappy with a government or a lawmaker, they know what to do and have a routine mechanism for doing it: an election. While the road to political accountability for elected officials doesn’t exactly go the way the crow flies, it’s more direct than the circuitous route to keeping a governor general accountable, which is through putting pressure on or punishing the government, and the issue of what to do with a current or former governor general appointed by a prime minister and government that’s moved on is even trickier. The need for clear lines of accountability became particularly salient recently as the National Post’s September report on current Governor General Julie Payette’s rocky first year in office.

READ MORE: Julie Payette takes on junk science, and tests the limits of her job title

Not only is Rideau Hall far more opaque than it ought to be, it’s a baroque and still-far-too-antiquated institution to begin with. You would think that an institution that still uses horse-drawn carriages from time-to-time would be especially sensitive to public perception and the imperatives of transparency and accountability, but that seems not to be the case. Sure, there are historical matters of protocol, and we should have nice things—but if you’re going to use gilding and carriages, you’d better be prepared to account for every nickel and dime, line by line; we citizens for whom your office and its functions exist deserve to know how their money is spent by current and former vice-regals, if only so that we can make sure we’re not getting ripped off by our gilding and carriage guys.

The institution of the governor general has typically served Canada well, and our democracy stands out among others as one of the most consistent and resilient in the world. But we’re not angels, and we’re not immune from democratic deficits and institutional breakdown and decay. Now, more than at any point in decades, we must focus on extending public transparency and accountability; today, we must double our efforts at building trust. In that endeavour, the small things matter—including the open and judicious management of the public purse.