Free speech isn't fair. So what?

Jen Gerson: The so-called Free Speech Grifters all too easily whip up outrage. The response can't possibly be to abandon the principle of free speech. 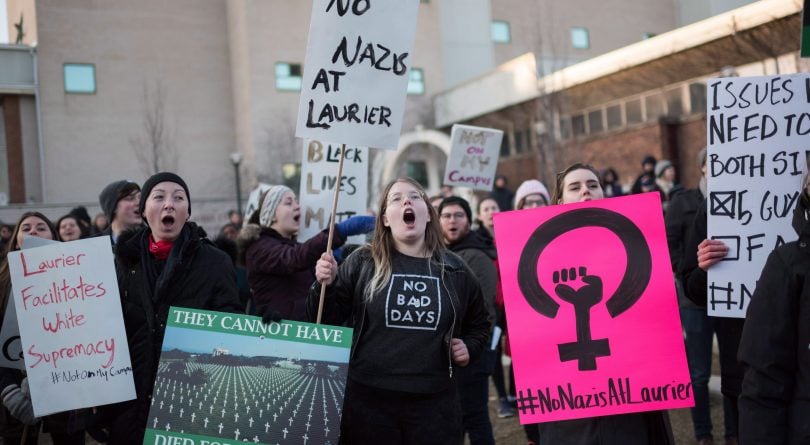 Students participate in protests against Faith Goldy, who was at Wilfrid Laurier University to speak in Waterloo on Tuesday, March 20, 2018. (THE CANADIAN PRESS/Hannah Yoon)

It’s hard not to admire the way this generation’s emerging right-wing thought leaders have leveraged campus trolling in the pursuit of fame and wealth. Set up a YouTube channel, speak some scintilla of truth—usually with a hint of anti-feminist or white supremacist sympathies—appear on campus, tweet the chaos, upload the video. Profit.

The triggers are so obvious, the outraged crowds so easy to manipulate, the response so predictable, that I wonder if attempting to come up with somewhat original thoughts and opinions on a regular basis isn’t a mug’s game.

If I could bring myself to mouth nonsense about the glorious rise of white racial consciousness while wearing a Pepe-the-frog T-shirt at a university I’d have a book deal and a Patreon account by month end. Alas, unlike the darling fap-material currently making this circuit, I am just a boring married woman with a kid.

So I must admit a degree of perverse admiration for the sheer brazenness of, say, Faith Goldy, a journalist-activist who was fired from the Rebel after showing up on a white supremacist podcast and giving sympathetic coverage to the neo-Nazi protesters at Charlottesville. She was hosted by fellow enfant terrible of the anti-PC set, Lindsay Shepherd, at Laurier University earlier this week. As per formula, Goldy’s talk was protested and eventually rebutted by fire alarm, it was all very—yawn—triggering.

Goldy increased her profile as a speaker of terrible truths about white genocide. Shepherd proved her left-leaning campus is intolerant and hostile to unpopular ideas. The anti-racism activists prevented Goldy from speaking, thus ensuring her ideas were never exposed to challenge or scrutiny. Further, they enjoyed the catharsis of silencing an existential opponent. The forces of Right-Thinking Goodness prevailed.

This is where I, pundit, make a sly buck whinging about the crisis on campus and the threat to free speech. Cue my Twitter followers with the trite and self-evident point: “Free speech doesn’t mean speech without consequences” or some variant. Well, yeah. Thanks for coming out.

The principle of free speech is about ensuring that citizens have the ability to speak their minds without fear of retaliation, incarceration or violence by the state. The question at play, here, is what “consequences” are appropriate for unpopular or offensive speech, and how those consequences are decided and enforced.

The protections of libel and slander law are available to those who are materially harmed by lies and malice, in extreme cases. Meanwhile, to be subjected to protest, or shouted down in a lecture hall seems like a reasonable consequence, to me. Pulling a fire alarm as an act of civil disobedience? Sure. Perhaps losing one’s job is also appropriate. Maybe levying strategic threats of violence against a speaker in order to create an onerous security cost is fair game. Maybe threatening the speaker with death, too? Threats are just speech, after all. And if speech is violence, then, really, throwing a rock through a window is a reasonable escalation. Or showing up at a protest with a garrotte.

The mob isn’t an agent of the state, after all. Those nutty right-wing provocateurs weren’t forced to say all those horrible, offensive and wrong things. These are just the consequences, right?

An interesting essay came out in GQ this week entitled “The Free Speech Grifters.” In it, the author describes the particular tactics of a class of right-leaning provocateurs, like Bill Maher, Christina Hoff Sommers, Ben Shapiro and Jordan Peterson.

The essay makes good points and is worth the read, but I can’t escape the framing of the thing. “Free Speech Grifters.” As if the speakers are nothing more than con artists, sneaking unacceptable speech into the public sphere through some kind of legalistic loophole known as the “Free Speech” clause. As opposed to writers and rhetorical pugilists who have found commercial success by defending unorthodox, even racist and sexist positions.

It is fair to point out that the liberal and foundational principle of “free speech” does seem to be defended most vociferously by those with an illiberal bent. This is not surprising. Those who are most likely to demand the protections of this principle are people who feel their positions are most marginal and under threat.

It’s also fair to highlight the fact that “free speech” is not a protection that is applied evenly or fairly by the masses or the media. The widespread support for Shepherd, for example, failed to materialize when Dalhousie University student Masuma Khan was investigated by her university for making a Facebook post about “white fragility.” The online mobs who lauded Shepherd’s courage then turned on columnist Vicky Mochama when she noted on CBC that “free speech” protections most often seem to apply only to “crying white girls” like Shepherd.

Mochama was correct, by the way, and yet I can’t help but respond: And so?

Those who roll their eyes at the principles of free speech in a show of solidarity with social progress rarely seem willing to explicitly state what should replace it. If a principle like free speech is unfairly applied, shouldn’t the fight be to, well, apply it more fairly? Surely, the answer can’t be to abandon the principle.

At the risk of belabouring what should be a very obvious point, it’s still an important one to make because Canada has historically attempted to control speech through speech codes, human rights tribunals and onerous legal costs and fines. This is a country whose commitment to freedom of speech—in the classical meaning of that term, as in, free from state control—is both limited and weak. What freedom of speech we do in enjoy in this country exists because deplorable figures like Ezra Levant, Mark Steyn and this very magazine challenged the human rights bureaucracies that attempted to control it, and won.

(As an aside, those who would champion a return of those kangaroo courts imagine that speech codes and human rights provisions will be administered by benevolent liberal governments under the likes of Justin Trudeau or Kathleen Wynne. Few seem to picture such power in the hands of Doug Ford.)

This is the history that underpins Jordan Peterson’s refusal to be compelled to use transgender-friendly pronouns—the position that first brought him to international fame and attention. There is a telling moment, in his now infamous 2016 TVO debate about the issue—the same one shown by Shepherd before she, too, enlisted herself as a warrior to the cause of free inquiry— in which Peterson says he would refuse to pay a fine if a human rights tribunal found him guilty of a speech offence. If they jailed him, he would go on hunger strike. He said he would literally die for the point, a show of the man’s grandiosity; and I believe that he would do it, too.

Peterson’s fate—like all those of the Free Speech Grifters—is in the public’s hands. Whether he will fold into obscurity or die playing the part of the glorious martyr is on us. If he’s a grifter, the solution is simple. As Peterson himself might put it: Sort yourself out, buckos. Stop letting yourself be so easily conned.