Pam Palmater: The rise of white nationalism happened so quickly in Canada that the government does not have a handle on the serious threat it poses to public safety 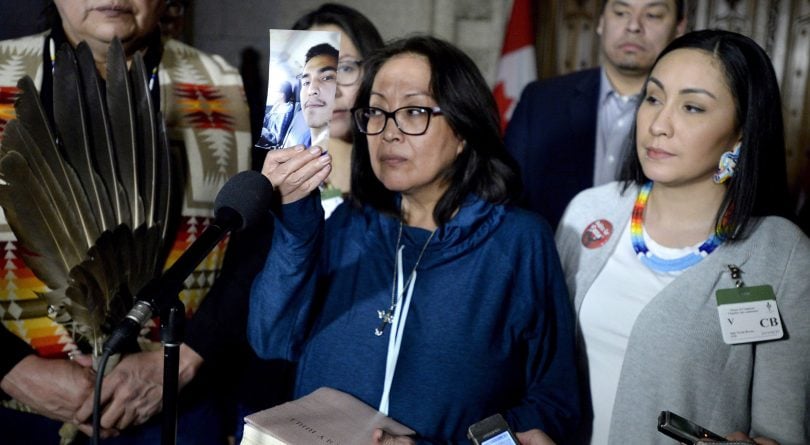 Debbie Baptiste, mother of murdered Colten Boushie, holds up a photo of her son as she speaks to reporters in the Foyer of the House of Commons after a day of meetings on Parliament Hill, in Ottawa on Feb. 13, 2018. (CP/Justin Tang)

When Justin Trudeau was first elected as Liberal Prime Minister, he promised a new Canada—one based on a commitment to feminism and Indigenous rights. He also promised to address the loopholes in the gun laws created by the former Conservative government under Stephen Harper. Bill C-71, which was intended to strengthen rules around access to firearms especially for those with a history of violence, provided some improvements but fell short of what most Canadians wanted. Canadians want to feel safe. That cannot happen if hate groups are allowed to buy hand guns and assault weapons.

The Government’s defence of Bill C-71 was framed almost entirely with verbiage like “gangs and guns” and “gender neutral,” ignoring the bulk of the statistical evidence about gun violence in Canada. Women in Canada represent a higher proportion of victims of firearms violence than their male perpetrators. It is not “gender neutral” to worry more about the interests of the primarily male gun lobby and concerns of rural men than the voices of female victims. Further, the voices of Indigenous women were excluded despite the ongoing genocide of murdered and missing Indigenous women and girls.

The rise of white nationalism has happened so quickly in Canada that governments do not have a handle on the serious threat it poses to public safety and national security. The white nationalist movement (often referred to as the populist movement), has seen far-right Conservatives take increasingly more radical positions that are often racist, sexist and anti-human rights, often aligning themselves with the gun lobby.

MORE: New Zealand is not showing Canada the way on gun control

Through his own words and actions, U.S. President Donald Trump has further exacerbated the situation by creating a space for those consumed with hatred to share and act on their views more openly. Perhaps emboldened by Trump, the friends, colleagues and affiliates of white nationalists are now being elected as political leaders, hired within universities, and in the background agitating as pro-pipeliners, anti-choice, anti-immigration, anti-Indigenous and pro-gun.

The gun lobby acts as though there is a right to bear arms in Canada, but this is not the United States. The Supreme Court of Canada held—via the historic R v. Hasselwander case—that no such right exists. In fact, the only people with constitutionally-protected rights to bear arms are First Nations whose treaties and Aboriginal rights guarantee them the right to hunt and own rifles. But no one hunts with semi-automatic military weapons. So this has never been about hunting.

While not all gun owners have links to extremists, Canada needs to keep pace with the threats before the threats overtake Canada. Firearms are often used in hate crimes against racialized and other identifiable groups. The murders of six and injury of 19 Muslims at the Islamic Cultural Centre of Quebec City, is only one example of what happens when those who hate have easy access to guns. We can never forget that it was the mass shooting of 14 women at École Polytechnique in Montreal that pushed the conversation of gun control back onto the agenda.

The one target common to all right-wing extremist groups in Canada are “Aboriginal peoples” and the killing of Leo Lachance is just one example. Leo Lachance, a Cree man from Whitefish reserve, was shot and killed by a white supremacist, Carney Nerland, in Prince Albert in 1991. Nerland was a member of the Ku Klux Klan and leader of his local Aryan Nation group who got off with a plea bargain, claiming a misfire. Allowing hate groups, who condone lethal violence, to arm themselves with handguns and military-style assaults rifles, represents a significant public safety threat.

One need only look at the shooting death of unarmed Indigenous youth, Colten Boushie or the recent shooting of another Native youth, Kristian Ayoungman as prime examples of why there needs to be stricter gun control, especially on the Prairies. Both of these shootings are reported to involve elements of anti-First Nation racism, something that has been prevalent on the Prairies for decades. It wasn’t that long ago that the Neil Stonechild Inquiry brought the practice of “starlight tours” to the forefront. This is the practice by police of detaining a Native man, driving him out of town and abandoning him there. Racism is lethal for Indigenous peoples, and easy access to guns by those who hold racist views increase the risk.

To treat gun control as sex-neutral or race-neutral further perpetuates the risk to women and Indigenous peoples. Canada should be engaging with First Nations and Indigenous women’s group to address the threat of gun violence by both white nationalist hate groups and individuals with extreme right-wing, racist views.