Bacchus Barua and Steven Globerman: A recent Ipsos survey states that Canadians are ready for technological advancement in health care, but there are significant barriers 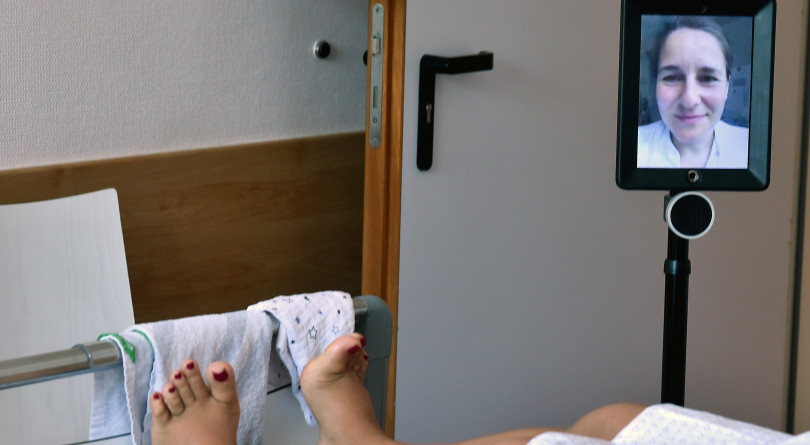 Jun. 25, 2019, Berlin: The nursing robot "Double" is located in the gynaecology clinic at the Auguste-Viktoria-Klinikum at a woman's bed. Chief physician Mandy Mangler is connected to a screen and can thus talk to the patients, even if she cannot be there personally. (Bernd Settnik/Getty)

Bacchus Barua and Steven Globerman are economists at the Fraser Institute.

The provision of medical services is on the cusp of breakthrough technologies. Companies from Apple to Amazon are making large investments in helping connect patients with doctors, while pharmaceutical companies are developing personalized cures for hitherto untreatable diseases, and disabled children are getting 3-D printed superhero-themed prosthetics.

While many may still feel queasy at the prospect of neuroscientists at Neuralink (Elon Musk’s new artificial-intelligence company) implanting a chip directly into their brains, a recent Ipsos survey revealed that a majority of Canadians are open to innovations such as virtual appointments with doctors, data portals to access their medical information, wearable health monitors and the use of artificial intelligence to diagnose ailments and assist surgery. In fact, the adoption of new technology is seen by surveyed Canadians as the most likely source of improvements to the health care system.

An important question, however, is whether—and to what extent—our government will allow Canadians to fully benefit from these innovations. While Canadians may be ready to embrace new health care technologies, there are grounds for concern that existing rules and regulations embedded in Canada’s health care system will slow, if not suppress, the introduction and adoption of innovative health care technologies.

Perhaps the most important potential deterrent is the prohibition on private payment for basic health care services.

Sections 18 to 21 of the Canadian Health Act (CHA) prohibit user fees and extra billing for “medically necessary” services, a term used to identify when the services must be funded by provincial health insurance plans. Other sections also discourage private financing and delivery of services, and this has led many provinces to be risk-averse towards allowing experimentation with new technologies.

Consider one Canadian digital app Maple. On the one hand, use of the company’s technology to provide virtual diagnoses has been welcomed by a public hospital in rural PEI. However, the same company has also been accused of violating the spirit of medicare by charging a $49 fee for video consultations to any Canadian who wants to use the service.

So long as new services are not considered medically necessary by government (and thus, not insured by the public plan), there’s sufficient grey area to allow private providers to offer some services in the form of, say, a paid subscription like Maple. But once a service is deemed “medically necessary,” incorporating new technology into the service may face significant barriers, since private providers won’t be able to charge for the treatment, and province-led health insurance plans may not have sufficient funding to meet the demand.

If access to an innovation such as online consults with a physician is readily and cheaply available from a source outside of Canada, Canadians could simply bypass the domestic health care system (and its restriction on private payment), by accessing international websites directly. It is unclear that the Canadian government would censor internet use to prevent bypass and unlikely that the government would be successful if it tried.

The simple yet controversial solution would be to modify the CHA to allow more flexibility for private payment of basic health care. Such payments are common in other countries with universal health care like Switzerland and the Netherlands, and the flexibility would enable Canadians to adopt economical health care innovations even if the government’s health care bureaucracy was slow to cover these through the government insurance plan.

Another related feature of Canada’s current health care system—the manner in which hospitals are paid—might also delay the introduction and adoption of new health care technologies. Rather than having payment “follow the patient,” hospitals are funded based on extrapolating historical trends of patient populations and service provisions, a process called “global budgeting.” Thus, if a new, but expensive technology is developed that would enable the hospital to treat more patients over the course of the year, its use would be rationed until allocated budget is increased.

By contrast, universal health care systems in Switzerland, Germany and the Netherlands are increasingly shifting towards activity-based funding, which funds hospitals according to the actual services provided. This incentivizes hospitals to treat more patients and encourages competition between providers to deliver high-quality care by adopting new and better technology, amongst other things. Under an activity-based funding model, hospitals would be more prone to employ new technology in order to treat more patients over the year and reap the funding.

A very promising focus for technological innovation which was not covered by the Ipsos survey is cutting-edge drug therapy. Personalized medicine, for example, involves tailoring medical treatments (particularly drugs) to patients’ specific genetics. But these drugs are generally more expensive than conventional therapies and may only benefit small segments of the population.

Canada regulates the maximum allowable price for new patented pharmaceuticals by referencing prices paid internationally (the reference includes countries with both relatively higher [United States, Switzerland] and lower drug prices [United Kingdom]). But earlier this month, Canada’s Patented Medicine Prices Review Board (PMPRB) made changes to how it sets prices on drugs. It was announced that the PMPRB will drop countries like the U.S. and Switzerland from the set of reference countries and replace them with other countries where drug prices are lower.

While low prices are beneficial to Canadians who can obtain such drugs, the reduction in maximum allowable prices will almost certainly result in the delayed introduction of new medicines, and relatively costly but highly effective personalized pharmaceuticals may never make it to the Canadian market.

Making matters worse, the government is also planning to use a new “cost-effectiveness analysis” to determine whether innovative drug therapies provide sufficient value to justify their cost. While it’s one thing for bureaucrats in Ottawa to decide whether or not a drug should be reimbursed by public plans, their decisions will, in fact apply to all new drugs in Canada, however they’re paid for. This is problematic, since individual patients may place higher value on their improved health than bureaucrats deem appropriate, in which case those patients might be denied legal access to beneficial drug therapies.

These concerns will be accentuated by the federal government’s recently announced national pharmacare scheme, which envisions little-to-no future scope for private insurers of pharmaceuticals. By contrast, countries such as Switzerland and the Netherlands provide universal coverage for all health care services (including pharmaceuticals) through private insurers.

In order to remove existing barriers to the introduction of innovative technologies and drug therapies, the government should allow Canadians to pay for new services directly or through private insurers, whether or not those services are classified as “medically necessary.” In fact, up to four in 10 Canadians say that they would be willing to a pay for a subscription-based virtual service if they were allowed to.

Governments could also shift from focusing primarily on cost-containment strategies such as indirectly mandating lower drug prices to a more balanced approach that allows patients (advised by their doctors) to determine the value of innovative services.

As technological change in health care accelerates, a more liberal attitude towards the pricing of and private payment for medical services might prove literally lifesaving for a growing number of Canadians.