History shows Sidney Crosby could have stood up to racial injustice

Opinion: In trying not to choose sides Crosby and the Pittsburgh Penguins have implicitly revealed what they’re prepared to tolerate 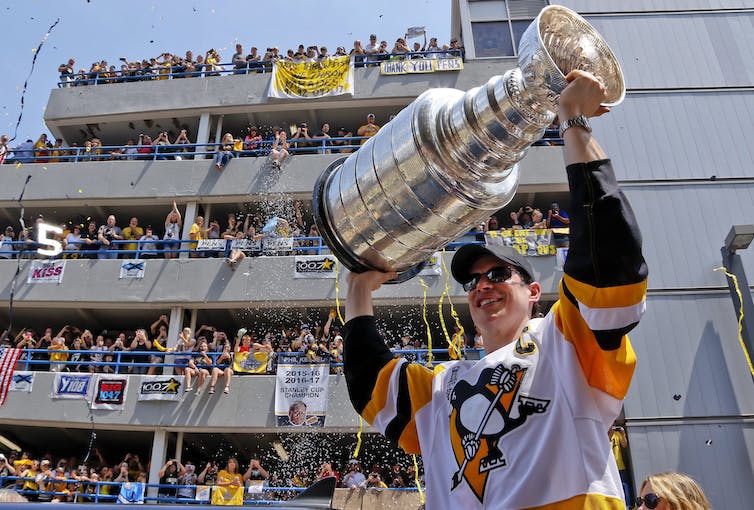 Sidney Crosby of the Pittsburgh Penguins hoists the Stanley Cup during last June’s victory parade in Pittsburgh, a city that has a long history of racial strife. Crosby and the Penguins have accepted Donald Trump’s invitation to visit the White House. (AP Photo/Gene J. Puskar)

A champion athlete, who is both white and not American, has the chance, at some personal cost, to protest racial injustice in the United States. Should he avoid taking a stand or lend support to a protest that doesn’t directly affect him?

The question is currently being asked of Sidney Crosby. His statement that it is “a great honour” for his Stanley Cup winning team, the Pittsburgh Penguins, to visit Donald Trump’s White House comes amid a boycott of the White House by the NBA champion Golden State Warriors, and Trump’s racist criticisms of NFL players’ taking a knee to protest police brutality against black Americans.

Please to inform that the Champion Pittsburgh Penguins of the NHL will be joining me at the White House for Ceremony. Great team!

Almost 50 years ago, the question was asked of another white non-American: Australian sprinter Peter Norman. The two athletes’ starkly different responses to similar situations of racial tension highlight the extent to which Crosby, the Penguins and the NHL — in the face of profound injustice — have failed to rise to the occasion.

A lasting image of protest

The photo of African-American sprinters Tommie Smith and John Carlos on the podium at the 1968 Mexico City Olympics, heads bowed, each raising a black-gloved fist in a Black Power salute, taking a stand for racial equality and human rights, remains an iconic image. 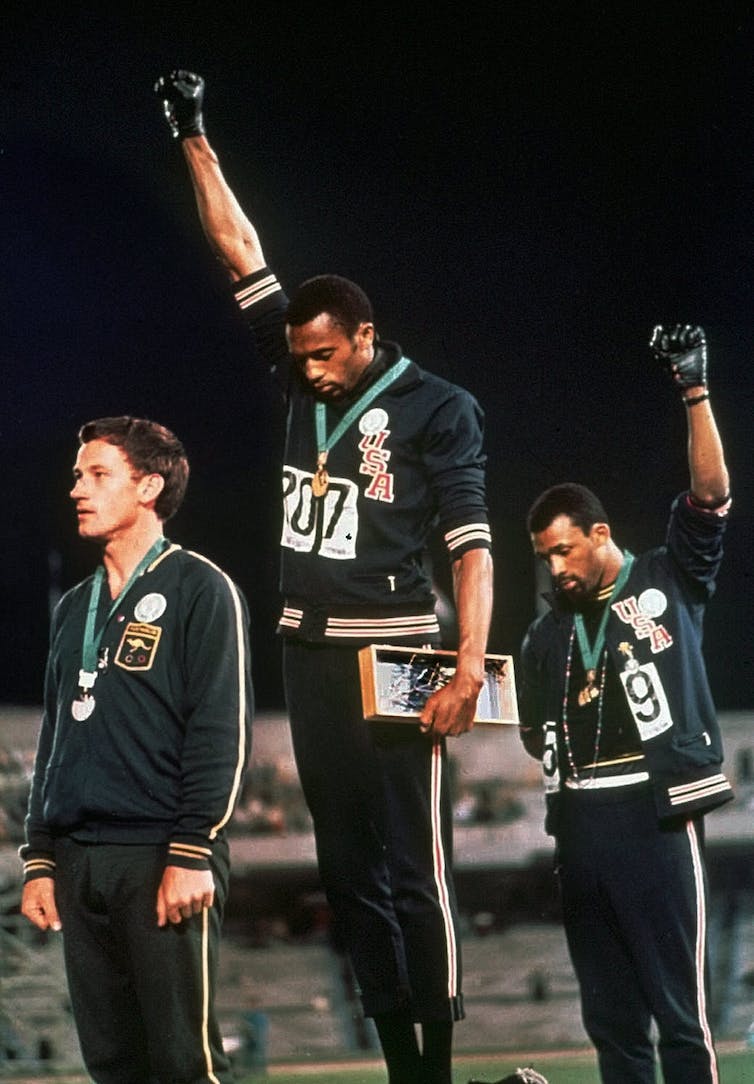 Norman, the silver medallist, is the guy standing next to them on the podium. He’s wearing an Olympic Project for Human Rights patch, borrowed from an American rower to show solidarity with Carlos and Smith. (Incidentally, Norman was also responsible for suggesting that Smith and Carlos share a single pair of gloves after Carlos forgot his, back at the Olympic Village.)

Norman, like Crosby, was in a privileged position to do something. Or he could have used his non-Americanness, or his whiteness, as an excuse to stay out of a domestic U.S. racial struggle. Instead, Norman played a crucial supporting role in what has become a legendary stand for human rights.

When Smith and Carlos told Norman what they were going to do, they asked him if he believed in human rights. Norman, driven by his strong Salvation Army faith, said he did. His ultimate response, which should be taught in schools worldwide, was the opposite of Crosby’s: “I will stand with you.”

The price of taking a stand

Norman did so despite the palpable threat of assassination in the violent summer of 1968. He faced the threat of repercussions from a controversy-averse International Olympic Committee and a home country still operating under an overtly racist White Australia immigration policy.

He did so because he believed deeply in human equality. As Carlos remarks in the excellent Norman-focused documentary, Salute: “Peter didn’t have to take that button. Peter wasn’t from the United States. Peter was not a Black man. Peter didn’t have to feel what I felt. But he was a man.” That was enough.

Norman, like Smith and Carlos, paid an enormous price for his stand. For wearing that patch, Australia blacklisted him from the 1972 Olympics despite being the fifth-fastest sprinter in the world at the time (he continues to hold the Australian 200 metre record). He was not even invited to take part in the 2000 Sydney Olympics, attending instead as the guest of an appreciative U.S. Track and Field Federation.

Long after the U.S. recognized Carlos and Smith as heroes (as their spiritual successor, former NFL quarterback Colin Kaepernick will be, in time), Norman remained a pariah: the Australian government only apologized for Australia’s treatment of him in 2012, six years after his death.

Despite the hardship, Norman did not regret his actions. For him, doing the right thing took precedence over doing the easy thing.

Crosby’s and the Penguins’ actions fall short of Norman’s example. What’s more, in trying not to choose sides — between African-Americans who fear for their lives around police and a president who finds it hard to condemn neo-Nazis — they’ve implicitly revealed what they’re prepared to tolerate. As Lt.-General David Morrison, the former Australian Chief of Army, noted in a similar context, “The standard you walk past, is the standard you accept.”

And yet, while it is profoundly disappointing that Crosby, the Penguins and the NHL have missed their Peter Norman moment, Norman himself probably would not have judged them too harshly. As he remarked in Salute: “In a victory ceremony for the Olympics, there’s three guys that stand up there. Each one’s been given about a square metre of God’s earth to stand on. And what any one of the three choose to do with his little square metre of earth at that stage is entirely up to them.”

Ultimately, what Crosby and his fellow Penguins choose to do with their square metre is a matter for their own consciences. For others, graced with the opportunity to stand with the victims of injustice, Peter Norman offers a shining example of what moral courage looks like. 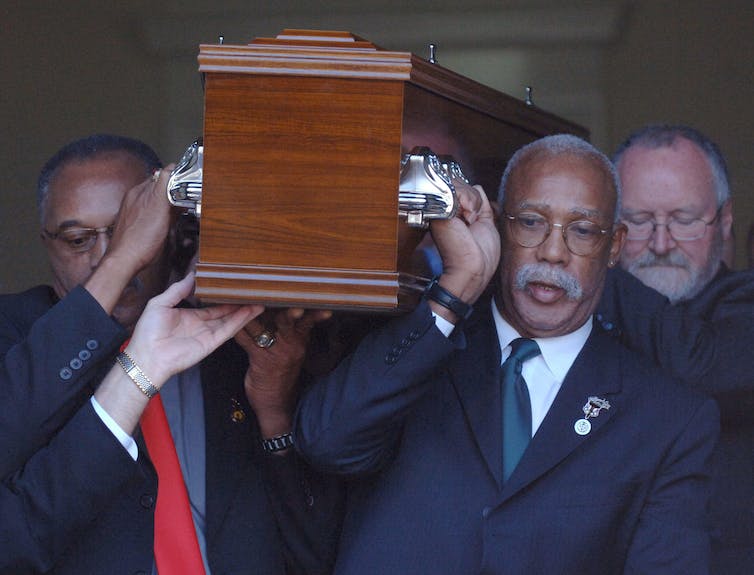 Tommie Smith, left, and John Carlos, right, who gave the historic Black Power salutes at the 1968 Olympics, reunite for the final time with the third man on the podium that year as they as they act as pallbearers for Peter Norman at his funeral in Melbourne, Australia in 2006. (AP Photo)