How Canada became an environmental outlier

Tom Mulcair: Justin Trudeau and Peter MacKay, Trudeau's likely Conservative opponent in the next federal election, represent the same generation—one that has failed on the environment 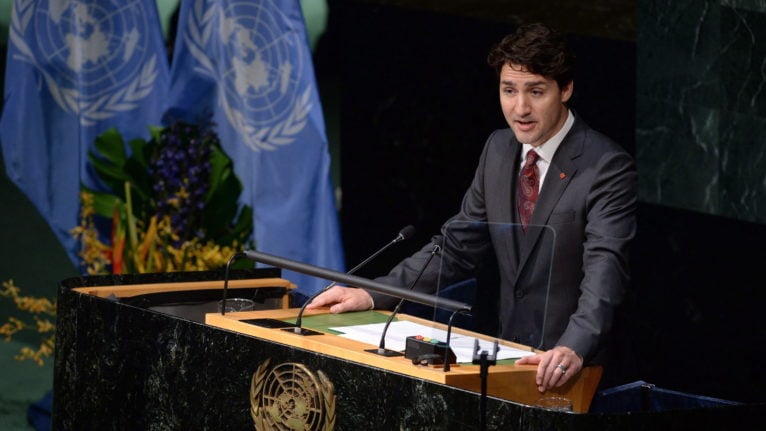 Prime Minister Justin Trudeau speaks at the signing ceremony for the Paris Agreement on climate change at the United Nations headquarters in New York on April 22, 2016. (Sean Kilpatrick/CP)

Fifty years ago, Canada became a major, credible player in the world of environmental protection with the creation of our first department of the environment by former prime minister Pierre Trudeau. That move was  accompanied by a progressive vision that was critical of the unbridled growth which showed no regard to the consequences for life on our planet.

Since then, we have witnessed what Christopher Orr, McGill researcher and bioresource engineering Ph.D. student, calls a “troubling environmental backslide” that has seen Canada go from leader to laggard.

The COVID-19 pandemic has been a human tragedy unlike anything seen in generations. At the same time, people in cities around the world are able to see mountain ranges obscured by smog for decades and to begin to rethink priorities. Many have learned that rituals like the daily commute are both wasteful and often unnecessary. This unprecedented health crisis also represents an unexpected opportunity to hit “reset” on our relationship with the natural world. It’s a chance that shouldn’t be squandered.

MORE: What happened to the old Doug Ford?

Canada is the second largest country in the world. We have stewardship of nearly one quarter of the planet’s freshwater, boreal forests and wetlands. Canada could have played a major role for the environment, but for over 50 years we’ve mostly just talked the talk, with few measurable results.

A brilliant analysis by Robert MacNeil, a Canadian climate policy researcher teaching in Australia, explains how international free trade deals and the attendant drop in standard of living of average working families in Australia and Canada have made it very difficult to adopt climate plans. In both countries, right-wing parties use identical wording—a “tax on everything”—to describe carbon pricing. Little surprise then that Canada and Australia were the first and second countries in the world to withdraw from the Kyoto Protocol.

Like Australia, Canada has become an environmental outlier, paying lip service to the needs of future generations while adopting policies that allow for an exponential increase in extractive industries and a corresponding leap in greenhouse gas (GHG) production. Like so much else in Canadian politics, discussion of the environment often boils down to pleasing your base and knocking the other side, hoping that will suffice.

Jean Chretien will always get credit for signing the Kyoto Protocol even though Canada went on to have one of the worst records in the world for GHG increases. Stephen Harper famously called the Kyoto Protocol a “socialist scheme designed to suck money from rich countries”. Chretien and Harper had results that were similar, but one approach was welcoming to environmentalists and the other, to the oil patch.

As Chretien’s former chief of staff Eddie Goldenberg later admitted, Canada didn’t have any plan to meet the Kyoto targets and it was mostly about “galvanizing public opinion”, in other words, it was largely an exercise in political communication.

Both sides were talking to their base: the Conservatives in mocking Kyoto, the Liberals in signing it. But with both Liberal and Conservative governments, Canada has consistently failed to meet its international obligations on climate change. As highly-respected former sustainable development commissioner Julie Gelfand pointed out in her final report, Canadian governments had shown a disturbing failure to meet our climate obligations for decades.

There was a lot of hope during the negotiation of the Paris Accord just after the 2015 election. I was in the conference room in Paris when Justin Trudeau, representing a new generation of world leaders, threw out his arms wide and proclaimed, “Canada is back!” What he forgot to mention was that Canada was back with Stephen Harper’s plan, Stephen Harper’s timelines and Stephen Harper’s targets—the same targets that Trudeau had derided as being woefully inadequate during the his election campaign.

Canada was once again playing to type. Canadians who cared about the environment and climate change could feel better about themselves. Even if the results still weren’t there (we haven’t met even Stephen Harper’s targets since signing the Paris Accord), at least they were no longer embarrassed. We had a new leader who could emote on the subject, even if Canada still didn’t walk that talk.

Since then, of course, Trudeau has often used variants of the same phrase—that we can have both a healthy economy and healthy air—in an attempt to justify Canada’s inaction. To an audience of Texas oilmen, Trudeau sang a different tune, affirming, “No country would find 173 billion barrels of oil in the ground and just leave them there.” Trudeau also promised to stop subsidizing the oil and gas sector then bought a pipeline.

Perhaps not surprising then that the only thing Trudeau did on the environment during the COVID-19 pandemic was weaken environmental rules to help the fossil fuel industry, just as the Canadian Association of Petroleum Producers had requested. The stakes are high and it really is a question of which generation will lead us out of the current health and economic crisis.

Trudeau and Peter MacKay, his likely Conservative opponent in the next federal election, represent the same generation—one that has failed on the environment. Anyone hoping that we could see a change should meditate on MacKay’s reflection on Canada’s role in combating climate change: “We can throw all our car keys in Halifax harbour, turn down the heat, turn off the lights, walk around naked in the dark eating organic beets and it won’t make a difference.”

No one knows how long the pandemic will last. We know even less about its economic and social aftermath. There has, on the environmental side, been a monumental drop in GHG production and nature has been enjoying the break. People may well be more open to a fundamental change in priorities concerning production, consumption and growth.

The last word to McGill Ph.D. student Christopher Orr, who does represent the next generation. “The global ecological crisis, characterized by climate change, sea level rise, ocean acidification, a sixth mass extinction, promises an even more deeply unsettled time than previous periods,” he wrote in his thesis. “These changes threaten to destabilize global and local systems through mass displacement and migration, conflict and war, and disruption of agriculture, food and water provisioning, energy systems, transportation, and supply chains. The current situation presents a unique opportunity to deal with underlying tensions and trade-offs between the economy and the environment, and to bring about a better world.”