How censorship became deadly during the First World War

Opinion: If censorship of the media and controversial ideas hadn't prevented Canadians from understanding the Great War, history could have gone differently 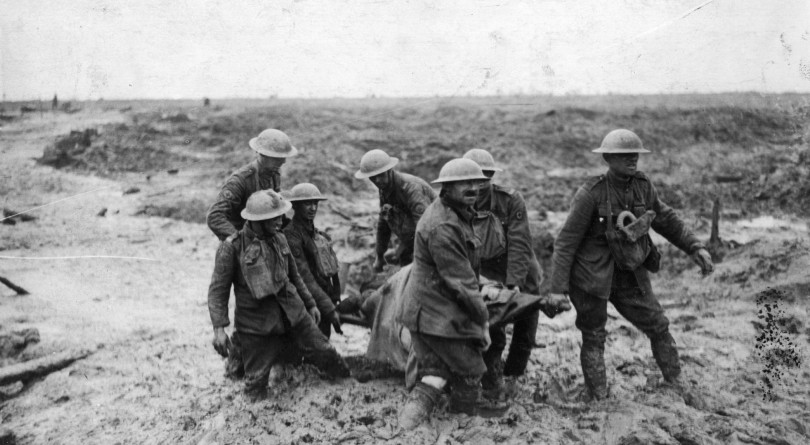 A stretcher-bearing party carrying a wounded soldier through the mud near Boesinghe during the battle of Passchendaele in Flanders. (John Warwick Brooke/Getty Images)

Mark Bourrie is the author of The Fog of War: Censorship of Canada’s Media in the Second World War (Douglas & McIntyre, 2012), which was an adaptation of his PhD thesis. His latest book is The Killing Game: Martyrdom, Murder and the Lure of ISIS (HarperCollins, 2016). He practices law in Ottawa.

The Boer War wasn’t just a disaster for the British army in terms of geopolitics and the perception of its power on the world stage. It was also a disaster in terms of public relations.

Much of the European and American press had supported the Boers, casting these Dutch settlers as victims of brutal British colonialism (though very little ink was devoted to the dispossessed indigenous Africans who were colonized by the Boers and the British). Meanwhile, foreign press printed stories about the new British invention, the “concentration camp” where Boer civilians were herded, and of the boldness of the guerrilla campaigns waged by these farmers against the professional army of one of the world’s greatest powers.

So the British learned their lesson for their next war—the First World War, almost 12 years later—investing significant money and effort into developing a scientific censorship and propaganda system to manipulate world public opinion. The best minds in the British press and universities were co-opted to develop censorship and propaganda systems, and they learned that it only worked if the marketplace of ideas was cleansed of competing narratives.

During the First World War, the British enlisted a small army of people to check the newspapers, open mail, intercept telegrams, read newspapers and snoop on private conversations, in an effort to find anything “defeatist.” It was effective; by the end of the war, Erich Ludendorff, the Kaiser’s senior general, wrote that it was Britain’s key to victory, as did Adolf Hitler in the next world war, years later. The Brits’ style of censorship quickly found its way to Canada: In 1905, the Canadian government agreed with the British that news out of Halifax and Esquimalt would be censored if a major war broke out. Then, initial rules that were given teeth by the War Measures Act were seen as reasonable precautions against feeding German spies information about troop movements, like reports on ship departures from Halifax.

But the scope of these extreme measures spiralled quickly. Within weeks, any other news that was “useful to the enemy” or “not in accordance with the facts” was banned. The screws only tightened throughout the war. By 1914, Canada had allowed the British to censor all the newspapers in Canada, at first by British military intelligence and, later, by a national censor, a former MI5 agent named Ernest Chambers. By 1917, films and plays fell under censorship. Then censors began pawing through the shelves of record shops, and eventually banned 39 recordings. In the end, censorship wasn’t just a set of ideas that happened to stifle civil liberties—it also cost people their lives.

By the third year of the war, the Allies were losing in Europe. Russia had been effectively knocked out by the summer, and all the “big pushes” in Flanders had been useless bloodbaths. Canada was in a sorry state, too: the year before, the Parliament building had burned down, and the country was starting to tear itself apart on the question of whether young men should be drafted to fight overseas.

But you wouldn’t have known it from the media’s wartime coverage, which constituted British military propaganda that bore little relationship to the situation at the front. Journalists were banned by law from even mulling a non-military solution to a war that should have reached a negotiated end within its first year or two. The censors banned 253 publications, almost all of them journals that came from the United States, where war criticism was legal until late 1917. Just a few weeks before the end of the war, censors shut down every newspaper printed in the languages of any of the enemy powers. Since the Austrian empire contained so many minorities, the ban included almost all the Slavic languages of Eastern Europe, along with German.

Censors also banned several Canadian newspapers—Victoria Week, Sault Ste. Marie Express, Montreal’s Le Bulletin, and Quebec City’s Le Croix—and they came very close to banning Le Devoir. Sault Ste. Marie’s paper was punished for committing the great cardinal sin of the war: it had questioned the very idea of the war itself and the wisdom of sending any more soldiers overseas. At the same time, following the lead of the British public and its journalists, Canadian editors were ordered by the government not to print anything that might cause “irritation” in the United States and hamper the sophisticated and successful propaganda war waged by the British out of New York City.

Spies and informers went among the public to make sure that they, too, didn’t break the law by discussing the causes of the war or asking out loud whether it was time to negotiate a peace. Feelers from Germany and Austria on the matter of peace went unreported. The Canadian public had no idea that the enemy powers were willing to come to the table. It became illegal to even talk about the “defeatist” idea of a negotiated peace.

Over the course of the First World War, censorship had evolved from a system that was supposed to prevent the leakage of military secrets to a mechanism to enforce political conformity. People should have been able to talk about the flimsy reasons behind Canada and Britain’s decision to enter the war, and to challenge the excuses made for its continuation. Had all sides been able to have some sort of free debate, Canadians may have realized by 1915—when the Western Front was locked in a murderous stalemate and the allies in the East were reeling—that this war was a grotesque mistake.

READ MORE: How Canada earned the world’s respect in the First World War

If there had been a negotiated peace early in the war, the pre-war status quo might have been restored. At the worst, militarists would have had a stronger hand and Germany’s evolution into a constitutional monarchy would have been set back a few decades. The Germans might have demanded reparations, but France had survived a similar punishment when they lost to Germany in 1871. Kaiser Wilhelm II could have picked up some colonies, but the Age of Imperialism was already in its twilight.

Instead, millions died at least in part because facts and the ability to rationally and reasonably debate the options were suppressed. That affected survivors, too: when the fighting men came home from the war, they had trouble connecting with the people who had stayed home and consumed four years of propaganda. Since so few people really understood what they went through, many veterans stayed silent—“grandpa never talked about the war”—and self-medicated with alcohol and drugs.

Harjit Sajjan: To our soldiers and veterans, please know your sacrifices are not in vain

The press censors of the Second World War realized the folly of the First. Wilfrid Eggleston, the chief English press censor and later, the founder of Carleton University’s journalism school, believed bad news stimulated people to fight. Canada had been protected from the grim reality of the First World War, and France’s brutal censorship before June of 1940 had allowed the French people to ignore the Nazi danger until it was too late.

So in the Second World War, Canadians had a much better idea of what was happening in the war, and had more opportunity to talk about it. Eggleston and his colleagues never had to deal with much revulsion to the war except in Quebec, largely because Hitler was a much different animal from the Kaiser, a fact that was obvious from the outset of the war.

With the ability to share ideas in the free marketplace of ideas, things might have been different. If people knew what was going on at the Western Front, understood the terrible cost in lives and national treasure, and fought for that awful war to end soon after a stalemate made it obvious that no war aim was worth the price, we might have celebrated this centennial three years earlier. And we might not be looking ahead to the commemoration of the centennial of the Second World War in just 21 years’ time.