How China weaponized its supply chain

When the coronavirus emergency transitions to a post-COVID-19 economic order, securing the critical needs of Canadians, and the supply chains that meet them will be an essential and historic undertaking 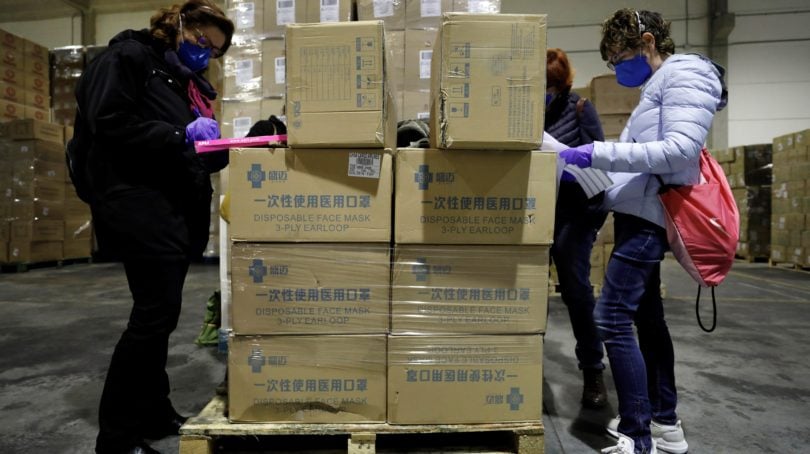 Workers sort out all the personal protective equipment (PPE) received from China at a warehouse in Valencia, Spain, on Mar. 25 2020. A total of 3,800,000 masks, 5,000 protective suits and 2,000,000 gloves arrived to Valencia region to equip hospitals and elderly homes. (Juan Carlos Cardenas/EPA/CP)

In homes and hospitals across the country, Canadians are now directly encountering the existential threat that authoritarian forces pose to their lives. As leaders navigate public health and economic crises caused by COVID-19, our foreign policy establishment has opportunity to dispense with ideological fantasies of post-nationalism, and embrace the reality that nations are comprised of citizens, borders and interests.

Instead of pursuing genuine cooperation when confronted by the virus, authoritarian regimes in Beijing, Tehran and Moscow facilitated its transmission by concealing their failures, proliferating disinformation about its source, and expending immense resources exploiting this crisis for their exclusive economic advantage. They are weaponizing medicine to advance their standing in the world order.

The implications of this subversion of Canadian interests are immense, and place two crucial objectives before our leaders. First, Canada must ensure that our vital supply chains are not at the mercy of non-democratic adversaries; and second, we must deepen resilience and cooperation among other democracies.

At the very intersection of the present debate between globalization and nationalism, featuring economic dislocation and global disruption, are questions around the critical supply chains that cross sovereign borders. For decades, dictatorships in China, Russia and Iran have manipulated uncritical assessments of their true nature, gaining leverage over nations made vulnerable by the seduction of economic supply. Across the free world, Holland, Spain, Italy, Australia and others now contend with the threat of junk supplies masquerading as “aid” from China, while public health systems are strained or overrun. Canadians are contending with precisely these same challenges.

This pandemic is forcing our leaders to prioritize the medical security of Canadians, competing for supplies with even our closest ally, the United States. When the immediate emergency transitions to a post-COVID-19 economic order, understanding and securing the critical needs of Canadians, and the supply chains that meet them will be an essential and historic undertaking.

The coronavirus has highlighted the vulnerability that global value chains (GVCs) present when non-democracies exploit the rule-of-law cooperation that underpins them. China, for example, has steadily climbed the medical device GVC as a result of their Made-in-China 2025 policy. One of China’s goals is to transition from being on the low-value-added end to the high-value-added end of the GVC in 10 manufacturing sectors, including medical devices.

As a result, when faced with such an immediate crisis, Canada’s own supply chain was disrupted by China’s shutdown, with grave consequences today for our frontline health care workers. Damningly, while President Xi Jinping tried to suppress the pandemic brewing in Wuhan, his senior advisors conspired to weaponize China’s medical supply chain by draining high-quality medical supplies from Western sources, flooding desperate ones with bad equipment, and controlling a global position in pharmaceutical manufacturing. This represents a whole new unimaginable concept for Canadian foreign policy to contend with: weaponized medicine.

Dependence on China’s supply chains extend beyond medical supply to several products integral to our survival. With “China and India providing an estimated 80 per cent of raw ingredients of the world’s drugs,” a full review is needed around the complex risks China’s state-run economy poses, alongside mitigation measures to reorder these vital economic supply chains. There will be opportunities for economic self-reliance, in how much Canadians can produce and manufacture alone. There will also remain the need for secure supply chains, and those will need to preference the world’s democracies.

Tools are indeed available to protect the Canadian market economy against those that seek to upend it, including the Investment Canada Act. Matters of critical infrastructure, both physical and digital, are manifest in the national debate over Huawei’s role in Canada’s 5G network because of that Act, and establish important hurdles enshrined in law to secure the interests of Canadians. The same needs to be applied when it comes to the security of our drugs and medical supplies.

MORE: Criticism of the Chinese government’s handling of coronavirus is not racism

As long as the critical needs of Canadians are dependent on authoritarians, we remain at the mercy of such regimes’ incompetence or, worse, malevolence. Difficult days are ahead as we seek to understand the new economic realities of the post-COVID-19 world. Canadian national interests demand economic independence from authoritarians.

Authoritarians have become masters at subverting the postwar democratic order, while democracies have confused pluralism with moral relativism and equivocation. Canada should now take the lead in promoting a democratic national interest that boldly strengthens the bonds between new and established democracies, and that builds resilience in vulnerable democracies.

The Chinese government’s failures were aided by uncritical foils in Western media and apologists in international organizations. Chinese officials continue to aggressively promote false narratives about its origins, ridiculously propagating the myth that COVID-19 is an American biological weapon. Iran’s regime, too, played a role in the growth of the epidemic in Canada. After Supreme Leader Ali Khamenei directed the Iranian regime to cover up the outbreak for domestic political reasons and refused to quarantine the population, COVID-19-positive Iranians began to arrive in Canada in late February. And earlier this month, the European Union warned that Russian disinformation about COVID-19 was putting lives at risk, while accusing Vladimir Putin’s regime of “playing with people’s lives.” In addition to suppressing information about the virus’s spread in Russia, state media platform Sputnik also promoted false narratives about the origins of coronavirus, speciously suggesting that it originated in Latvia, where Canada is leading NATO’s Enhanced Forward Presence.

These regimes reject responsibility for their role in the global spread of the virus, unencumbered by domestic accountability and obsessed with repression and lifetime rule. Rather, they have resorted to igniting obvious disinformation and misinformation about the pandemic, contributing to what can only be called an “infodemic.” And now they seek to capitalize on the global chaos they have principally engendered.

China has been particularly brazen, using this opportunity to deepen its control and material influence across UN agencies, including the World Health Organization, the International Civil Aviation Organization, and INTERPOL. The Iranian regime, too, is taking advantage of this international emergency. Despite refusing medical help from Doctors Without Borders and the United States, it continues to pressure the international community for sanctions relief in the form of cash. If the past is any indication, it could use that relief to fund terrorist adventures abroad. Russia is exploiting the pandemic and energy price war to further erode EU and NATO cohesion on sanctions levied against Putin regime officials and kleptocrats. Russia’s recent “aid” delivery to Italy—of which 80 per cent was discovered to be “useless” according to a recent report—was clearly part of what the EU’s foreign policy chief Josep Borrell identified as a “struggle for influence through spinning and the politics of generosity.”

For all their machinations, these authoritarian regimes have a clear mission: disrupt democracies and disrupt their cooperation. It is noteworthy that some of the democracies whose security is most imperilled by neighbouring authoritarianism (Israel, South Korea, and Taiwan) have been especially adept at delivering for their citizens unsentimental safety alongside successful democracy.

Fortunately, established democracies have significant institutional resilience in the face of crises, balancing tensions between security and liberty. Even in Canada, this precarious balance demands vigilance. Where Prime Minister Justin Trudeau failed, Hungary’s Viktor Orban succeeded, both pursuing a naked power grab in the midst of this crisis.

This is of course not to say that democracies have acted perfectly in the face of the coronavirus pandemic. One need only look at Italy or the United States to realize that is not the case. However, our democratic allies have, in large part, been transparent about their challenges and have cooperated with Canada to limit the impact. Conversely, our adversaries have been anything but helpful.

The lesson we should draw from this experience is that deepening democratic resilience, and forging stronger bonds with democratic allies, ought to become central goals of our foreign policy.

This cannot be accomplished by diminishing Canadian democratic convictions in pursuit of a seat at the UN Security Council (UNSC), a project which has occupied an outsized obsession of the foreign policy establishment. Simply put, there can be no consequential Canadian leadership in such a role, especially in the aftermath of China’s farcical UNSC presidency. For all the investment, expertise and diplomacy that has captivated Canadian leadership around this project, it has distracted the country from guarding against the threat of emboldened authoritarians, and undermined our ability to advance the national interests of Canadians.

As we rebuild, Canadians will rightly insist that a democratic and economic logic inform our interests in a world order where medicine is now weaponized. They would rightly insist that the supply chain decisions on essential matters provide for an independent Canada. And they would be right to insist that our leaders show resolve in standing with democratic allies against the world’s principal despots whose interests are so clearly in opposition to our own.