As Donald Trump assails Canada's supply-managed dairy industry, history shows how perceptions around Canadian milk changed—turning it into something worth defending 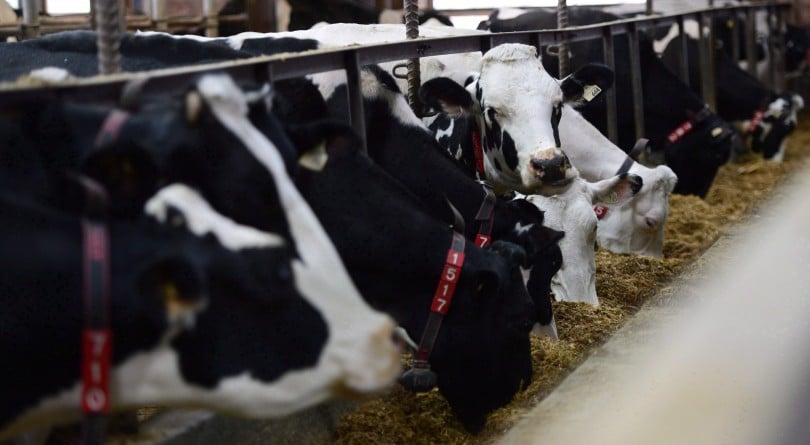 Dairy cows feed in a barn on a farm in Eastern Ontario on Wednesday, April 19, 2017. (Sean Kilpatrick/CP)

“In Canada, some very unfair things have happened to our dairy farmers,” U.S. President Donald Trump said in April. He went on to say that these “things” are responsible for putting farmers in Wisconsin and New York out of business, calling the trade situation a “disgrace.”

Canadians may have been mentally prepared for an assault on the auto industry, and tariffs on steel weren’t a huge shock. But as NAFTA continues to fray, the fact that dairy has become a hot-button deal-breaker of an issue might come as something of a surprise. It has also provoked Canadian pundits and at least one dairy processor to call for an end to the dairy industry’s supply-management system.

Many industry experts and food scholars, however, argue that Canada’s dairy supply-management system is responsible for some of the cheapest milk in the world as well as keeping farmers in business—all while costing taxpayers nothing. The quota system, which gives farmers the right to produce a set amount of milk and sell it at fixed prices and, simultaneously stabilizes prices and production standards, just might be one of the smartest policies to have been born out of post-war governance in Canada. And funnily enough, the backstory of how it came to be can be connected to another cross-border trade war, back in the early 1930s—after which, Canadians started to seriously think in terms of milk as a valuable public resource.

It all started with Smoot-Hawley, a U.S. 1930 tariff act that dealt a veritable death blow to the North American economy and certain Canadian industries in particular, since it hiked tariffs to nearly 300 per cent on some products. The dairy industry was hit hard, as the market shrank and prices plummeted. This, according to Peter Slade, an agricultural scientist and professor at the University of Saskatchewan, is when the Toronto Milk Producers Association started to play around with quotas—which saw distributors and members of the association reach an agreement that set production levels, to ensure both parties were protected from the problems caused by surpluses and shortages. At the time, the idea seemed to have legs, given that quotas were adopted across Ontario—even if it did take over 30 years for the entire industry to come around to it.

Canada has a history of discouraging quotas in many industries, since it’s thought of as price-fixing; it also gives the impression that it’s a closed-off, exclusive club to which farmers need to buy privileged access. However, although the initial outlay is more expensive for a Canadian trying to get into the dairy business, it’s actually easier for a new dairy farmer in Canada to draw up a viable and realistic business plan since the price of milk is essentially guaranteed, eliminating the fear of bankruptcy in the face of a surplus-prompted nosedive in prices.

Meanwhile, milk was under assault. There were crooked dairies that sold adulterated, watered-down milk to the poor, and there was a fear that unpasteurized milk was responsible for the deaths of hundreds of children every year by spreading diseases like tuberculosis and typhoid. Raw milk was, indeed, a vector of disease prior to mandatory pasteurization, which was a particularly vexing problem, given that health professionals thought milk was an important source of protein, especially for malnourished kids; children were prescribed a quart per day, more if they were ill. As University of Manitoba historian Julie Guard notes, the Health League of Canada even called milk an important pillar of health in the 1930s.

But reforms that would ensure clean milk were slow and hard to push through, often resisted by farmers’ advocates and the dairy processors. In 1936, when regulations mandated cattle be tested for tuberculosis, one representative for the farmers said faulty tests were resulting in too many cows being culled and, as a result, he predicted the price of milk would double the following year.

Which it did. The price of milk shot up in 1937, putting further strain on already distressed working and middle-class families. In response, some activist women in Toronto, frustrated by the lack of government intervention in the seventh year of the Great Depression, formed an association to make their voices heard. These “militant housewives,” as they were dubbed in one Toronto Star headline, threatened “butter boycotts” and protested at the Board of Control.

Women were not usually welcomed into the political sphere, and those times were no different. One of the leaders of the Toronto Housewives League, 23-year-old Bertha Lamb, even received a letter threatening her child. She brushed it off, saying she’d be putting her baby out on the front lawn the next day, as usual—“that is, of course, if it doesn’t rain.”

But for the large part, though, the public was sympathetic to the women. In a journal article, “A Mighty Power Against the Cost of Living,” Guard argued their actions seemed justifiable since milk was viewed as that pillar of both health and morality, akin to a public health resource. Today, gallons of ink have been spilled either debunking or defending the health claims around milk, but at this point it was seen as entirely wholesome—at least when it wasn’t contaminated—and essential to the health of the family.

Even dairy farmers sympathized, with one saying that the citizens of Toronto had “a good right to holler at the price of milk.” Many farmers blamed the processors for the price hike contended that milk should be treated and distributed as a public utility. Perhaps the first sign that attitudes over milk were changing came from Premier Mitchell Hepburn’s Ontario Health Act that, in 1938, made pasteurization mandatory. That, however, was a minor change compared with the kind of legislation progressive and conservative governments started considering in postwar Canada, as post-war thinking about the social contract underwent a profound change.

“When Canadian soldiers came home after the Second World War, they basically said, ‘We were out there protecting your rights and liberties and we don’t want to have the same kind of system that we had before which led to 10 years of depression and five years of war,’ ” said Bruce Muirhead, a University of Waterloo historian specializing in agriculture. “It might not have been consciously articulated like that, but the voters elected officials based on that premise, and the government responded.”

Then, after the war, various commissions were assembled to offer solutions to the problem of fluctuations in the price of milk, which had been exacerbated by a post-war reduction in demand for food exports. The first systems utilized a few different measures, including import controls, floor prices and subsidies, but the idea of fully subsidizing agriculture was a non-starter at that point. Under John Diefenbaker, then-finance minister Donald Fleming dismissed it as a total budget-buster, since it was estimated to cost $60 million a year for dairy alone. But the solution would be implemented by the next administration, under Lester B. Pearson, which also set up another commission that recommended a strict set of national guidelines for the production, sale and marketing of dairy—ones that included supply-management quotas.

Muirhead says that system was essentially put in place in 1965 and that, since then, it’s worked well to keep small dairy farmers afloat, which helps rural economies. What’s more, unlike some quota systems that are thought to harm the consumer, it keeps the price of milk quite low. Despite what you hear on the news, Canadian milk isn’t actually more expensive than it is in most other countries, including the United States, where it’s subsidized.

“When you look at the official numbers of the price of commodities from the U.S. Bureau of Labor, you’ll see that in every region of the U.S. except the midwest, four litres of Canadian milk is actually cheaper than American,” Muirhead says. “When Canadians buy discount milk at the Bellingham (Wash.) Costco or the Buffalo Walmart, it’s in a sense oppressing American farmers, because the supermarkets set the price to attract Canadian shoppers and don’t care what the farmer needs to break even.”

So it turns out Trump is half-right: Unfair things are happening to farmers, and some cross-border shopping Canadians do benefit from it.

If we did away with supply management, however, Muirhead predicts that Canadian dairy farmers would face similar problems in a very short time, pointing to the example of a recently deregulated dairy industry in Australia, which he says is disastrous. We might well return to the race-to-the bottom vicious-circle cycle that sees farmers over-producing to make up for low prices, which only further lowers the price. Or maybe we’d just go back to the good old days of fluctuations, farmer bankruptcies and housewives being threatened over their butter strikes.

Milk is no longer seen as a pillar of health and morality. Many, in fact, question if it’s as good for us as we’ve been told. But, between a new trade war looming, rural stagnation and worries over food security increasing, it’s time for fresh thinking about food as a public resource, as opposed to a consumer good, like they started to in the 20th century.