How did VW avoid criminal charges in Canada over its emissions cheating?

Stephen Maher: Environmentalists want to know why Canada dragged its feet for years, and why the PMO met with the company 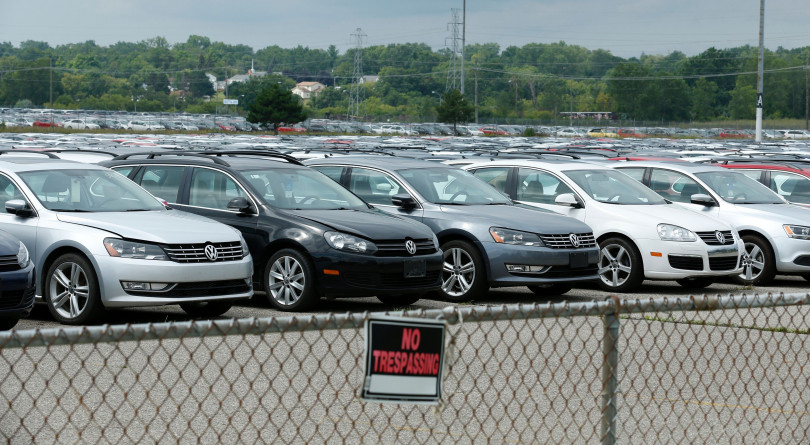 In the United States, VW pleaded guilty to three felonies, including conspiracy and obstruction of justice, over its emissions cheating (Jeff Kowalsky/AFP/Getty Images)

When Volkswagen Canada pleads guilty on Wednesday to illegally importing cars that were rigged to beat emissions tests, investigators and prosecutors may be tempted to celebrate. This is expected to be the biggest environmental fine in Canadian history. Volkswagen is facing 60 charges and each charge carries a maximum penalty of $6 million, so the automaker may be forking over $360 million.

But before anyone pops any bubbly, there are a series of unpleasant questions that should be answered, ideally by officials testifying in parliamentary hearings, because otherwise we will likely never learn why Canadians are so much worse than the Americans at investigating and prosecuting this kind of terrible crime.

To protect the integrity of the process, investigators and prosecutors necessarily do their work in secret. Because Volkswagen is pleading guilty, there will not be a trial, where the public could learn information about the investigation. It would be good to know, for instance, why this process has taken so long.

In 2014, when investigators at the West Virginia University tested the emissions of VW’s popular four-cylinder diesel Jetta, they discovered that it was emitting something like 40 times the allowable amount of toxic nitrogen oxide, a carcinogen that is responsible for thousands of preventable deaths a year, particularly affecting those with respiratory illnesses like asthma.

When they got the results, the Environmental Protection Agency soon discovered that VW had rigged the software on its cars so that when they were being tested, the emission control system would function properly. Out on the open road, though, the system would allow the cars to spew poison into the air.

When the EPA discovered this, it brought the hammer down. VW executives gave various false explanations for the discrepancies, trying to hide their crimes, but the EPA charged engineers involved in the scheme, threatening them with long prison sentences. The EPA also threatened to yank VW’s import licence. Eventually, the company abandoned the coverup.

In January 2017, VW pleaded guilty to three felonies, including conspiracy and obstruction of justice, and the company agreed to pay about US$20 billion in criminal and civil penalties. As part of its’ guilty plea, VW agreed to a detailed 30-page statement of facts confessing to it crimes. That document, which under the Canada Evidence Act is admissible in a Canadian court, should have made it easier for investigators at Canada’s Environment Department to prosecute VW Canada, which had sold 128,000 of the same cars here. For unknown reasons, though, it took Canada until Dec. 9 to charge VW—three years later.

Elaine MacDonald, program director of environmental group EcoJustice, has been waiting in frustration for Canadian officials to lay charges. “We have identical emission laws in Canada and the U.S. because of the common market,” she said. ‘It’s just ridiculous. The Americans did all the heavy lifting, all of the fact-finding. It’s ridiculous how long it took. And I can’t answer as to why the foot-dragging happened, whether it was political or resources or a mix of both.”

And the Canadian charges do not go as far as the American charges. VW has been charged with 60 counts under the Canadian Environmental Protection Act—58 charges of illegal importation for each model year and two charges of providing misleading information. The company has not been charged under the Criminal Code, and there is no evidence that investigators referred the matter to the RCMP, although the statement of facts that was part of the American guilty plea is an admission of criminal wrongdoing by the company in the United States.

“The Americans prosecuted and got a guilty plea and fines for fraud and obstruction of justice,” says University of Ottawa law professor Amir Attaran, who has been suing the government to try to force them to prosecute on behalf of Environmental Defence, an environmental advocacy group. “Canada’s so feeble it hasn’t even investigated these offences.”

The environmentalists are also frustrated at the manner in which Crown prosecutor and the court appear to have agreed to allow Volkswagen to avoid scrutiny by avoiding a public judicial pre-trial conference. The charges appear to have been laid only after a plea agreement was reached.

Asked if there was a pre-trial conference before a plea-deal was reached, a spokesperson for the Public Prosecution Service of Canada stated that “as this matter remains before the courts, we have no further information to provide at this time.”

“To move from information laying to resolution in five days, that just doesn’t happen,” said Wright. “There’s a strong inference that you want to get this done as quickly as possible. This is exceptional. It really is.”

The environmentalists would like to know why officials in the government of Justin Trudeau met with Volkswagen’s Canadian president, Maria Stenstrom, in February 2016, five months after the Canadian investigation was launched. Stenstrom and Christopher Vivone, a lobbyist with Edelman Canada, met with political staffers for the ministers of Environment, Transport, Global Affairs and Innovation, as well as Mathieu Bouchard, a senior advisor to Trudeau.

Bouchard played a key behind-the-scenes role in trying to convince Attorney General Jody Wilson-Raybould to order prosecutors to agree to a deferred prosecution agreement that would have allowed the Montreal-based engineering company SNC Lavalin to avoid pleading guilty to fraud in connection with its business dealings in Libya. In August 2019, ethics commissioner Mario Dion found that Trudeau violated ethics laws in applying pressure to Wilson-Raybould, who later left his cabinet in the fallout over the affair.

On Feb. 24, 2016, Bouchard met with Vivone and Stenstrom for a “general discussion on environmental and climate change policy, and vehicle emissions policy,” according to a record Vivone filed with the lobby registry, as required by law.

An auto-parts trade official with Global Affairs, Brian Sundue, said in a Feb. 22 email, obtained via a federal access-to-information request, that Vivone confirmed “that the meeting is 100% about the diesel emissions issue and that they are not looking to discuss trade policy/negotiations.”

Bouchard, who has left the PMO and is now chief of staff to Heritage Minister Stephane Guilbeault, said in an email last week that he did not discuss the investigation with Stenstrom. He said they met to discuss “VW’s ongoing efforts to try to find a technical solution that would allow their cars to actually comply with Canada’s emission standards, as well as the company’s expansion projects in North America.”

A spokesperson from Volkswagen Canada familiar with the matter told Maclean’s that “our discussions with government officials were to update them on the steps the company had taken to address our customers’ affected diesel vehicles.”

Meanwhile, the PMO told Maclean’s the meeting was “to discuss future plans for growth in Canada… including discussions on electrification and digitization.”

An access-to-information request determined that Vivone had no notes or emails related to the meeting, which he said was because “no support was asked from officials in preparation for the meeting and no follow-up requested after it.”

Maclean’s tried to reach Stenstrom through Volkswagen, which declined the request stating she has left the company.

MacDonald, of EcoJustice, doesn’t know why anyone from the prime minister’s office should have met with a company facing charges.
“It seems unusual once they are under investigation be going to meet with PMO on anything related to the issues that are part of the investigation,” she said. “It doesn’t seem right. It seems improper.”

Whether it was improper or not, it seems unwise, because it gives rise to uncertainty in the minds of people who have reason to wonder why the Canadian government has not acted more effectively.

Volkswagen advertised its cars as “clean diesels,” and knowingly cheated at emissions tests in order to sell more of these heavily polluting vehicles, causing respiratory problems, especially among the vulnerable: children, asthmatics, pregnant women and the elderly.
Health Canada has concluded that there is “sufficient evidence to conclude that diesel exhaust is carcinogenic in humans and is specifically associated with the development of lung cancer.”

The best way to discourage companies from secretly poisoning the environment in this way is vigorous enforcement action.

The investigators and prosecutors who handled this file are no doubt diligent and ethical. The result of their efforts, though, falls short of the results obtained by their counterparts in the United States. Only parliamentarians have the power and responsibility to find out why our public servants have failed us. Let them do their jobs and get to the bottom of this.