How labour policy in both Canada and the U.S. affects the spread of coronavirus

Danyaal Raza and Kate Hayman: At a time when social distancing is so critical, those with paid sick days reduce the spread of respiratory infections within communities 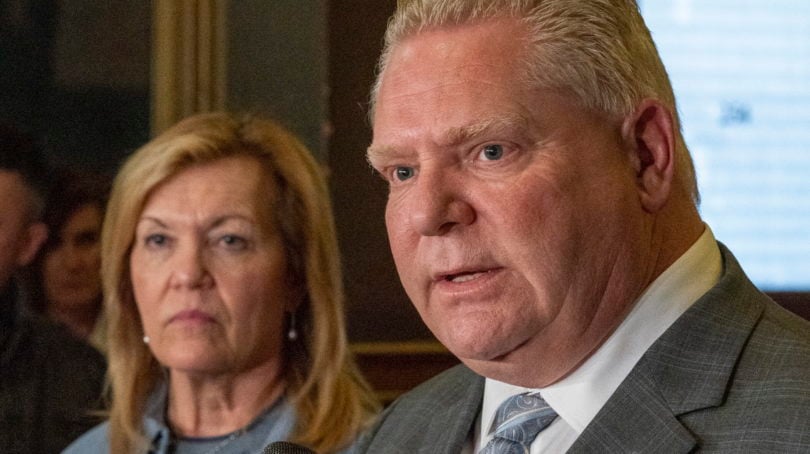 Ontario Premier Doug Ford is flanked by Health Minister Christine Elliott as he answers questions following a meeting of all party leaders and health experts at the Ontario Legislature in Toronto on Mar. 11, 2020. In 2018, the Ford government stopped requiring companies to pay employees for at least two sick days per year. (Frank Gunn/CP)

There are times when a universal healthcare system, free from financial barriers, matters a great deal. There are other times when it is a secondary concern. For Canadians, the COVID-19 global pandemic has done a remarkable job of highlighting both.

So when and why does universal healthcare matter? Many Canadians have become accustomed to being tested and treated when we feel sick, and it has come as a shock to hear of the astronomical financial barriers our American cousins are facing just to access testing for COVID-19. In the face of a public health emergency, American lawmakers have acted to remove some of these financial barriers, waiving co-pays and deductibles for testing. But the core absurdity of a fundamentally broken, profit-driven healthcare system remains: many Americans still face the risk of financial ruin for treatment should hospitalization follow a positive coronavirus test.

Before we pat ourselves on the back too quickly, we should remember there are many people in Canada not covered by Medicare. Permanent residents who have been living in Canada for less than three months are excluded from Medicare in many provinces, including Ontario, British Columbia and Quebec. As well, temporary foreign workers working part-time or between contracts, international students and those who are undocumented are often left uninsured.

When these fellow residents get sick, where do they go when they lack coverage? For them, being presented a bill for medical care is a very real fear. What do they do after they show up to the emergency department needing care for a fever, cough or symptoms concerning COVID-19?

MORE: Will Canada close its border with the United States?

Canadian health workers have been advocating for at least seven paid sick days to ensure that workers can stay home when sick, and additional emergency measures will be needed to support quarantined workers during the coronavirus pandemic.

Without paid sick days, low-income families will only be forced further into poverty. Again, during the H1N1 epidemic, many quarantined workers without paid sick days reported that they couldn’t pay bills as a direct result of lost income. Workers will have to choose between paying rent, feeding their children and protecting the health of the public.

Our governments are taking some initial steps. In Canada, Trudeau recently announced that the one-week waiting period on accessing Employment Insurance (EI) would be waived for those affected by quarantine. While this is promising, EI only compensates workers at up to 55 per cent of their prior earned income (and many workers don’t even qualify). At this level of pay, minimum-wage workers will fall deeper into poverty.

In the U.S., Democratic Senators Patty Murray and Rosa DeLauro introduced an emergency paid sick days bill calling for seven days of accrued paid leave with an additional 14 days of paid sick leave immediately available during a public health crisis. Republicans quickly blocked their attempt to pass the bill without a vote. Canadian legislators need to demonstrate wisdom here, and should consider the U.S. paid sick days proposal as a starting point.

There are of course, many factors at play in this crisis, including the availability of coronavirus testing, social distancing measures and strong public health leadership. We do not pretend to offer any silver bullets with these policy prescriptions. But to neglect them compromises our ability to respond given every tool we have available.