How Stormy Daniels is closing the credibility gap for women

Opinion: #MeToo is about sexual assault, but also about the worthiness of women as credible narrators—and Stormy Daniels is among those leading that charge 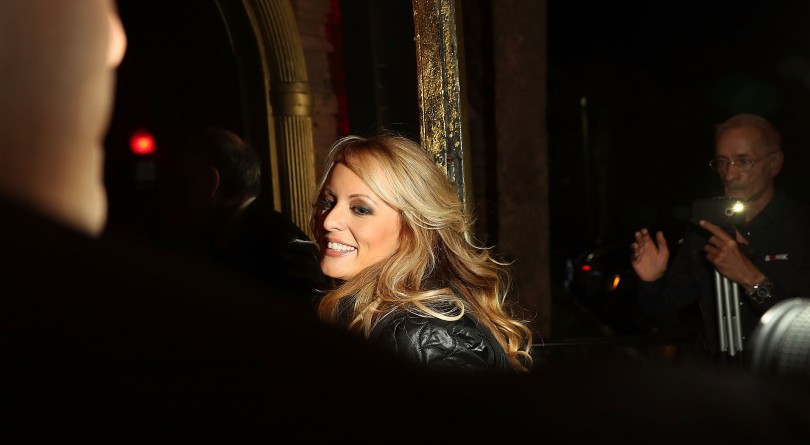 POMPANO BEACH, FL - MARCH 09: The actress Stephanie Clifford, who uses the stage name Stormy Daniels, arrives to perform at the Solid Gold Fort Lauderdale strip club on March 9, 2018 in Pompano Beach, Florida. Stephanie Clifford who claims to have had an affair with President Trump has filed a suit against him in an attempt to nullify a nondisclosure deal with Trump attorney Michael Cohen days before Trump's 2016 presidential victory. (Photo by Joe Raedle/Getty Images)

Laurin Liu was an NDP member of Parliament representing the riding of Rivière-des-Mille-Îles between 2011 and 2015. She is the youngest female member of Parliament elected in Canadian history and recently completed a MSc in Human Rights at the London School of Economics.

Last month, 22 million viewers tuned into Stormy Daniels’s interview on 60 Minutes with Anderson Cooper. In it, Daniels, an adult film star who allegedly had a sexual encounter with President Donald Trump in 2006, appears calm, collected, and—many agreed, with something that resembled incredulity—credible. The interview revealed details about Daniels’s bizarre sexual encounter with Trump—and damning allegations that she was threatened by a strange man in a Las Vegas parking lot to protect Trump’s reputation. But the element of crucial importance to most observers about Daniels’s story is that she was allegedly paid $130,000 by Trump’s lawyer, Michael Cohen, to sign a non-disclosure agreement about the affair, days before the presidential election.

The Stormy Daniels story is about many things: power, corruption, and the possibility that the payment of hush money contravened election law. But it’s also an important litmus test concerning the way we view the credibility of women in 2018—especially those whose stories pose a threat to powerful men.

In her 2014 essay “Cassandra Among the Creeps,” Rebecca Solnit uses the story of Cassandra, daughter of the king of Troy, as an archetypical example of a woman who was not believed even though she told the truth, in a sort of reverse parable to the Boy Who Cried Wolf. The gender credibility gap means that women are less likely to be believed when they make certain claims, because they are believed to be inherently less competent or trustworthy. In other words, in an exchange of he-said-she-said, the former is likelier to win.

We’ve seen this play out in politics, in media and in the justice system, most emblematically in the harsh cross-examinations to which victims of sexual assault are subject. It is no surprise, then, that the accusation of liar frequently serves as a sword of Damocles hanging over many women who might otherwise come forward to tell their stories.

Meanwhile, President Trump has weaponized the vilification of women as liars throughout his political career. On Oct. 22, 2016, in the heat of the presidential campaign, Trump bellowed with characteristic machismo: “Every woman [bringing forward accusations of sexual misconduct] lied when they came forward to hurt my campaign. Total fabrication. The events never happened. Never. All of these liars will be sued after the election is over.”  Call a woman a liar, and chances are, the problems that accompany their accusations will go away. But on Daniels, the label somehow refuses to stick.

Then comes slut: a word that follows liar, and another accusation that slides off Daniels like water off a duck’s back and has resulted in spectacular ripostes to her online trolls. In response to a one-word tweet calling her a “slut,” Daniels added a single-word reply of her own: “Yes.” In another tweet, she clarifies: “Slut and whore are words used by people who feel threatened. I find power in them.” Her own story and refusal to shrink from the public eye challenges preconceptions about sex work: namely, the assumption that those in the sex industry forfeit their right to autonomy and human dignity. Sex workers, she points out, can be sexually assaulted too.

This liberating and dignifying view of female sexuality, coming from Daniels, is refreshing and humanizing. This is perhaps why one of the most arresting moments of her 60 Minutes interview was the recounting of her reaction when she returned to the hotel room in which she met with Trump to find him expectantly “perched” on the edge of the bed. Speaking with nervous laughter, she noted: “I realized exactly what I’d gotten myself into. And I was like, ‘Ugh, here we go.’ And I just felt like maybe…I had it coming for making a bad decision for going to someone’s room alone and I just heard the voice in my head, ‘Well, you put yourself in a bad situation and bad things happen, so you deserve this.’ ” As conversations have multiplied, especially in recent months, about the gendered expectations that pressure women into engaging in unwanted sexual behaviour to appease men, Daniels’s inner monologue sounds painfully familiar. For many men, Daniels is believable; for many women, she is not just believable, but relatable.

It is impossible not to view the Stormy Daniels moment as a post-#MeToo phenomenon, even though she stressed that sex with Trump—though unwanted—was consensual, and that she did not consider herself to be a victim (in a tweet, she further emphasized that she was not playing the “#MeToo card”). This is because #MeToo was never just about sexual assault—it was also about the worthiness of women as credible narrators. By staking out her place in the public realm and refusing to go away, Stormy Daniels is a sign of the times—and an avatar for women everywhere who have waited years for a moment when they will be able to tell their stories, and be believed.