Opinion: Tabatha Southey envisions 'The Best of All Possible Worlds Wherein the Munk Debates Still Didn’t Figure Out That Inviting Bannon Was A Bad Idea' 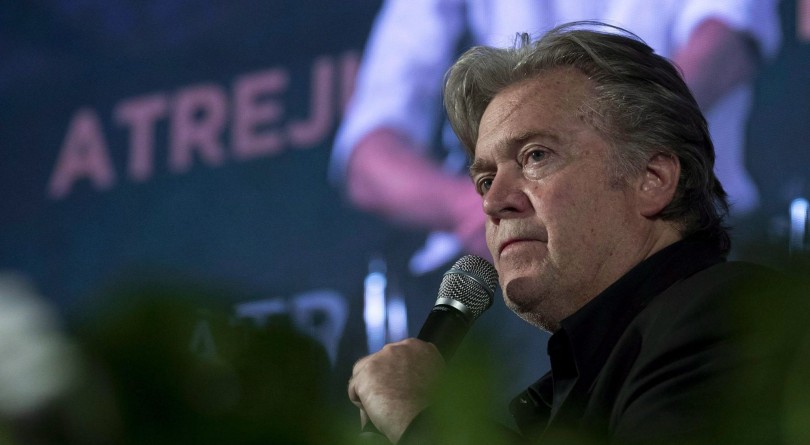 Steve Bannon addresses a forum in Rome, Saturday, Sept. 22, 2018. Former Trump strategist Steve Bannon declared Saturday that far-right "patriots" are the "new elite" of Europe as he brought his push for a trans-national, anti-European Union drive to Italy. The ex-aide to U.S. President Donald Trump addressed a forum in Rome organized by a small far-right Italian opposition party. Bannon was asked if there should be a new "elite" in growing, far-right populist movements. His reply? The "new elite in this populist movement are the patriots" in society. (Massimo Percossi/ANSA via AP)

Last week, Steve Bannon gave a talk to 25 people at a Holiday Inn Express outside Topeka, Kan. Some of those attendees may have been there to support Republican congressional candidate Steve Watkins; also, there were pastries. Watkins’s team attempted to distance itself from Bannon, denying that the event billed as “Red Tide Rising”—there are just so many products for that now—was held for their man.

It’s fair to say that most reputable organizations and news outlets can’t get far enough away from Bannon these days—and there is, I understand, heated competition among his garments to see which shirt gets to be the outermost shirt. Yet, this week in Toronto, more than 2,000 people paid up to $100 for a ticket to crowd into the Munk Debate, which featured Steve “Let them call you racists. Let them call you xenophobes. Let them call you nativists. Wear it as a badge of honour” Bannon.

“Be it resolved, the future of western politics is populist not liberal” was the resolution, with David Frum opposing, not all that effectively. I would suggest to the Munk Debates that the next time, if you sincerely want the case for liberalism made, you find an actual liberal to make it.

We were assured by the debate organizers that they were offering a “public service” by allowing ideas to be “vigorously contested.” Those ideas include, to quote Bannon: Hillary Clinton is “a f–king bull d–e,” and Jared Kushner is a “globalist” (a word you may have tragically been hearing a lot about recently) and “a cuck.”. Or perhaps they were just counting on a different one of  Bannon’s faces being shown to their particular audience, and oblivious to the the fact that therein lies the problem.

I would of course like to imagine a better world—a world in which, faced with a washed-up alt-right provocateur who won’t stop shouting “Look at me, pay attention to me and my multiple layers of black shirts,” the people in our society with the power to decide which of us is resuscitated upon a celebrated international platform and which of us can toddle off and secure themselves a Youtube channel, stared blankly and asked, “Sorry, which racist blogger are you again?”

But sadly, even in my wildest dreams, I have trouble picturing a world in which the people behind events like this stop chasing white nationalist ticket-bait. The best I can do is bring you this special speculative report from The Best of All Possible Worlds Wherein the Munk Debates Still Didn’t Figure Out That Inviting Bannon Was A Bad Idea.

I know most of you would prefer to read about the Best of All Possible Worlds With No Caveats. You’d probably like to hear how the people of that world have all come together in harmony to create an Earth without starvation, or disease or war, instead of gathering in evening wear to be titillated by a neo-Nazi and then go for gnocchi. Sadly, my amazing power to perceive alternative realities is limited only to those eminently reachable timelines wherein the organizers of the Munk Debates still can’t quite grasp the concept that legitimizing crypto-fascists is a really terrible idea, so you’ll have bear with me when I tell you that in a better world, this is what the debate looked like:

It began with Steve Bannon staring down his opponent, an inflatable arm waving tube man with the name “DAVID FRUM” on it in Sharpie that Bannon had kidnapped from outside a vape store and defaced on his way in from the airport. In this better-but-still-pretty-garbage world, Bannon was forced to debate this more literal windbag because the actual Frum, along with just about everyone on the planet outside of those charged with the task of organizing the Munk Debates, refused to participate in the event. Frum bowed out on grounds that “What? No, hell no. Bannon’s a goddamn fascist. Besides, I’m already booked up taking a brave stance against President Trump’s racist nativism by saying his critics aren’t nativist enough.”

Even in all the infinite possibilities of the multiverse, there is an upper limit on the judgment of David “Iraq’s going so great, let’s do North Korea and Iran next!” Frum.

Alternate-Universe Good-Judgement David Frum did say that while he wouldn’t show up, he’d obviously be the best choice to stand against a racist far-right populist. “Remember how I spread a conspiracy theory I picked up from a blog, claiming that photos of two bloodsoaked young Palestinian men accompanying their wounded father to hospital were ‘fake atrocity photos’ cooked up by ‘Hamas?’ I’m practically the Sherlock Holmes of mindlessly repeating things I read on the internet—just the man to take on the former executive chairman of Breitbart News.

“Do I have the moral high ground from which to oppose a crypto-fascist propagandist? Recall that when propping up a racist conspiracy theory became untenable, I issued an ‘apology,’ primarily to the white photographer and not at all to the innocent men I accused of being theatrical terrorists. Why, 381 out of the 618 words of my mea minima culpa were dedicated to explaining how I’d usually be right to unquestioningly assume the worst of Palestinian civilians. That’s character. That’s the kind of man you want defending the liberal world order.”

I would recount the debate, and tell you how Bannon spoke to a crowd that mostly had no skin in the game—so, skin that doesn’t routinely get stopped at the border or on the street where it lives. I’d tell how he played the bad boy who you’d still bring home to sit on dad’s board of directors. I would give a play-by-play of how his inflatable opponent bobbed about a bit and spewed some righteous air, none of it effective at doing anything other than presenting Bannon as an important person worthy of serious debate. But there’s no universe in which listening to Bannon isn’t a waste of time, so instead I’ll tell you about the people who showed up to watch the event.

In this better world, the debate did not sell out the vast Roy Thomson Hall. In fact, in this less fascist-friendly reality, the debate had to be held at a laser-tag spot where management had been led to believe the event was a birthday party for a really sweet six-year-old named Kevin.

Exactly 11 inhabitants of this brighter alt-reality chose to spend their time watching Bannon promote himself. Six of these people had just been following him since his speech in Topeka, shouting “Hey, Bannon my Mannon!” before joining him at breakfast every day.

“I’m with the Bannon. I dislike people who look different from or speak different languages than myself almost as much as I like pastries,” one of the Bannon followers said. “But there don’t seem to be any cinnamon buns here, so I think I might find myself a new white supremacist to tag along with.”

A lovely young couple dressed as Cyclops and Emma Frost from X-Men seemed confused by the entire event. “We heard ‘Bruce Banner’,” Cyclops sighed. “We thought the Hulk was going to debate some cartoonish warmonger, so we figured this was, like, a Comic-Con thing.”

“But it’s just that one weird guy cosplaying as the bottom of a messy Ikea wardrobe,” the costumed Emma Frost said, halfheartedly laser-tagging the former White House chief strategist.

Another few attendees were journalists in distress. “The venue’s not licensed!” a Washington Post correspondent cried out in despair. “We’re going to have to cover this thing stone-cold sober.”

“God save us all,” a New York Times photographer cut in. “Bozo, the moderator, just marched out the door in his big shoes. Apparently he was told he was booked for Kevin’s party and he and his ‘wacky balloon animal friends’ don’t want anything to do with ‘that two-bit racist propagandist.’ There’s nothing to stop Bannon talking now!”

“Don’t worry, be happy!” one attendee sang out, although on closer inspection he turned out to be a Big Mouth Billy Bass.

“Hey! Don’t touch Billy, he’s my only friend!” shouted the man largely behind Donald Trump’s Muslim travel ban before a long-suffering janitor could turn off the musical animatronic fish that Bannon had hung haphazardly on the wall.

All and all, these alternate-reality debates reminded me of Bertrand Russell’s 1962 letter in which he declined to debate fascist leader Oswald Mosley. “It is always difficult to decide on how to respond to people whose ethos is so alien and, in fact, repellent to one’s own,” he began, concluding with: “…The emotional universes we inhabit are so distinct, and in deepest ways opposed, that nothing fruitful or sincere could ever emerge from association between us.” (This, in our current reality’s parlance, would be called a “burn,” and I would very much like us to collectively re-discover that concept the oh-so-very-pro-free-speech Russell obliquely referred to in that letter, the idea of a place called “beneath debate.” Then I would like us to troop over there with some shovels and bury Steve Bannon under it.)

“Debate him!” we hear quite often now, echoes of the school yard “Fight! Fight! Fight!” There is a fashionable misconception going around that knowledge is arrived at through debates, rather than the much less sexy process of research, publishing, and peer review.

The truth is that while debates can be fun to watch and some people are very skilled at doing them, debates very seldom change anything, especially minds. In fact, in the real-life debates, the audience vote found that “opinions remain entrenched—neither side wins,” as the Munk Debates tweeted, after announcing that Bannon had won. It’s fitting that the Munk masquerade ball ended with fake news. These kinds of things are mostly advertisements for the people involved. Debates are the exhibition basketball of academia and politics.

Regardless of whom public opinion deemed the “winner” of our all-too-real Bannon vs. Frum debate, merely placing Steve “Camp of the Saints” Bannon up on that stage only boosted his rightly flagging mainstream influence. People like to endlessly chide that “Sunlight is the best disinfectant”—but the truth is, no one ever chased off a desperate showman with a spotlight.