How Tim Hortons lost its way 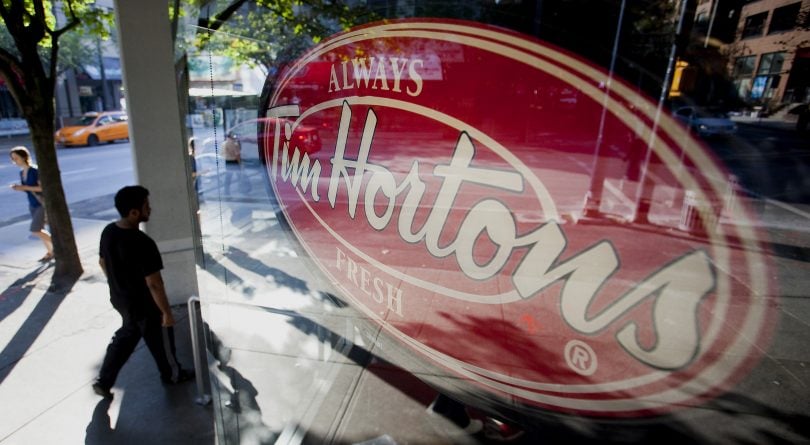 Burger King Worldwide Inc. agreed to acquire Tim Hortons Inc. for about C$12.5 billion ($11.4 billion) in a deal that creates the third-largest fast-food company and moves its headquarters to Canada. (Ben Nelms/Bloomberg/Getty Images)

Corey Mintz is a food reporter who has written for the Globe and Mail, TVO and The Walrus. His focus is the intersection between food with labour, politics, and culture.

It’s Saturday morning and my father-in-law Gord is in town to help with our renovations, so I’ve gone to Tim Hortons to pick up coffee and something to eat. Right away you know that this story is at least partially crap.

I’m a snooty food writer. So just like every politician stopping into Tim’s for a “double-double” on the campaign trail, I’m faking a bit, engaging in the cynical populism of sham fealty to Tim Hortons.

That presumed, folksy simplicity is why the menu at Tim Hortons these days is so strange, so far off from their successful, strategic targeting of working-class Canadians. Belgian-waffle breakfast sandwich? Omelette bites? Salted-caramel iced capp?

Didn’t Tim Hortons used to sell coffee and doughnuts? How did they lose their way?

There’s nothing inherently wrong with a waffle sandwich. Done well, it could be a transcendent contrast of crispy and creamy, salty and sweet. Here at Tim’s, under the demands of streamlined preparation and service, it’s an unholy thing—ingredients cooked long in advance and kept in limbo between life and death by warming trays. When ordered, precooked discs of egg and sausage are removed from their resting chambers and bundled with processed cheese between two small waffles. The result? A sweet sponge that contains 18 grams of sugar, the equivalent of four teaspoons—you may as well start your day with a Snickers bar.

But this is not a mom-and-pop store built by and for your community. Tim Hortons is the second-largest coffee chain in the world, with franchise operations in countries like Spain, China and the United Arab Emirates. It’s owned by the massive hospitality company, Restaurant Brands International (RBI), a subsidiary of Brazilian-American investment firm 3G Capital. In May, RBI announced its plans to expand Tim Hortons’ footprint, adding 14,000 new Tim’s, Popeye’s and Burger King locations over the next eight to 10 years, going from a mind-blowing 26,000 to 40,000 eateries globally.*

And though we see Tim Hortons flailing about, composing menus that read like a food-trend Mad Libs—Mango Creamy Chill, Beyond Sausage Farmer’s Wrap, Brown Butter and Sea Salt Dream Doughnut—this is not aimless change for the sake of change. It’s a company going through the necessary experimentation to adapt to a marketplace that’s experiencing massive upheaval due to third-party food delivery apps like Uber Eats and Foodora that have identified millennials’ thirst for convenience, as well as looming automation across the food industry as a whole.

Last week, Tim Hortons opened their first-ever ‘innovation café,’ a boutique joint in Toronto’s financial district, replete with gourmet doughnuts, “Italian” muffuletta sandwiches and “nitrogen-infused” cold brew. Nearly double the price of their standard doughnuts, these fancy two-dollar doughnuts might be anathema to their core consumer. But we already know this isn’t for them.

It’s about targeting the demographic that will happily pay five dollars for a luxury doughnut if it’s considered a desirable, shareable experience; customers who will queue, take a picture and promote the product on social media. The question is whether the doughnut is any good.

People love to score points off of Tim Hortons coffee, either dunking on it for being bad, or pandering to a wider audience by praising it as the best. I have no dog in that fight. I do believe, however, that debate over Tim Hortons coffee is a missed opportunity to point out that their doughnuts are terrible.

The basic chocolate-dipped is gummy and tasteless. In a blind taste test, one would never guess that the brown coating is supposed to be chocolate. The upscale doughnuts are exactly as good as the price point suggests, which means they’re better, but still lousy. They’re fresh, and would have to be, given the volume the prototype location is doing. And the glazes and frostings have creamier textures than the standard Tim Hortons shellac. But the promised, delicate flavours—brown butter, vanilla bean—are more present on the menu than the nose or tongue. You have to look back at the names to remember what you’re supposed to be tasting.

MORE: The Tim Hortons brand is badly broken. Here’s how to fix it.

Fast food used to offer price, speed and convenience; an outpost in every neighbourhood was a selling point. But in the last five years, food-delivery apps put an end to that. Third-party apps have made restaurant food available with zero effort, devaluing the ubiquity and speed that the Tim Hortons chain once held as an advantage.

If fast-food companies can’t be faster and easier, they have two choices: be cheaper or better. But with the cost of ingredients, fuel and labour constantly rising, they can’t lower prices. So they chase trends and offer the kind of Insta-bait-type food that gets people in the door these days. I can’t help but think of Taco Bell’s current campaign on “chachos” (nachos with pieces of fried chicken in place of chips). One thing’s for sure: it’s not food, it’s marketing.

How didn’t we see this coming, anyway? If we’re going to be mad at Tim Hortons for these outlandish menu expansions, our outrage is as manufactured as the company’s Canadian image.

Tim Hortons hasn’t sold coffee and doughnuts exclusively since before 1981, when muffins and cookies were introduced, followed by croissants (1983), chilli (1985), bagels (1995), lattes (1997) and so on. These are additions, not changes. They don’t stop anyone from buying and enjoying the original products. The 2014 sale to 3G however, was more than cosmetic; Tim Hortons had plans to scale. After 3G acquired Burger King in 2010, the merged companies rebranded as RBI, which then gobbled up Popeye’s. The current plan for Tim Hortons, which includes building 1,500 locations in China alone, would be unthinkable without the backing of RBI.

While marketing themselves as compassionately Canadian abroad (the equivalent of the American traveller who sews a Canadian flag onto their backpack), at home, the strategy is carnival food to lure in rubes and merciless management to cut costs.

In response to a minimum wage raise in Ontario, some franchise owners cut employee benefits and paid breaks. Following public anger, the Great White North Franchisee Association, which represents some Canadian Tim Hortons franchise owners, defended the measures based on head office’s refusal to let franchisees raise prices. Worse, a Cobourg location that eliminated paid breaks and asked employees to pay for uniforms, is owned by the son and daughter of founders Ron Joyce and Tim Horton. That plays less like the benevolent supporter of children’s hockey teams and more like out-of-touch royalty.

MORE: Tim Hortons’ reputation is tanking after a year of stumbles and bitter feuds

Last year, Tim Hortons reported its eighth consecutive quarter of falling same-store sales; a measure used on locations that have been open for a year or more. That’s not good for franchisees, who invest in a location and fork over a percentage of sales under the belief that the company’s reputation and guidance will guarantee revenue.

The degrading reputation of the brand, brought about by penny-pinching cruelty to employees, was entirely predicted, based on 3G Capital’s reputation for cutting costs at the companies they purchase.

Consumers do have short memories, so the damage may not be irreparable. But the incident has ended the suspension of disbelief that’s maintained the company’s image as “Canadian,” the benevolence that “every cup tells a story.” In the long term, I suspect none of this will matter. The scaling of Tim Hortons cannot outdo the scaling of food-delivery technology, as well as the resulting job loss as the fast-food industry moves towards automation.

McDonald’s recently announced a revamp of their menu that includes a fine-tuning of hamburgers: changing bun dimensions to retain heat better, more sauce, cooking patties in smaller batches and pressing down less to retain juices. Have they been making burgers wrong for 64 years? It seems ill-advised, for a company famous for its assembly-line cooking—and one that’s feeling the pinch of high-labour costs at that—to make its menu more labour-intensive. Unless they’re betting that humans won’t be cooking it for much longer. (Hint: they’ve been automating cashiers with kiosks since 2015.)

If this seems like science fiction, check out Creator, a San Francisco burger restaurant where all the cooking is done by machine. There are still human staff members to restock the burgerbot with beef, pickles and tomatoes. But the machine, which doesn’t require wages or breaks, slices onions, cooks patties and dispenses burgers. And if you can teach a robot to cook burgers, you can get it to make tacos, lattes and doughnuts, too. Spyce, in Boston, is already taking this idea to the next level with an automated kitchen.

Within five years, as these devices are adapted to mix batter, pour a double-double and assemble a Beyond Sausage Farmer’s Wrap, jobs will disappear by the thousands. And with them, any romantic pretense that a chain the size of Tim Hortons represents working-class Canadians. When that happens, they will need to be about something else.

CORRECTION, Aug. 14, 2019: A previous version of this story stated that RBI had plans to expand Tim Hortons’ footprint globally, from 26,000 to 40,000 over the next eight to 10 years. In fact, RBI’s expansion plans include their other brands—Popeye’s and Burger King—too.