How to deal with a hostage-taking, extortionist China

Shannon Gormley: As China decides to no longer hide behind the language of engagement and friendship, Ottawa finds itself increasingly exposed 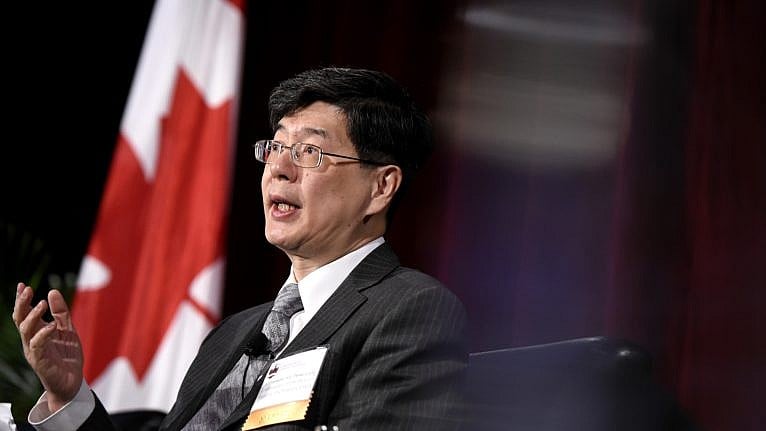 Ambassador of China to Canada Cong Peiwu speaks as part of a panel at the Ottawa Conference on Security and Defence in Ottawa, on March 4, 2020 (CP/Justin Tang)

If you help our people, we will hurt your people. It’s a chilling message, coming to Canada directly from the world’s largest dictatorship, but as far as extortion goes China’s pass at it at least offers some relief. There’s an elegance to its plain-stated malevolence, a comfort in the acknowledgement of what was always true and always denied. It forgoes the usual gaslighting about “friendship” and “engagement”, makes no nonsensical appeals to “prisoner swaps.” Just: Look away or we’ll take hostages.

Beijing’s words, then, are at last as clear as its abuses of power and human rights have always been. Consider the  message from its ambassador this month: If Canada “really cares about the good health and safety of those 300,000 Canadian passport holders in Hong Kong and the large number of Canadian companies operating in Hong Kong,” he told the Globe and Mail—if it “really” cares—it will not grant asylum to protesters fleeing Beijing’s political persecution.

The statement is remarkable in its malicious candour, though perhaps less for its maliciousness than for its candour. A different sort of diplomat—say, a diplomatic one—might have wondered if perhaps he’d said too much. But our country’s honoured guest was on a roll. Beijing, he added, would also respond with a “strong reaction” if our parliament so much as breathed a negative collective word about China’s persecution of its Uyghur people. (Soon after, a parliamentary committee did breathe a word, and the word was “genocide,” and the word Beijing used to dismiss that word was “rumour.”)

Asked whether his obvious threats were indeed threats, the ambassador replied, “That is your interpretation”— which is to say, the only interpretation remotely possible. Indeed, days later, we learned Beijing has been inviting Washington to make some interpretations of its own, warning that if the United States Department of Justice does not succumb to pressure to drop prosecutions against several alleged Chinese spies, Americans in China might suddenly find themselves in violation of Chinese law, just as our two innocent Michaels have done.

If only Beijing were content to continue demanding liberal democracies merely subvert the basic tenets of their own judicial systems. By instructing Canada to refuse asylum to Hong Kong protesters, Beijing not only requires that we give certain Chinese citizens, like Huawei executives, the special privilege of evading justice, but requires that we deny other Chinese citizens their rights under international law.  Moreover, by instructing Canada to remain silent about the Uyghur genocide, Beijing not only requires that we deny its victims the international recognition their oppression deserves, but that we deny ourselves the right to speak of it.

It is no longer enough that China persecutes its own people with abandon. It must be free to persecute whomever it wishes wherever it wishes, without any danger of either the persecuted finding sanctuary or the persecutors facing criticism abroad. Whenever China does something that the world cannot possibly stay out of—either because the matter involves international treaties and laws, or because other countries have a stake in the matter, or simply because it is too abhorrent to ignore—China demands that the world stay out of it, with the admonition to “respect China’s internal affairs.”

But Canada’s response to China’s behaviour is not China’s internal affair. How a country applies its asylum policy is its own affair. What its parliamentarians choose to praise or condemn in their own parliament—that, too, is its own affair. Canada is not threatening to storm the casinos of Macau or summit the mountains of Xinjiang and plant a maple leaf flag. It is making decisions about whom to admit, and what it wishes to say about the beliefs it holds. That is a matter of our internal affairs.

As China has decided it need no longer hide behind the language of engagement and friendship, however, Ottawa finds itself exposed. Our government must now be just as  resolute as Beijing, or risk Canadians having an unobstructed view of its pusillanimity. It has spoken more soberly about China of late than is characteristic of a government whose own minister once hawked Canadian ice cream in Beijing mere months after it kidnapped our citizens; a few weeks ago, that same minister stood in an unfriendly ballroom in the same city and reiterated Canada’s call for our citizens’ release. And to Beijing’s ambassador, our Prime Minister has said, “We will stand up loudly and clearly for human rights all around the world.”

Will he? China has been admirably clear about its beliefs. Will our government be as clear about ours? Does it have the moral clarity to face the expanding threat of China head-on? Does it understand we have no choice?