How to help students in distress

Christina Gonzales: Is enough being done to identify people who are struggling with the transition to post-secondary education? 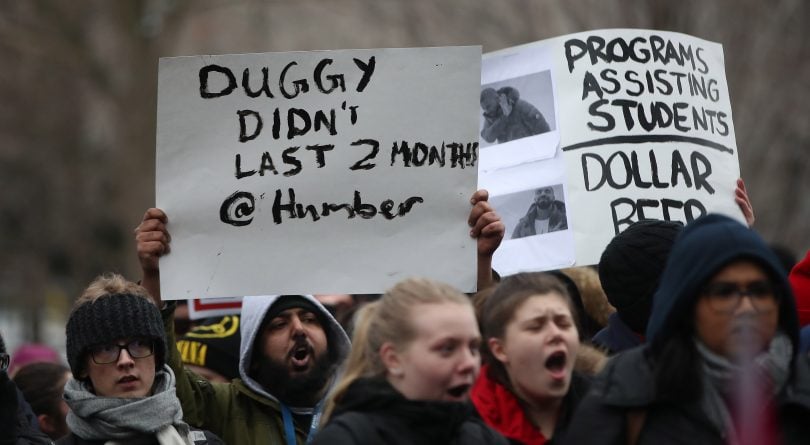 Students hold up a signs and chant. The Canadian Federation of Students (CFS) held an Emergency We Are the Students Rally at Queen's Park to protest the cuts to OSAP and campus groups that accompanied the planned 10 percent tuition reduction at Queen's Park in Toronto. January 18, 2019. (Steve Russell/Toronto Star/Getty Images)

When I was accepted into Queen’s Commerce program back in 2005, my parents were filled with pride. I’ve always been a quick learner, and thus, I don’t remember a time when my Filipino-immigrant parents didn’t set a high bar. In both elementary school and high school my grades were above average and I exhibited a natural ability for the creative and performing arts.

All of the ‘smart’ kids at my high school applied to business school. So I did too, and I was subsequently accepted to Queen’s School of Business. For my parents, my acceptance into the program was more than just a commerce degree; it symbolized the intellectual opportunity and career equity that they never had the agency to exercise in Canadian society.

If they couldn’t have the Canadian dream, fine. But their daughter would.

The acceptance came with a hefty price tag—some $30,000 per year in tuition, learning materials and living expenses. The monetary burden my parents took on only added to the pressure that I felt as an 18-year-old—I had no other choice but to continue my academic streak.

In first year, when I began to struggle in my finance and accounting courses, I didn’t seek help. When I realized, about halfway through the year that my average might fall below 65 per cent, the minimum necessary to stay in the program, I still didn’t ask for help. I continued to go about my days at Queen’s like nothing was wrong, and when I went home to Toronto to visit my parents, I projected a picture-perfect student; the daughter I’d always been.

It wasn’t until the end of first year, when I was forced to transfer out of commerce and into linguistics, that I told my parents the truth. My dad didn’t take the news well. And for years, even after I obtained an undergraduate degree from Queen’s, he still wouldn’t let it go.

My experience was hardly a unique, Asian-Canadian experience. I spent my childhood surrounded by other, high-achieving friends whose parents epitomized the term “tiger parent.” No matter the household income, the immigrant parents I knew personally always found a way to set their kids up for a brighter future—Kumon classes, piano lessons, swimming, you name it—even at the price of their children’s happiness. And while it all sounds cliché, I found there were two trajectories for my Asian-Canadian cohort: rebel, or excel.

It seems as if Menhaz Zaman*, the 23-year-old Bangladeshi-Canadian man who allegedly murdered his parents, grandmother and sister inside their Markham, Ont., home on July 28, also grappled with the weight of his parents’ expectations. He claimed to have committed the crimes because he didn’t want his parents to view him as a failure: Vice News published screenshots of Zaman explaining his alleged motives to group members on Discord, a chat app for gamers; “I did this because I don’t want my parents to feel the shame of having a son like me,” he wrote.

MORE: What does a university education cost in Canada?

What unravelled was the profile of a student who was ill-equipped—mentally, emotionally and academically—to transition from high school into a post-secondary mechanical engineering program.

After skipping out on classes and flunking half of his courses in first year, Zaman told the Discord chat group that he felt depressed and began lying to his parents, spending his days at the mall and gym. “Literally told my parents my uni graduation was July 28,” he wrote on the night of the alleged killings. “I couldn’t have delayed it any longer.”

But Zaman’s story is not new. In 2015, Jennifer Pan, the Vietnamese-Canadian woman who staged a home invasion to murder her parents (her mother was killed, her father survived), was sentenced to life in prison without parole for 25 years. Pan too, lied to her parents about her achievements as a post-secondary student. In fact, Pan, who was an average student in high school, got early admittance to Ryerson University, but she failed calculus in grade 12 and wasn’t able to graduate. If only Pan could just repeat the class. But she fell through the cracks, and the Ryerson admittance was withdrawn.

The parallels between the Zaman and Pan cases are chilling. Though they’re two very extreme cases, and the motivations behind them are not clear, they are parallels to draw from.

MORE: To Doug Ford being for the students means reckless OSAP cuts

In a 2014 study titled My Mother and Me: Why Tiger Mothers Motivate Asian Americans but Not European Americans, Stanford researchers Alyssa Fu and Hazel Markus outlined two distinct philosophies on motivation. The Western notion, they wrote, is that motivation comes from an individual, while the Asian belief is that children find strength in their parents’ expectations. The research states both are equally effective parenting styles.

While I don’t doubt that the research is valid in many cases, I can’t help but think back to all the times when my own Western values conflicted with my parents’ Eastern approach to childrearing. Asian-American lawyer Ryan Park has similar sentiments, which he details in a New York Times article called “The Last of the Tiger Parents.” Park said he spent decades struggling with the paradox of his upbringing.

In the piece, he poses this question to readers: “Were the same childhood experiences that long evoked my resentment also responsible for my academic and professional achievements?”

Although the communication divide present in the households of immigrant parents and Western-born-and-raised children shouldn’t be policymakers’ problem, the fact that students from marginalized homes are struggling with the transition from high school to post-secondary, is.

Historically, Canadian provinces haven’t collected data on race and its correlation to student successes and attrition. But a 2018 study published by researchers at York University, McMaster and the Toronto District School Board on some 33,000 grade 12 students in Toronto, found that black, Latino and Southeast Asian students were less prepared for post-secondary education compared to their white counterparts due to systemic, early-life disadvantages. They assert that if early-school experiences are improved, this would increase later-life chances at post-secondary success.

If marginalized youth are already predisposed to the challenges of post-secondary education in elementary school, the ones that make it to college or university should, at the very least, be armed with the resources they need to thrive.

Post-secondary institutions like Wilfred Laurier in Waterloo, have an answer for struggling first-year students. The university employs an early-alert program: if faculty identifies that a student’s behaviour has changed in the classroom, or they’re failing to keep up with their assignments and courses, the concern is flagged to the student’s academic advisor who determines the next step.

“We started early-alert advising (writing and math) efforts quite intentionally as far back as 2006 when we opened the department of learning services,” says David McMurray, Vice-President of Student Affairs at Laurier. “We discovered through research and practice that the earlier students were connected with specialized teaching programs to support their learning, the better they did both inside and beyond the classroom, earning better grades and becoming more engaged in meaningful campus activities.”

But early-alert relies on instructors, who are already overworked. Kristiina Montero, Associate Vice-President of Teaching and Learning at Laurier says that the university also uses “care reports,” which are open to students too, should they sense that a friend or classmate is in distress—engaging in self-harm, having distortions of reality or exhibiting odd changes in behaviour. The care report is escalated, if necessary, and the student is invited—in a non-threatening way—to meet with university staff.

Confederation College in Thunder Bay, after identifying that 22 per cent of self-identified Indigenous students dropped out after the first term in first year (almost twice that of non-Indigenous students) realized they needed a fix. That fix came in the form of an “auntie,” assigned to Indigenous students (most of whom, come from families with no college history). The “auntie” guides students through their first semester.

With the Ford government’s new performance-based post-secondary education funding plan, who knows whether student-retention initiatives like Laurier’s care-report program and Confederation College’s “auntie” can be maintained, despite being badly needed.

Like me, Zaman and Pan had parents, who by all accounts, wanted the best possible economic outcomes for their children. But Zaman and Pan slipped through the cracks. Policymakers and educators should do more to make sure no one else does.

CORRECTION, Aug. 14, 2019: A previous version of this story stated that Menhaz Zaman was enrolled in the University of Toronto’s mechanical engineering program. In fact, due to privacy laws, Zaman’s enrolment at U of T—or any other Ontario university—cannot be confirmed or denied.