How Trump and Putin are alike in one particular way

Shannon Gormley: Both men may exalt imperialism and racism as examples of the only moral virtue they recognize—domination—but the most important thing for both is that their political ventures pay 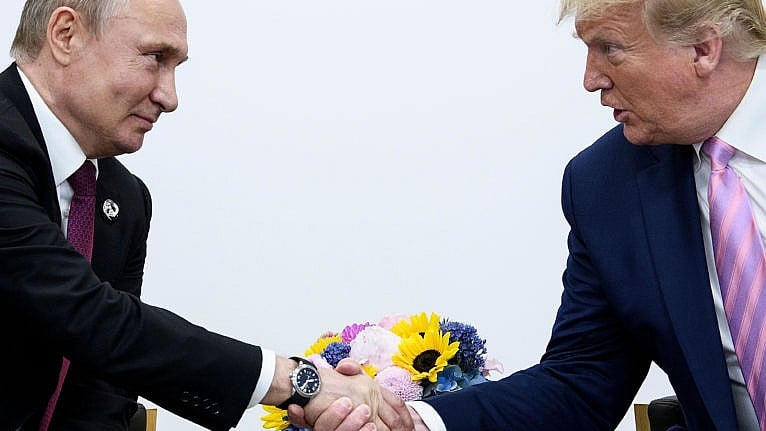 A riddle: which president in the last half-decade sought the company of well-turned-out women who sought the company of well-to-do men who were married to other well-turned-out women; used his wealth to become president and used his presidency to increase his wealth; boasted of the size of his wealth but would not reveal its specifics; put much of his wealth into his many real estate holdings; and, for these real estate holdings, bought a golden commode and a seaside abode?

But then, that’s not a fair question—not now, when it has two possible answers. Florida’s newest retiree, whose hobbies include golf and setting up shadow U.S. governments, has been revealed to share a number of lifestyle preferences with his greatest political love and—depending on what might or might not have been surreptitiously observed in a Moscow hotel room one winter night in 2013—personal blackmailer. Several revelations are contained in the two-hour video exposé of Vladimir Putin’s secret Black Sea palace released by opposition leader and anti-corruption activist Alexei Navalny, whose arrest has sparked Russia’s largest protests in years, but the greatest revelation is this: Donald Trump not only likes Vladimir Putin—Trump is like him, as Putin is like him. They are alike in one particular way. They both like gilt things.

That’s it. Gilt things. That’s what they like. Well, girls and gilt, but if I had to bet on the question of which they like more, a bet I could place in either Trump’s various bankrupted casinos or in the private casino Putin built for his palace, my money is on the money.

The lighting of candles at Orthodox churches, the foreign invasions throughout the Caucasus region: Putin cares about restoring the traditional Russian empire in much the same way Trump cared about restoring white males to supremacy. Both men may exalt imperialism and racism as examples of the only moral virtue they recognize—domination—but the most important thing for both is that their political ventures pay.

Putin may have gotten away with murdering Chechens and harassing gay people, but it is far from certain he will get away with all that in addition to his secret palace on the Black Sea. For here is another thing it is easy to forget: while some protesters may march for human rights and civil liberties, others will march for their livelihoods. The freedom the latter fight for is strictly economic. It’s a less romantic cause as far as grand political projects go, but their priorities are at least as legitimate as those of the autocrats they fight, their needs more pressing and, as Navalny noted in his remarks to a judge, their numbers far greater.

As the millions of Russians Putin has robbed scream his name as an epithet in the streets of Russia’s major cities, I wonder if it all seems so unfair to him: he may be the richest thief in the world but he’s hardly the only thief in the country. Corruption is endemic in Russia. When the Soviet Union fell, Russian money hunkered down in otherwise empty luxury apartments all over the world—including an alarming number of suites in properties owned by a certain Putin admirer in New York and Florida. Today, as Putin grants permits, licences and other favours to the friends who send their respects in the form of a palace, public officials in law enforcement, health care and education expect thank-you gifts for their services as well.

Like any addiction, like any cancer, like the pursuit of power, corruption is a progressive disease. Left to its own devices, it always gets worse. Navalny notes that every Putin purchase, whether a yacht or a woman, requires more purchases of its own, but corruption is expansive in another sense, too: eventually, the dirty money of one country sullies others. Transparency International notes that golden visa programs can allow criminals and mobsters a place to hide their money; in 2018 and 2019 alone, the United States issued golden green cards to 150 Russian nationals.

Back to those apartments in New York and Florida, then. There is evidence that, over the last few decades, Trump sold some of them to corrupt Russian oligarchs who were looking to hide their money in real estate overseas, and some have speculated that Putin allowed these corrupt transactions with Trump in exchange for Trump keeping tabs on his tenants. Russia, of course, went on to interfere in the 2016 election to Trump’s benefit.

Putin’s corruption may have won Trump political power; it may eventually cost Putin the same, though you have to think he would care more about losing his palace.