Opinion: In Oregon, among Halloween decorations, Julie Keith found a cry for help from a Chinese labour camp. Years later, it's changed how she shops and parents 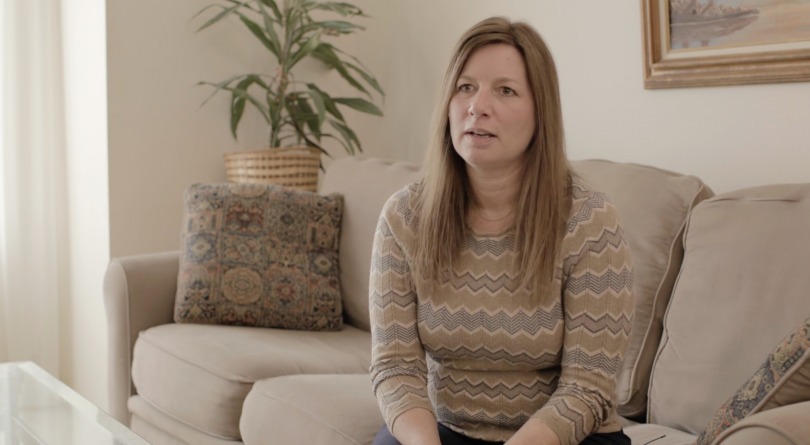 Julie Keith, in a still from 'Letter from Masanjia'. (Leon Lee)

Julie Keith is an executive assistant and mother of two living in Damascus, Oregon.

It was a grey Sunday afternoon in 2011, at my home in Oregon. My daughter was four years old, turning five the following week. For the first time, she was old enough to plan the details of her own birthday party and I couldn’t wait to see her excitement on the day. She was born in late October, and so she decided she wanted a Halloween-themed party.

I had actually found most of the decorations we needed to pull off the party on sale at Kmart the year before, and so they were waiting in storage. So discounted were these accessories that I had enough left over to give her three extra presents to unwrap next week—cheapie things, but still, it was exciting.

I walked up the stairs to the attic—my daughter bouncing up alongside me—to unpack what would be the party’s centrepieces: a 17-piece “Totally Ghoul” branded set of foam tombstones. I opened the big box and started passing her pieces of the convincing-looking “stone.”

Then, from between two tombstones, a folded-up piece of paper fell on the floor. My daughter picked up the note and handed it to me, thinking it was part of the instructions. Neat handwriting in English and Chinese filled the lined, white note paper; one of the edges was ripped. I didn’t know it then, but it would wake me up from my sheltered life and make me realize how much my actions affect people all around the world.

“…If you occasionally buy this product, please kindly resend this letter to the World Human Right Organization,” it read, detailing punishments and abuses of people in a place called Masanjia. “Thousands people here who are under the persecution of the Chinese Communist Party Government will thank and remember you forever.”

The fall air suddenly turned icy. My daughter couldn’t read yet but she could read my face, riven in concern and bewilderment. The letter’s steady tone of voice belied the shocking horrors it described. Tortures? Punishment? Innocent believers, put in prison? Thousands will thank and remember me? Who wrote this note? How did it get into this box of Halloween decorations? In an age of misinformation and wild publicity stunts, I needed to verify this before I believed any of it.

A Google search turned up what I hoped it wouldn’t. Masanjia Labour Camp is known as “a place of nightmares” among Chinese dissidents, and it appeared the note was going easy in its description. I learned that human rights defenders and spiritual believers such as Buddhists and Christians who won’t fall in line with the Chinese Communist Party’s way of thought are sent to these places for “re-education,” a euphemism for brutal torture, sexual abuse and brainwashing until they sign a contract promising they would change their beliefs.

I realized I couldn’t stand by and do nothing. I shared the note on Facebook and with media outlets—prompting exposes and a media firestorm that led to the release of some of China’s prisoners and the eventual abolishment of the Chinese labour camp system in 2013.

Still, I second-guessed my decision afterward. Some people told me that because I publicized the letter, people in Masanjia would be punished, so I should have minded my own business. Had I endangered people halfway around the world, or upset the Chinese government? Maybe. Despite this awakening, I didn’t fully understand the consequences. 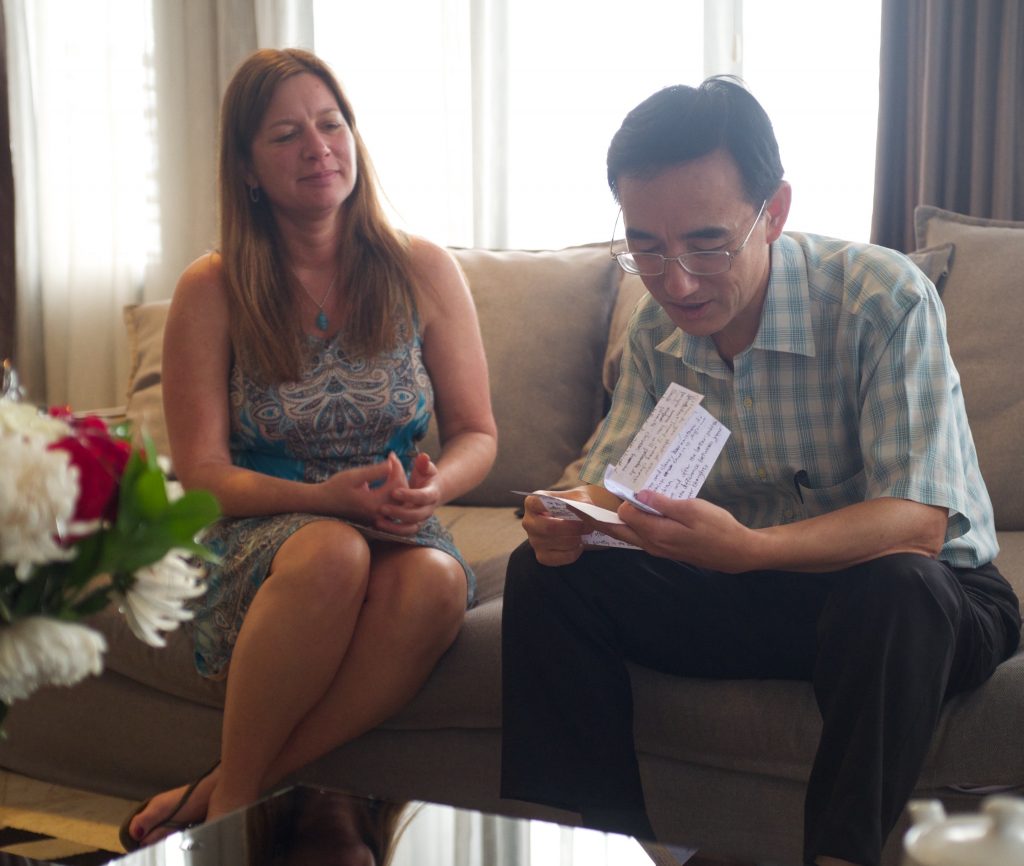 Julie Keith meets Sun Yi for the first time in Indonesia, and shows him the letter he sent. (Leon Lee)

But then, years later, I finally came face to face with Sun Yi, the man who wrote the SOS note and risked his life to slip it into a box to be delivered a world away. Sun Yi is a soft-spoken, kind-hearted person who maintained his composure and quiet strength through horrors that one letter could never encompass. He had been detained for two-and-a-half years for practicing Falun Gong, a meditation practice outlawed by the Chinese government. He refused to give up his beliefs, and he paid the price. He was a one-in-a-million person who changed my life forever.

Today, the thrill I had once gotten from the discounted decorations allowing me to buy more cheap gifts for my daughter couldn’t feel more dissonant—I now know the human cost of that feeling. I explain to my kids that having a lot isn’t important—it’s better to have good things. If the hands that made them were treated well, it’s more likely the item will stand the test of time and bring good memories. We own a little less, but we want for nothing.

Now that Sun Yi’s letter opened my eyes, I feel changed. I am more attuned to humanitarian news near or far and more aware of the world around me. I think about where things are made and if someone suffered to make this decoration, or my shoes. My children, too, have taken a natural interest in all this. At school, my daughter shared the story of the note and my going to meet Sun Yi, helping to open little minds. The influence it has had on them is something I am really proud of. 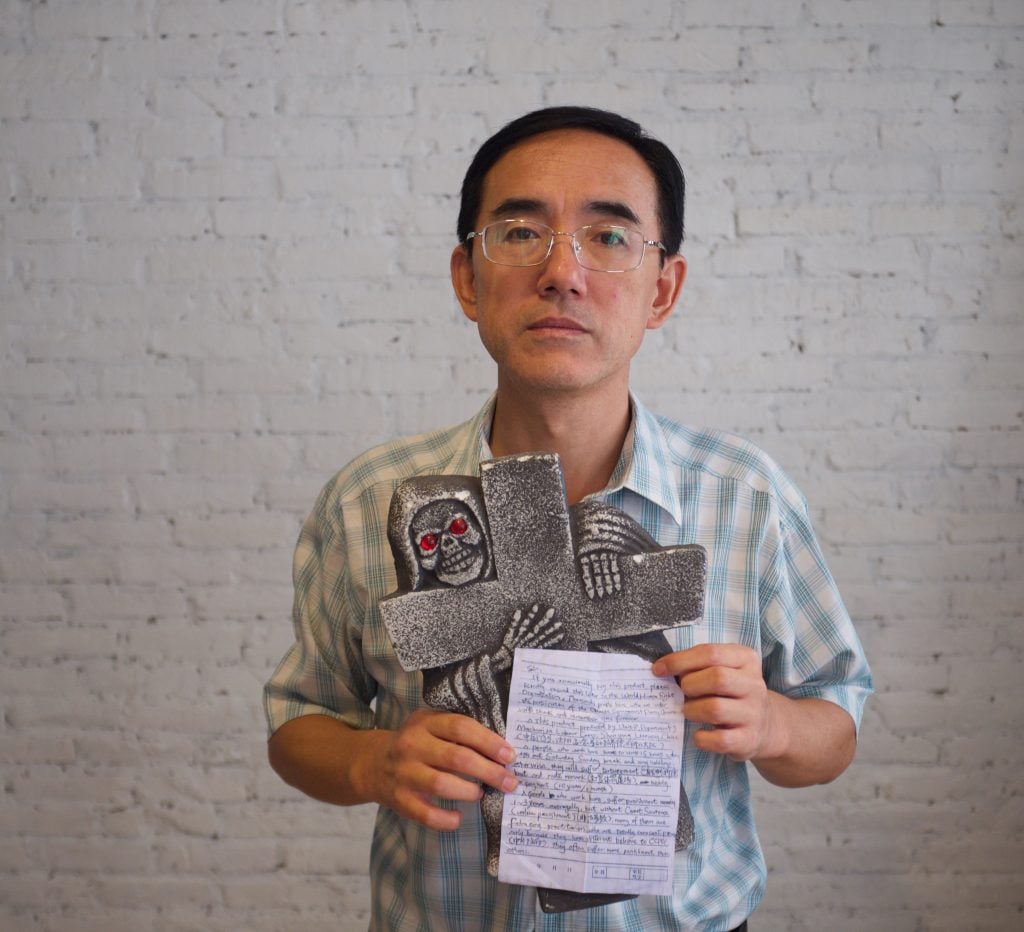 Sun Yi, who wrote the letter that found its way into , holds it in Indonesia during a visit from Julie Keith. (Leon Lee)

I never expected the story to blow up the way it did. Our modern society’s attention span is so short though, so I want to keep this story fresh in people’s mind, which is why I participated in Leon Lee’s documentary and tell my story whenever I can. This is a monumental issue that needs all the help it can get, so I feel it’s my duty to advocate.

Every time I’m shopping, I think about Sun Yi. And I implore the people in my community to forego cheap items and to check where they’re from. Forced labor and persecution are still rampant, and small acts can lead to big change. If I hadn’t reported that letter, thousands of people could have remained locked in Masanjia to this day. It’s time for action that opens people’s eyes to the horrors that were brought into my home in a package from Kmart—and might be in your home, too.

The story of Sun Yi, his letter, and Keith’s visit with him years later, is featured in the documentary Letter from Masanjia, which will make its world premiere at Toronto’s Hot Docs festival on Apr. 27, Apr. 29, and May 4.