I made it out. But the war in Syria is not over.

I'm a Syrian refugee who escaped to safety in Germany. I know I'm lucky. But the horrors in my homeland find themselves in my life, all the same 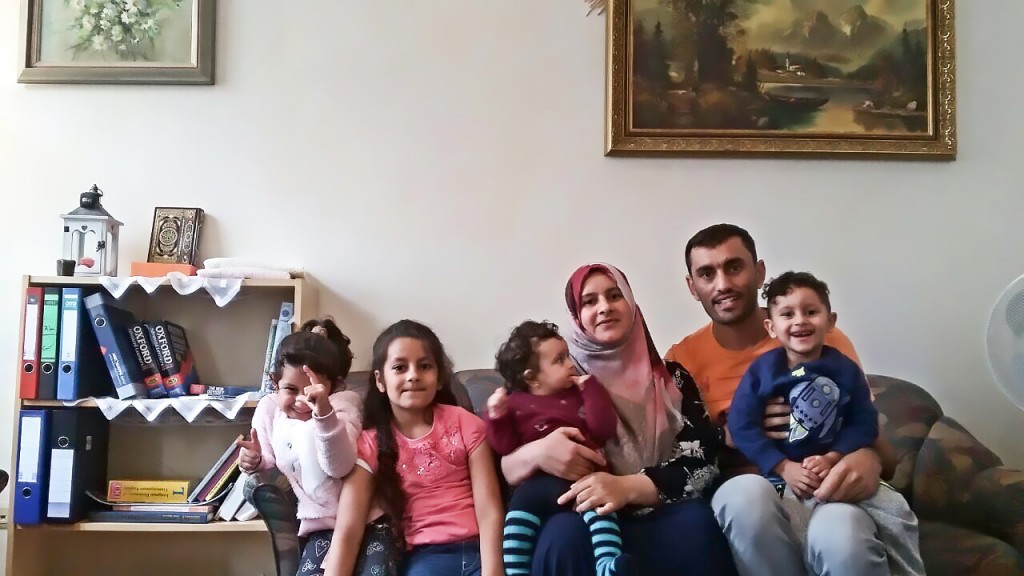 Basheer and Mariam sit with four-year-old Safaa, seven-year-old Lujain, eight-month-old Ibtehal and two-year-old Mohammad in their home in Germany.

Basheer Alzalaan is a Syrian refugee who works in Germany for CARE, a global humanitarian organization providing disaster relief to areas in crisis.

I grew up in a small village in Deir ez-Zor, in northeast Syria. I spent most of my life there. It is the place where I had most of my good memories. It is there that I studied, worked and got married.

Then the militant groups took over. They executed hundreds of members of my al-Sheitat tribe, and I began to fear for the lives of my pregnant wife and my two daughters. Bombs had been dropping on a daily basis. I lost count of how many of my friends and family members died.

I fled to Germany on New Year’s Eve in 2014. I was in constant fear for the lives of my family—there was no medical help, and hardly any running water or electricity. I walked for days; I endured a rocky boat crossing to Greece and passed through the dangerous transit zone in the Balkans.

I am one of more than 5 million Syrians to have fled my home country since the conflict started more than six years ago.

I am also, as friends and family in Syria tell me, one of the lucky ones. I fled Syria at a time when I could still seek safety in Germany. After waiting for months to obtain a visa for my wife and children, they also journeyed on a rocky boat and were lucky enough to make it before the borders were closed.

My friends and family who are still in Syria do not know where to go. In the months after I left, my parents told me about public crucifixions, about hangings, about people who had been pushed into graves and buried alive. As a male in my late-twenties, I feared being forcibly recruited by them, and when I left, many of my friends who decided to stay were killed.

Now, in the village I grew up, hardly anyone is left. A few days ago, I spoke to my friend Mohammed, whom I have known for as long as I can remember. He is still in Deir ez-Zor with his family and his four children. He says that all the neighbours have fled the village and that they can hear the bombing, the airstrikes, the violence approaching. But they have no place to go.

To ask him how he is doing, I say, “How is your field?” For many years now we have only communicated with each other in a secret language. We know that their phones can be tapped at any moment.

In the news, I keep reading that the war in Syria is almost over, and that there is less violence. But the messages and videos I receive from Mohammed and others back home tell me a different story. Air strikes and bombings happen every day now. The only people left in the villages are the ones who have already fled from elsewhere, some of them more than 20 times in the past six years.

Many, like Mohammed, cannot afford to flee. It costs up to 2,000 Euros for a family to make their way from Deir ez-Zor to Hassaka, a safer area. They have to pay smugglers to pass the checkpoints, hide their children in trucks, and bribe different armed groups to pass. After years of war, they can only rely on people like myself outside the country to support them with money to pay for their path to safety.

A few days ago, one of my cousins was captured by a military group, and another one stepped on a land mine when trying to seek safety. Some of my friends have sent me videos of their flight; they camp in desert areas, shovel grave-like holes to sleep in, and cover themselves with blankets and clothes to protect them from the heat and the cold. I don’t know if you have ever been to a desert, but the temperatures are brutal: it reaches up to 40 degrees during the day, and can drop below zero during the nights.

My mother did not want to leave, even when my father finally decided to give up his home a few weeks ago. We all tried to persuade my mother to leave with my Dad. But she stayed, along with my 12-year-old sister. Our village is all she ever knew; our ancestors have lived there for centuries. She herded her sheep and cows, and she did not want to leave them behind. But a few days ago, armed men came to our house. They told her that she does not need to live in a big house like this on her own.

The last message I have from my mother is that she and my sister are now passing the river Euphrates. I have not heard from her in almost a week. I do not know if she is still alive.

So here I sit, in Germany, safe. I have a job with CARE Germany, supporting children and teenage refugees. My family—I now have four children—is safe. I have found friends, and a job that fulfills me. Yet, every other minute, I check my phone to see if there are any WhatsApp notifications. I hear from my family and friends, some of whom have been displaced many times around the country, who have escaped unimaginable horrors, and who are now trapped once again. The war is not over. On the contrary, in Deir ez-Zor and its countryside, the situation is generally worse than ever before.

All I hope for is that international humanitarian law will be abided. I so desperately hope that an immediate ceasefire will save the lives of my friend Mohammed and his family. I hope more than anything that I hear from my mother. I hope that she is alive and that she has made her way out of the war zone. I hope one day I can do more than hope.

This is what it feels like to be lucky.