Opinion: Laws, even if they're ethical, have to be enforceable in a civilized society, and should not divide. Iceland's potential ban fails on both 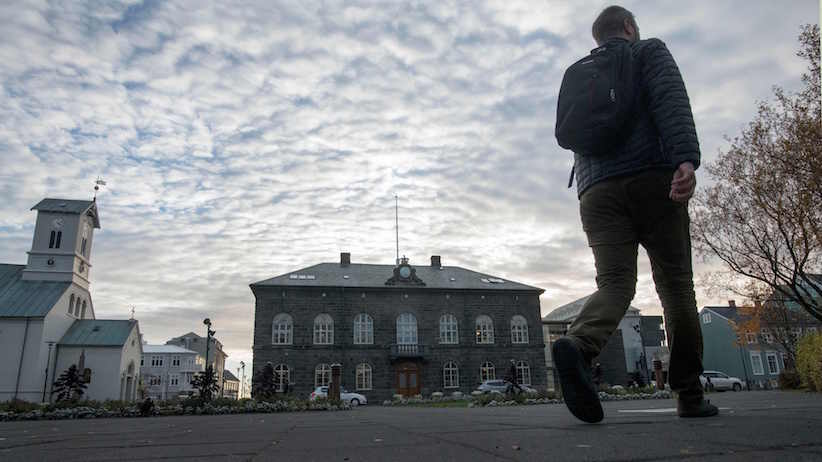 A man walks past the Althingi Parliament building in Reykjavik, Iceland on October 24, 2017. (Halldor Kolbeins/AFP/Getty Images)

For a mostly barren island nation in the middle of the North Atlantic Ocean, Iceland—with a population that’s smaller than that of California’s twelfth most populous city, and a GDP that’s less than every state on the continental U.S.—has an outsize impact in global affairs. On Jan. 1, it became the first country to legislate equal pay for men and women, becoming a model for other countries, including Canada. And when Iceland’s bank system dramatically collapsed in 2008, its policy decisions offered lessons to other countries as they faced their own financial crises.

So when the Icelandic Parliament proposed a bill last week that would penalize a parent with up to six years in prison if they circumcise their baby or infant son for non-medical reasons—in other words, if the procedure is undertaken for religious purposes—people outside of Iceland took note, too.

There is no definitive medical judgment on the benefits or dangers of the procedure. There was a time when the accepted view was that male circumcision was medically beneficial, and while that assumption has somewhat changed, there’s still a strong argument that this cutting of the foreskin helps prevent various sexually transmitted infections (STIs) and lowers the risk of urinary infection. Other medical experts say that if there are benefits, they are minimal, and that there is also a risk of bleeding, swelling, errors and accidents in the procedure.

But to a large extent, the medical debate is irrelevant. This ban is not about what doctors say, but about what people believe their God commanded—and the collision of two kinds of rights.

The proposed ban would mean, in effect, that Jews and Muslims would be forced to break a central command of their theological and cultural teaching, something they have refused to do in their history. In the case of Jews in particular, this ceremony—the Brit Milah—is central to initiation and identity, and its possible prohibition is riddled with memories of past persecutions. MP Silja Dögg Gunnarsdóttir of Iceland’s Progressive Party—part of Iceland’s governing coalition—introduced the bill earlier this year, and told the BBC, “We are talking about children’s rights, not about freedom of belief. Everyone has the right to believe in what they want, but the rights of children come above the right to believe.”

And there we have what the debate is really about: The rights of the child versus freedom of religion. On the one hand is the entirely reasonable desire to protect a powerless baby, a child that obviously cannot give consent, from an unnecessary, intrusive, and potentially harmful event. On the other is the equally understandable desire for people to continue a tradition they consider holy and essential, based not in abuse and cruelty, but in concern and love for their child.

Both arguments are compelling in their own ways. And if Iceland does proceed with the new law, it will empower other activists and politicians elsewhere, many of whom have been arguing for such a restriction for some time. In 2013, the Council of Europe passed a resolution condemning the practice as a “violation of the physical integrity of children,” and the year before, a German judge ruled that circumcision constituted harm against a child. In that case, the boy was four years old, and there were complications after the procedure; the German government later clarified that it remained legal if performed by a trained professional. But the judge’s belief that the child’s right to physical integrity outweighed the desire of his parents to have him circumcised for religious reasons is one that is not uncommon.

The things that make Iceland particularly suited for a test-case ban—a Jewish community of only 250, and perhaps 1,500 Muslims, out of a total population of less than 350,000, which is progressive, acutely aware of human rights, and features in the top ten of the world’s atheist populations despite around half of Icelanders consider themselves in some way religious—also make it a tinderbox for a clash over secularism and human rights. If the law is passed, there is a very good chance that the country’s Jews and Muslims would either disobey it, have the procedure performed abroad, or simply emigrate. The first would lead to arrest and trial, leading to the most wide-ranging international consequences. The second would still, under the proposed law, constitute a crime. The third would likely trouble Iceland’s pride in its liberalism and tolerance.

The European Jewish Congress spoke for most Jewish organizations when it said the ban would “guarantee that no Jewish community will be established” in the country, and that “Iceland would be the only country to ban one of the most central, if not the most central rite in the Jewish tradition in modern times,” constituting an attack on Judaism “in a way that concerns Jews all over the world.” Numerous Muslim leaders have echoed those fears from an Islamic standpoint. Others go further, and have suggested that this is part of some greater campaign of anti-Semitism and Islamophobia. That, however, is simply not so. While some opponents of religious circumcision might display a lack of empathy towards Jewish and Muslim sensibilities, and even a hostility towards religion in general, there are even Jewish people and Muslims among some of the organizations calling for a ban.

Accusations of racism from opponents of the ban, or of child abuse and “organized mutilation” from supporters, are irresponsible, divisive, and do nothing to advance the debate—though then again, neither does this blunt-force ban itself. In practical terms, bans are impractical and unenforceable. Around a third of all men are circumcised, and in the Muslim world that figure is, naturally, far higher. It would be impossible for Canada, the United States, and any European nation to prevent their Jewish and Muslim populations, often numbering millions, to stop circumcising their sons. Laws require majority consent, or at least an implicit acceptance, and must be based on notions of harm and effect. When Iceland made female circumcision illegal in 2005, for example, there was no opposition, and the same has been true for other such bans. Male circumcision—especially because of the differences in medical outcomes, and the social contexts of both—is profoundly different, and it is hard to imagine even this small nation’s tiny Parliament changing that in one legislative sitting.

Perhaps in a perfect world, a faith in God would not require a medical procedure on a baby, and I speak as the circumcised son of a Jewish father. But those perfect worlds aren’t very common, even in clean, friendly, educated Iceland. We are still working out the relationship between religion and state, between majority and minority, and between subtlety and compromise, and the latter matters far more than we might think. I’d like to be spared the knife, but I’m far more frightened of the sword of the irreligious zealot.