Andrew MacDougall: Red Tories look at Scheer and his comments on same-sex marriage and we can’t quite take the measure of the man. He can't afford that. 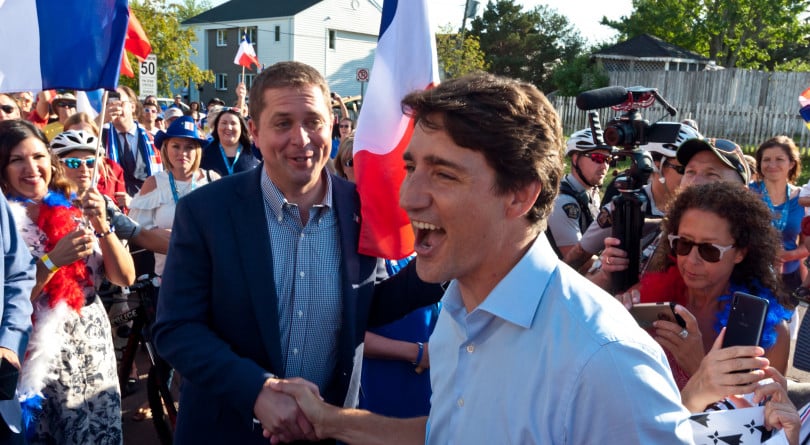 Trudeau shakes hands with Scheer at the World Acadian Congress in Dieppe, N.B., on Aug. 15, 2019 (THE CANADIAN PRESS/Marc Grandmaison)

The Liberal Party is speaking to me.

Or rather, they’re trying to speak to me. About abortion. About gay marriage. About the fact that Andrew Scheer might not be someone a socially liberal, fiscally conservative, foreign policy hawk like me might want to vote for come the October election.

And I’m not listening because I think Justin Trudeau is better, or the answer. When your major policy accomplishment is admitting that Stephen Harper was right on direct support for parents, and then adding a bit to the cheque at the expense of the deficit you promised would be gone, you’re not doing that well, legal weed be damned. And then there’s the repeat law breaking, not something I look for in a Prime Minister.

Not that Jagmeet Singh would be better. The NDP bought their leader at Peak Trudeau and as a result have the only guy less qualified than Trudeau to be PM. As far as I can tell, Singh exists to make Trudeau look good. Don’t believe me? Just ask the droves of long-standing NDP MP’s that aren’t re-offering in 2019 even though Trudeau has let progressives down in a big way. This election should be a Trudeau turkey shoot for the left and the NDP have picked a chap whose only marketable skill is pumping lead in his own feet, as evidenced by last week’s genius of throwing away a post-election bargaining chip by saying he would never support Scheer in a minority scenario.

What about Elizabeth May? Well, full credit for May for putting her policy in the window in advance of an election. Too bad it’s a potpourri of pas puissant. Anyone who begins their political manifesto with the words “at heart, I’m an optimist” is Bambi heading for the buzzsaw called reality. The platform’s lack of reality might be why Jody Wilson-Raybould and Jane Philpott decided to run for re-election as Independents instead of becoming the wind beneath May’s wings following their ejection from Liberal caucus for having the temerity to challenge Trudeau’s shameful behaviour on SNC-Lavalin.

The paucity of plausible progressive alternatives is undoubtedly of comfort to Trudeau, but he’s clearly not resting on his (largely invisible) laurels. Hence the abortion chat. Hence the re-surfacing of Scheer’s speech against gay-marriage in 2005. Forget positive politics for a second; first Trudeau needs to scare everybody back into his tent.

And that includes making a play for people like me.

I’m listening to the Liberals because I look at Andrew Scheer and can’t quite take the measure of the man. Other people I speak with can’t either. Call us Red Tories. Call us whatever. We’re the people who believed it when Harper said the social conservative bits were permanently off the agenda but can’t quite buy the same lines coming out of Scheer’s kisser.

Perhaps it’s because that kisser looks uncomfortable when it’s talking about gays. What you thought about same-sex marriage in 1993 or 1999 or 2005 isn’t as important as what you think about same-sex marriage now. I’m not asking anyone—especially Scheer—to renounce their Christian faith, only to admit that Sodom and Gomorrah didn’t appear on Canadian shores because two dudes or two women were granted the ability to get hitched. A Canadian Prime Minister shouldn’t have difficulty celebrating peoples’ happiness.

I get that none of this is central to most Canadians’ concerns at the moment. I have absolutely no doubt the Tory braintrust have their finger on the pulse with their message about affordability and helping people get ahead. I just wish Scheer could be more at ease telling people he’s not bigoted toward gay people. Because the lack of comfort is giving the Liberals the room they need to keep the conversation on Trudeau’s one strength, and away from his many, many weaknesses. A little candor from Scheer on the topic would go a long way to introducing him to Canadians.

Because rest assured: Trudeau and Team Liberal will keep hammering on doubts about Scheer in the days and weeks ahead. At least until the writs are issued. Once things get started the Liberals could well flip to positivity because they need to excite the country again; a low turnout election would favour the Tories and their more committed base.

If the Tory base were big enough to win a majority on its own the question of how desperate and shameless the Liberals are being with their negative politics would be academic. But it’s not. Scheer needs to rustle up another 7 to 10 per cent of the vote to seize power. Sticking to legalese on gay marriage might not lose Scheer the election, but it might prevent him from forming a government if people like me stay home on election day.