If there's a war on Christmas, it's being led by the most zealous Christians

Opinion: A tempest in a British sausage roll reveals who's really warping Christmas values—those who ignore love for neighbour 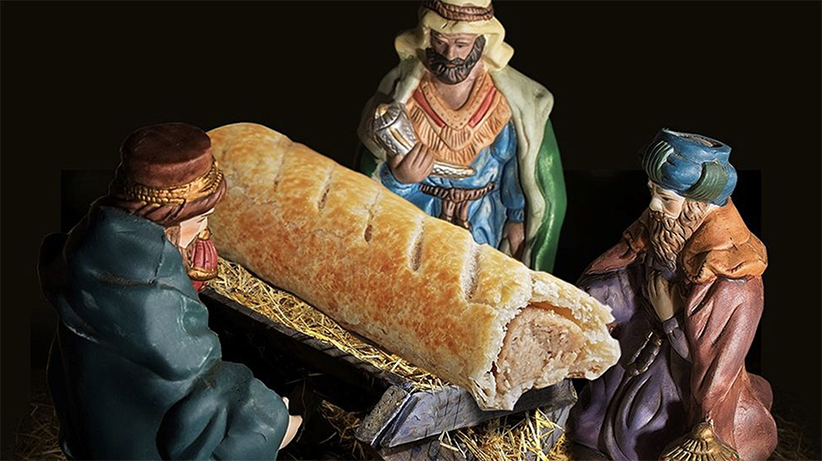 One of the first things Christians are taught in catechism class is that the Son of God is not a sausage roll. It’s part of a deeper theology, of course; other pastry snacks are not specified, but He is never, ever a sausage roll.

I mention this because the British bakery Greggs has just been obliged to apologize after it produced an ad depicting a nativity scene with the assorted worshippers praising not the baby Messiah but the aforementioned sausage roll. It was part of the company’s Advent calendar, entitled—with a splendidly eponymous leap of imagination—”Merry Greggmas.”

Little did the good people at Greggs realize what an uproar this would cause, with the extraordinarily powerful British tabloid press joining forces with various conservative Christians to denounce yet another example of the ongoing “war on Christmas.” But here, reality cries out to be heard: This was merely a slightly insensitive and crass campaign to sell meat products. More than this, there is not and never has been a war on Christmas, whether it’s the appearance of Happy Holidays cards (so what?), multicultural television commercials (surely a good thing), or carol singers allegedly being banned from shopping malls (they aren’t). But the sausage roll reveals a sorry irony. If there is a religious war, it is not on the season we have somewhat arbitrarily and relatively recently chosen as the date of Jesus’s birth. Rather, it is an attack against the Christian, egalitarian virtues that the child and the event are supposed to epitomize—a charge led by some Christians and churches themselves.

Truth be told, some of the loudest and most active Christians tend to be socially conservative and harsh in their opinions of what is new, novel, and challenging, often obsessed with issues such as abortion and homosexuality. The latter is a subject I myself wrestled with for a long time, and I once accepted—albeit somewhat reluctantly—that same-sex marriage was forbidden in Scripture. A deeper reading of the Bible, however, and a less anachronistic grasp of its meaning, led me to question what I had considered self-evident. I also saw firsthand the love and commitment of so many same-sex couples, often Christian same-sex couples, that must lead God to smile with delight.

We must remember, however, that these are not issues that Jesus explicitly mentioned in the Bible. Yes, he did respond to the Pharisees’ question about divorce by noting that marriage was between a man and a woman, but we also read of his dealings with a Roman centurion and a slave whom the said Roman loves—a romantic love, according to some textual readings. St. Paul does mention homosexuality—a word not used as it is today until the 19th-century—but this is more about heterosexual men using boys than loving, adult relationships. And while some of the stories in the New Testament are certainly up for debate, Jesus’s emphasis on refusing to judge others, especially where sexual sin is concerned, is not.

What is expressed repeatedly in the Gospels, however—with a virtual monomania—is love for neighbour. Christ teaches that authentic devotion to God can only by demonstrated by this love, this fraternal romance, and such a love demands social justice, a passion for the poor and marginalized, and a revolutionary understanding of power and morality. If Jesus does condemn anyone, it is the reactionaries, those who have authority, who obscure love under law, and who disguise the kingdom behind formalities and regulations. Instead of opening the doors wide, they close them and bolt them tight.

I have no doubt that those Christians who complain about the ostensible war on Christmas and have such right-wing attitudes about so many subjects still believe in their religion, and I certainly have no right or ability to look into their souls. But it has all reached a crisis point now, particularly for those of us who embrace a more progressive but nevertheless committed belief in Christianity. Quite frankly, the antics of the Christian right also turn people away from Christianity, and understandably so. If that’s what Jesus is about, some people say, I want nothing of it.

Don’t forget that one of the leaders of the battle against this chimerical war on Christmas, and a powerful leader of North American Christianity, is Franklin Graham, the son of Billy. He believes that Islam is “very evil and wicked,” admires Vladimir Putin, and demanded that LGBTQ people be barred from churches because Satan“wants to devour our homes.” He also claimed that the election of Donald Trump was due to the “hand of God” at work. Imagine putting all that on a card for Santa.

What he and his friends seem to consider as Christmas is the stuff of tinselled nostalgia mingled with the self-prescribed absolute right of Christians to dominate the public square and dictate the private conscience. And if anything should anger followers of Jesus at Christmas time, it shouldn’t be some irrelevant commercial for food, but rather the fact that millions of people go without food altogether; it shouldn’t be that Jesus’s name is taken in vain but that His teachings are taken in vain; it shouldn’t be that we don’t say “Merry Christmas” as often as we did, but that we so seldom say “I forgive you,” “You are loved,” and “All are welcome in church.” After all, per the once-ubiquitous question, “What would Jesus do,” the answer would probably be, “tell everyone to grow up, re-read what the New Testament says, and then go and turn the world upside-down”—not just at Christmas, but every day of the year.

And while I still watch Frosty the Snowman every Yuletide and love the Dickensian fantasy of the season, if I forget the authentic, revolutionary, life-transforming meaning of it all, I might as well genuflect to the great sausage roll in the sky.