If you thought the cutting of B.C.’s ancient forests was winding down, you’d be wrong

Our editorial: Over the decade ending in 2018, an average of 15,200 hectares of old growth hit the ground annually in coastal forests alone. That’s an area per year the size of Vancouver. 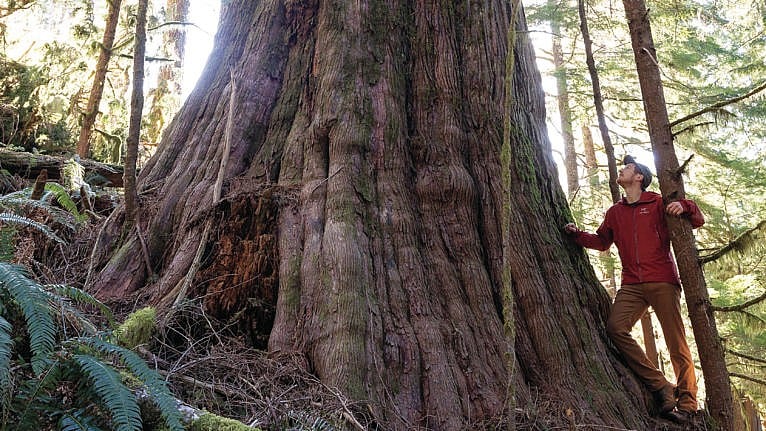 Watt’s ‘before and after’ photos have drawn worldwide attention to old-growth logging in B.C. (TJ Watt)

In the early 1990s, an attention-grabbing poster took the walls of the nation’s university dormitories by storm. It showed an expanse of clearcut forest, with stumps and logging slash strewn across an apocalyptic landscape, beneath a quotation from Shakespeare: “O, pardon me, thou bleeding piece of earth, that I am meek and gentle with these butchers.”

You could laugh at the sophomoric literalism (and the absurd misapplication of Mark Antony’s words in Julius Caesar). But no piece of agitprop so adroitly captured the tenor of the times. Environmental activism was in vogue, and British Columbia’s coastal rainforest was the frontline in an escalating battle. Students, neo-hippies, conservation-minded grandmothers and green-tinged social democrats made common cause, getting arrested by the busload in bids to rescue the 1,000-year-old spruces, cedars and firs of Clayoquot Sound.

RELATED: Inside the battle to save B.C.’s old growth trees

It became known as the “War of the Woods,” and the protesters arguably won, securing commitments to save portions of Clayoquot and other areas, while prompting a wholesale rethink of old-growth logging that led to protected status for much larger tracts.

But if you thought the cutting of B.C.’s ancient forests was winding down, you’d be wrong. Over the decade ending in 2018, an average of 15,200 hectares of old growth hit the ground annually in coastal forests alone, according to provincial statistics compiled by the Sierra Club of B.C. That’s an area per year the size of Vancouver.

The picture is even more stark for forests of the sort we imagine when we hear the phrase “old growth”—groves of majestic giants, creaking in the wind and gaitered with moss. Only three per cent of the province is capable of growing such trees, a recent study found, and has been logged to the point that only 2.7 per cent of that forest is currently old growth.

Yet old-growth logging goes on, and the reasons aren’t hard to discern. Through the aughts and the 2010s, the mill towns of B.C. (and other provinces) took an economic pounding, and for dollars-per-hectare-cut, you can’t beat old growth. John Horgan’s NDP was elected in part on a promise to devise a forestry strategy that puts ecosystem management ahead of supplying timber—rather than vice versa, as B.C. law now stands.

But a changing economic environment is making that harder, not easier. Over the last year, building booms in the U.S., Canada and China have driven lumber prices to record heights. Timber companies and their employees want to make hay while the sun shines, and some of those companies are Indigenous-owned. First Nations are only starting to reap the benefits from logging that non-Indigenous interests enjoyed for well over a century.

So it’s complicated. And where complication appears, political puck ragging invariably follows. The NDP government won plaudits for embracing all 14 recommendations of a strategic review of B.C.’s old-growth management. But as Terry Glavin notes in his revelatory piece in this issue, the law remains unchanged nearly a year after the panel issued its report, while immediate measures to protect old growth were exposed as temporary and far more narrow than the government made them sound.

It will have to act, though, because the lumber market isn’t the only thing changing. Localized blockades like the one Maclean’s recently visited are popping up at sites on Vancouver Island. The tents and posters and bullhorns of the early ’90s have given way to satellite imagery, data analytics and organization through social media. Climate change science has strengthened the activists’ hands, as the coastal rainforest is Canada’s most efficient reservoir of natural carbon storage.

This time, the protesters may not be so far out on a limb. One finding of B.C.’s old-growth panel was a surprising consensus among activists, lumber interests and communities in favour of protecting these ecosystems—on the need for a show of adult resolve. We left the posters on the dorm wall 25 years ago. It’s time to save the trees.

This editorial appears in print in the May 2021 issue of Maclean’s magazine with the headline, “Old growth, new again.” Subscribe to the monthly print magazine here.