If you vote for a reckless politician, you can't claim to be a good person

Opinion: From Donald Trump to Doug Ford, a vote for a politician who deploys a harmful kind of right-wing populism isn't just a civic duty that might have unforeseen consequences 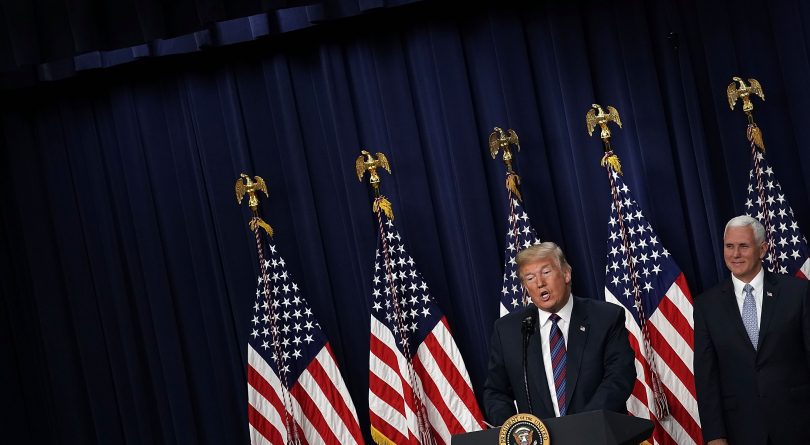 WASHINGTON, DC - MAY 30: U.S. President Donald Trump (L) speaks as Vice President Mike Pence (R) looks on during a bill signing ceremony at the South Court Auditorium of the Eisenhower Executive Building May 30, 2018 in Washington, DC. President Trump has signed S. 204, the 'Right to Try Act' into law. (Photo by Alex Wong/Getty Images)

Earlier this year, while talking to a relative about Donald Trump’s comments regarding “s–thole countries,” I mentioned that Trump’s voters are every bit as responsible as Trump himself for converting the executive office into Coachella for white supremacists. My relative responded that free choices are part and parcel of democracy, and that we should respect people’s voting choices, even if we don’t agree with them. After all, she said, these are mostly good people who generally feel put off by politics.

At the time, I let the matter drop, but I think about that conversation when the Know-Nothing school of the authoritarian right defends its leaders against scandal and ignominy. And with the recent stream of news over the last couple of weeks, it should be safe to say that not only are voters of the populist right driven by their own politics—rather than an alienation from it—they cannot hide behind the assumption they are good people.

Many who throw in their lot with the populist right have serious hang-ups about immigration and multiculturalism, as shown in a study by Jackie Hogan of Bradley University, and Kristin Haltinner of the University of Idaho. Dehumanizing words such as “barbarians” and “parasites” are often used by political and nationalist organizations to describe out-groups, and to circle the wagons in defence of whiteness. These groups have, in recent years, co-opted the right wing and replaced principled conservatism with nationalist and religious theatrics.

Additionally, a recent study conducted by Steven V. Miller of Clemson University and Nicholas T. Davis of Texas A&M University found that white people who would not want immigrant or non-white neighbours were more likely to oppose democracy. Moreover, they were “more open to rule of government by the army,” or by a “strong leader who does not have to bother with parliament and elections.” (The study, by the way, was conducted from 2011 to 2016, before Donald Trump was elected President.) In a follow-up article for NBC News, writer Noah Berlatsky summarized this effect as a tendency of white voters to pull away from democratic institutions, when marginalized people are perceived as benefiting from democracy. “When faced with a choice between bigotry and democracy,” wrote Berlatsky, “too many Americans are embracing the first while abandoning the second.”

The study dovetails with previous evidence to show that white people with racial hang-ups are more supportive of harsh punishments in the criminal justice system, and less supportive of social service programs, when they perceive racialized minorities as the targets of those programs. Prejudice isn’t simply a matter of personal preference, and it doesn’t park itself at the ballot box. Voters who elect populist right-wing politicians—and who know they’ve proposed or support policies that are likely to harm broad swaths of the population—aren’t good people forced into a bad decision by a disdain for politics. Harm against those groups are their politics.

In April, the New York Times reported that U.S. Customs and Border Protection agents have separated more than 700 migrant children from their asylum-seeking parents since October, and taken to shelters run by non-government agencies. Many of them wind up in the facilities indefinitely, and many of them are younger than four years old. And earlier this month, Attorney General Jeff Sessions announced a “zero-tolerance” policy for the crime of crossing the border illegally, which pledged to separate children from their parents if they are apprehended.

While the alleged abuses by Immigrations and Customs Enforcement and U.S. Customs and Border Protection date back to the Obama administration, the response from the Trump administration has been an encouragement for these agencies to escalate punishments in order to deter future migrants. In a recent interview with NPR, White House Chief of Staff John Kelly commented that the migrants in question are “not people that would easily assimilate into the United States, into our modern society,” and that children separated from their parents “will be taken care of—put into foster care or whatever.”

In short, it’s easy to let right-wing populism slide by a simple rejection of élitism—performing a civic duty that occasionally has unforeseen consequences. This is a complete cop-out, and assumes voters have no responsibility to engage with their own humanity. To mark the ballot with that motivation, under the belief that one is fundamentally a “good” person, is to fool oneself. Especially when candidates tout policies during the campaign that will punish and marginalize, and then receive an electoral mandate to act on them. Voters knew who Donald Trump was, before they elected him President. They knew this could happen to innocent migrant children.

Keep that in mind as Ontario’s election day nears. Ontario Progressive Conservative leader Doug Ford has taken to the campaign trail with his everyman attitude and a bullish approach to sensitive issues. This brand of empty populism—rooted more deeply in his feelings than any demonstrable evidence or priced-out policy—has not deeply hurt his election chances among working-class and high-income voters.

In a community meeting in northern Etobicoke, Ford has pledged to bring back the Toronto Anti-Violence Intervention Strategy. TAVIS was a police detachment whose tendencies towards racial profiling (or, if you will, “carding”) and strong-armed tactics were so destructive to community policing that even the Toronto Police Service itself recommended the organization be disbanded. And Ford has plainly stated that he is dead set against safe injection sites for opioid addicts, stating that society can’t “just keep feeding them and feeding them” drugs. This, despite repeated rafts of evidence that safe injections sites help save lives, and no evidence that shutting them down will accomplish the same.

Ford’s disregard for the well-being of some Ontario communities doesn’t end there. He has also thrown in with the Campaign Life Coalition’s opposition to Bill 163, which establishes protest-free zones outside abortion clinics. He has floated the idea of requiring parental consent for teenagers to seek abortions. And in his capacity as Toronto city councillor, he attacked a home for autistic youth as having “ruined the community.”

But according to polls, even with his musings on his record, Doug Ford’s Progressive Conservatives remain a strong contender to form Ontario’s next government. Without a coherent and fully costed platform for voters to examine so they can arrive at an educated decision, the PC campaign has mostly surrendered itself to Ford’s own political and social revanchism. Even the Campaign Life Coalition says that his actions and words should speak for themselves: “There is much on the public record about Ford’s views on Toronto’s controversial gay pride parade…This public record can also be considered an indicator of where Doug stands with respect to the pro-family values that are important to many socially conservative members of the PC party.”

And now, voters appear poised to hand him a blank cheque.

Though I may disagree with many on the right, there are principled ways to practise conservative politics. At the very least, if a politician intends to cut back on social services, spur business by cutting red tape, and address the sticky matters of crime and drug policy, those proposals should have plenty of evidence and a fully costed budget attached. But what has passed for “evidence” lately are the gut feelings of people with low stakes. People whose lives and safety are not placed at risk by reckless policies that result in young men of colour being racially profiled, young women screamed at as they enter abortion clinics, and children ripped out of their mothers arms at the border. People who would generally refer to themselves as “good.”

It hardly matters what a voter’s intentions might have been when they cast a ballot for bullies and panderers who have no moral objections to making life more difficult for the marginalized. Regardless of the intent, if the pain of marginalized communities is less important than jamming a finger in the eye of the so-called elites, that voter has signalled to politicians that inflicting pain is a sound campaign strategy. Our pain, in other words, are their politics.

If this is how they choose to exercise their civic duty, then God save the rest of us from good people.