In 2007, Howard Hampton went on a tirade about long-term care. We all moved on.

Karl Bélanger: The main issue Howard Hampton raised 13 years ago, on a sunny October day just six days before the Ontario election, was that seniors were living in long-term-care homes in soiled diapers. It didn’t resonate much. 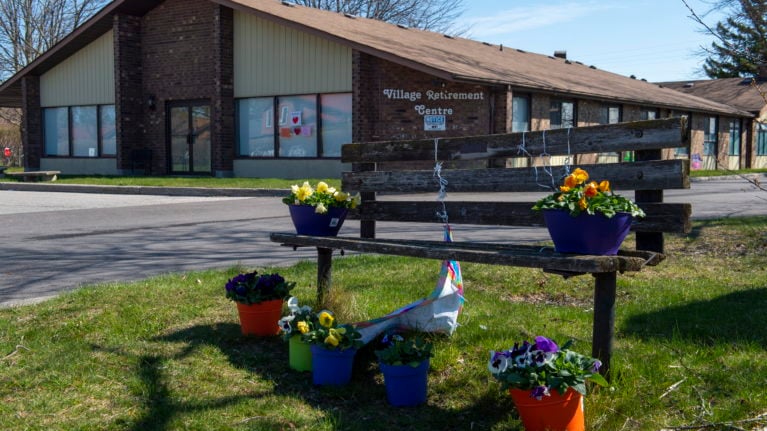 Flowers sit on a bench in front of Orchard Villa care home in Pickering, Ont. on Apr. 27, 2020. Ontario Premier Doug Ford has called in operational support from the Canadian Armed Forces for Orchard Villa and five other long-term care homes in Ontario (Frank Gunn/CP)

Karl Bélanger is the president of Traxxion Strategies, and a former senior advisor for the New Democrat Party.

It was Oct. 4, on a warm, sunny October day in Hamilton. The Ontario NDP caravan had stopped for a campaign event on the shore of Lake Ontario. In the final stretch of the 2007 election campaign, New Democratic Party Leader Howard Hampton was going to make a plea to voters to not give the McGuinty Liberals another majority.

I hopped off the media bus and headed towards the leader’s campaign Ford Escape Hybrid, decaled with the NDP’s orange and green colours, and Hampton’s smiling face. This was the usual last-minute briefing before an event, where I would update him on the issues journalists seemed interested in that day.

Along with senior advisor Jeff Ferrier, we talked about the steel industry, child poverty, the Progressive Conservatives’ “efficiency” plan, and as we did basically every day during that campaign, PC Leader John Tory’s controversial religious-school funding proposal. The Liberal war room had made it the election issue—better than having the election about their record—and the media seemed happy to let the issue dominate the campaign agenda.

Also on our radar that day, a Toronto Star report documenting the atrocious situation of seniors in some of the province’s long–term–care facilities, with horrifying tales of residents being left to wallow for hours—if not days—in diapers filled with urine and feces.

In the Escape, things were uncharacteristically tense. Hampton was clearly upset and frustrated. We were six days away from election day, and it wasn’t clear if the NDP would have party status at Queen’s Park. The Q&A mock-up session was not going well. We would ask questions, and Hampton would mumble the talking points, while constantly repeating, “only six more days.”

I knew we were about to witness something epic from Hampton, even though I wasn’t quite sure how it would all turn out. Before the event began, I picked up my reliable BlackBerry 7230 and alerted all hands to be on deck for the event. “You don’t want to miss this,” I told everyone. Hampton was about to blow up.

MORE: A long-term care disaster that everyone saw coming

I assumed there would be some damage control and spinning required, whatever was going to happen. Hampton went through the motions, delivering his campaign speech and sticking to the NDP’s messages: seniors’ care, child care, health care, and so on. But it wouldn’t last.

Once the question period started, things got heated pretty quickly. Hampton was being asked, once again, about John Tory’s religious schools’ funding initiative. Hampton lashed out at the journalists and he didn’t hold back. What followed was one of the most incredible outbursts; one of the most heartfelt, sincere, off-the-cuff speeches I have ever witnessed on any campaign trail.

“Seniors are living in our homes for the aged, our nursing homes in soiled diapers. All I’ve heard from the media is you want to talk about faith-based schools. There are real issues out there,” Hampton began.

“Don’t you care that there are seniors living in soiled diapers? Don’t you care about that?” he shouted, to the approval of NDP supporters behind him.

“I’m asking you, ‘What do you care about?’ That’s what I know people care about. These are real issues…Seniors who’ve lived all their lives, who built this province, paid their taxes. And now they live in the homes for the aged, in soiled diapers. I think people care!” he continued.

As a professional flak, I cringed. This was dangerously off-message and the media would likely not appreciate being called out on their reporting. As a party activist, I couldn’t help but think, Right on, Howard, good on you! That day, I was very proud to be a New Democrat.

As predicted, many journalists didn’t like Hampton’s tirade one bit. On the tour bus, one of them lashed out at me: “That was bullshit; complete bullshit,” he said angrily.

I replied firmly, but with a smile. “He’s passionate. He cares about the issues. Don’t you care about the issues?” That was the end of it. As expected, the coverage was not kind. Many called Hampton desperate, frustrated and angry. The election happened. Then we all moved on.

The main issue Howard Hampton raised 13 years ago, on that sunny October day, was seniors living in nursing homes in soiled diapers. It didn’t resonate much. Reports about these types of conditions have surfaced here and there over the years, from experts, workers, unions and media outlets. Successive governments ignored the issue, or made it worse, even cutting inspections to the point that only nine out of 626 long-term-care homes in Ontario actually received comprehensive, unannounced resident quality inspections last year.

So here we are today, in the middle of a pandemic, with over 6,900 deaths in Canada, including more than 2,200 in Ontario, most of them residents in long-term-care centres. And it took the army to sound the alarm; to denounce the horrible conditions our seniors are living in and dying in in these residences, for our governments to realize how awful things actually are.

There are reasons for what is happening in these centres and it’s not all because of COVID-19: Chronic underfunding; a patchwork of public and for-profit centres; understaffed facilities with underpaid orderlies, often jumping from one centre to another. There has been much talk about how home care was the next frontier of medicare, but it has remained on the outskirts of government priorities.

Back in 2007, the Ontario NDP was running on a plank to expand home care and guarantee a daily 3.5 hours a day of hands-on nursing and personal care for residents of long-term-care homes. I have no doubt Hampton was quite sincere, but I don’t know if he would have delivered on his commitment, had he been elected premier.

Dalton McGuinty was likely as sincere in the previous election, when he pledged to restore the daily care to 2.25 hours, a regulation cancelled by the Tories in 1996. But he broke that promise. I am also certain that despite the cuts made by his government, Doug Ford was really upset and shocked while reading the military report.

The truth is: they failed, we all failed, and we should all be ashamed.