In defence of veganism

Opinion: An anti-meat protest outside Toronto's Antler restaurant went viral. But not all vegans should be painted with the same militant brush 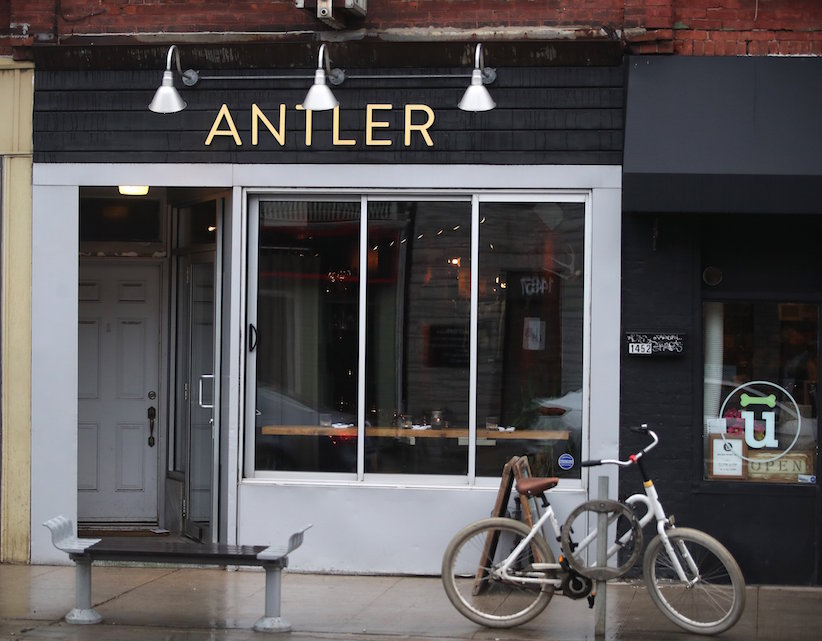 Jessica Scott-Reid is a freelance writer and animal advocate.

It’s been a rough couple of weeks for the growing no-meat movement.

Last month, Michael Hunter—the owner-chef of the Toronto restaurant Antler—faced vegan activists who were protesting outside his establishment by butchering, then eating a deer leg at a windowside table. The story went viral, and provided an instant opening to mock the mounting plant-based rhetoric.

“Cheers for the meat-eating hero who took on ‘privileged’ vegan bullies,” read a Rex Murphy column in the National Post, in which he described vegan activists as “kale-stuffed vigilantes” who are “zombie-eyed” and “mean from hunger and envy.”

Social media also lit up to stake a claim for the importance of eating meat. “Those vegans should know that some animals are meant to be butchered and eaten,” said one Facebook commenter in response to the deer-eating story. “We’ve eaten meat for centuries and some of us are going to keep eating meat,” said another. But along with all the pro-meat talk also came much vegan-bashing. “Something is mentally wrong with these fanatics,” read one comment. “Vegans are very aggressive,” read another.

And: “All you vegans look like the same whacko nut jobs… you look like you are going to shoot up a social media office for not getting your way.”

The news that Nasim Najafi Aghdam, who shot and wounded three people before killing herself at the YouTube headquarters in San Bruno, Calif., turned out to be vegan, only added more fuel to the “See, vegans are crazy” narrative for some—even though trying to kill any sentient being, human or non-human, is about as far from being vegan as one can get.

The subsequent result of all the very public vegan mocking, seems to be a revival of the old, easy-to-discredit stereotype of all vegans as wailing, paint-throwing activists, a stereotype that only impedes group membership and helps give weight back to old, ignorant beliefs that animals don’t have feelings and meat is still necessary for human survival.

But yes, like with any large group, there is always risk for extremism. And holding a giant sign with the word “Murder” scrolled across it, in front of a local restaurant, appears to only feed into that tired “evangelical,” “zealous plant-eaters” stereotype, as Murphy describes. The last thing the movement needs is to provide the meat-loving public with more such fodder.

But while some vegans may be militant, many are not. And believing and portraying all plant-based eaters, ethical vegans, and animal rights activists as angry and fanatical is wrong. As with any large group of humans adhering to the same code of ethics, vegans are diverse, varied in their values, and ever changing, so should not all be painted with the same brush.

Still, I also understand this instinct for militancy. Going vegan can feel like taking a terrifying plunge down a very deep rabbit hole, and it can be traumatizing to learn about the cruelty of the meat, dairy, fur and cosmetics industries. Perhaps it is this trauma, and the subsequent desperation to be a voice for the voiceless and get others to realize the horrors you’ve realized, that pushes some vegans to take things to extremes.

Militant or not, all vegans are living within the minority of what is still a very omnivorous world, and it can feel frustrating, exhausting and heartbreaking. Some try to relieve those feelings through activism, aggressive or peaceful. Some just don’t eat or wear animals. But for most, it is the overall desire to see a world free of animal cruelty and exploitation, free of the number one cause of greenhouse-gas emissions, and free of one of the leading causes of heart disease, diabetes and certain cancers, that makes it all feel worth it, even with the bad PR.

Regardless of how one expresses their beliefs, the movement does seem to be working. The benefits of a plant-based diet have been well-documented, for the animals, for the environment, and for human health. And so, as the movement grows, so does its membership, with a wide range of people denouncing animal products for a wide range of reasons. This is not a mere fragile fad; it is a notable cultural shift with strong moral, scientific and economic roots. Members are not only activists, but also doctors and lawyers, nutritionists and entrepreneurs, and writers.

Seventy per cent of the world’s population is now eating less or no meat, according to leading data and analytics company GlobalData. In Canada, a recent Dalhousie University poll reported that 7.1 per cent of Canadians consider themselves vegetarians, while 2.3 per cent identify as vegans. There’s more and more discourse proclaiming 2018 the year of plant-based foods, showing that millennials are taking veganism mainstream, and turning the act of ordering foie gras into a near social faux pas. And our next national Food Guide is poised to include less meat and dairy recommendations.

The trend toward more plant-based eating is undeniable—and it is very unlikely to be thwarted by a bit of bad press.