Opinion: Doug Ford campaigned on potentially harmful policies—and as they're implemented, it suggests a style of governing that needs a new kind of name 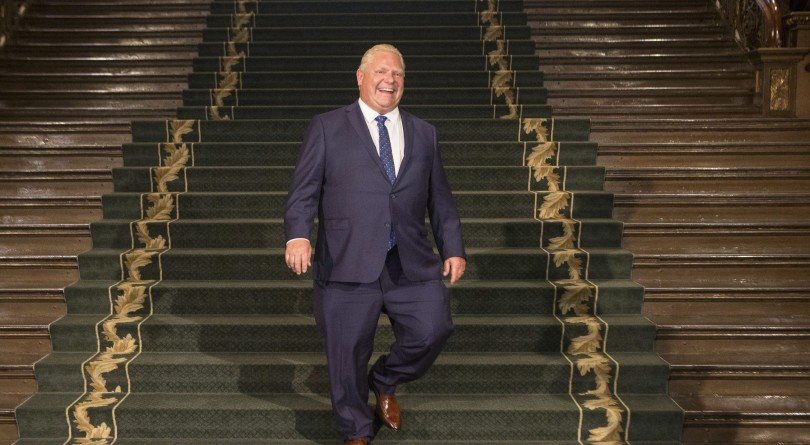 Ontario Premier Doug Ford walks down the grand staircase as he waits for Prime Minister Justin Trudeau at the Ontario Legislature, in Toronto on Thursday, July 5, 2018. THE CANADIAN PRESS/Chris Young

Over the past couple of years, the word “kakistocracy” has gotten plenty of work within the political lexicon. The word, meaning “rule by the worst,” was coined in 1644 during a speech by Paul Gosnold, railing against the Roundheads who aimed to overthrow the British monarch’s rule and replace it with a Parliament composed of common Puritans and cattle-drivers. Three-and-a-half centuries later, it’s experienced a resurgence in the age of Trump, deployed by citizens struggling to describe a government run by people who are, by all appearances, the most venal and least qualified public servants available.

That new wave of empty populist governance is sweeping across other western nations—and we’re starting to see it in Ontario too. It’s been mere weeks since the Ontario PCs were formally sworn in, but Doug Ford’s seeming inability and unwillingness to grasp complex issues, already demonstrated during his tenure at Toronto City Hall, is now becoming rapidly apparent in Queen’s Park.

But that intransigence, of course, was never the selling feature for his broad coalition of voters in suburban and rural Ontario: It has always been his ability to antagonize. Every policy the Ford administration has launched so far—from waylaying a law that would increase oversight of the police to cancelling the Green Ontario Fund—seems designed to appeal to the voter who wanted to piss off the downtown cognoscenti, and break up their champagne socialist policies with a bit of old-school wisdom—to tell it exactly how it is, consequences be damned.

So “kakistocracy” may not be quite the the correct word for it. After all, the premier’s caucus and cabinet include plenty of people with lengthy careers in the public service.

Our new government could be more accurately described as an “echthrocracy”: rule by antagonism.

MORE: How Doug Ford did it

Echthros, the Greek word for a hostile enemy or someone acting with enmity, feels like the right word for this style of governing. We’ve seen it manifest with the surprise announcement that Toronto City Council will be slashed nearly in half, with 47 wards (and thus, council seats) reduced to 25 in order to mirror the existing provincial and federal riding maps. A city of more than 2.7 million people, after a years-long consultative process that would see representation increase, will now wind up with just two more council seats than Ottawa (whose population stands at less than 1 million). Not only will Ford’s former enemies at Toronto City Council find themselves pitted against one another, and not only could downtown core’s numerical influence potentially be gerrymandered almost out of existence, but the deadline to register for a mayoral run was not extended. Thus, John Tory’s seat was almost guaranteed safety while Toronto’s governing body was thrown into chaos.

MORE: Premier to Ford Nation: You voted for this, and eventually we’ll tell you what ‘this’ is

And we’ve seen it with the issue of asylum-seekers in the province. When Justin Trudeau met with Premier Ford for the first time, the Prime Minister had some fairly reproving words about the dialogue he shared with the leader of the country’s most populous province: “It didn’t seem to me that the premier was quite as aware of our international obligations to the UN convention on refugees as he might have been. So I spent a little time explaining how the asylum seeking system works and how our system is supposed to operate.”

A frank admission, but one that should come as no surprise. During the election, the Ontario NDP was repeatedly hammered for its commitment to make Ontario a sanctuary province, offering social services and protection to all Ontarians, regardless of immigration status. This pledge was seized upon by far-right commentators (as well as the influential Facebook group “Ontario Proud,” run by a former Conservative staffer) to not only suggest that an NDP government would put Ontarians at risk, but to suggest that asylum-seekers crossing the border in Québec were “illegal” and “jumping the queue.”

This is, of course, an outright lie. While it is illegal to cross the border outside of official ports of entry, there is no “queue” being jumped by asylum-seekers who do so; they are simply added to the queue of people in this country seeking asylum. According to our own laws, as well as the 1951 UN Convention Relating to the Status of Refugees (of which Canada is a signatory), the means by which asylum-seekers cross our border is not a material factor in their claim. While the federal government does detain them after they cross, asylum-seekers are questioned, subjected to a background check, and then turned over to the care of the Canadian Border Services Agency to have their claims processed.

MORE: Are you ready for Premier Doug Ford?

In other words, there is no such thing as an “illegal” asylum-seeker, and no such thing as a “queue-jumper.”These are fabricated terms, driven by xenophobic politics, that have found their way into the mouths of our elected representatives.

Now, Lisa MacLeod—the minister in charge of the now-combined children, community and social services portfolio—announced that Ontario would be pulling out of its agreement with the federal government to provide funds for refugee settlement and training. According to MacLeod, the influx of asylum-seekers across unofficial ports of entry has strained social services in Ontario to the breaking point. How many asylum-seekers are we talking? Tens of thousands? Hundreds of thousands?

Not quite. By the minister’s count, 5,500 over the past year. If 5,500 more people moved into midtown Toronto, neighbourhood traffic would barely slow down. But somehow, an influx of 5,500 asylum-seekers over the course of a year has swelled Ontario, a geographically massive province that could capably handle three times its population, past its capacity. That patently ridiculous notion hasn’t stopped MacLeod from using inflammatory, misleading, and awfully familiar language to describe people fleeing violence and persecution: “There is a process…that is not being followed by some,” she said. “There are legal ports of entry for those seeking asylum against persecution. We will always welcome people who follow that process. Illegal border-crossers are not following these rules, and the federal government is not enforcing them.”

Ford’s press secretary Simon Jefferies blew the dog’s whistle no less forcefully in his comment reported by the Toronto Star: “The federal government encouraged illegal border-crossers to come into our country, and the federal government continues to usher people across the U.S.-Quebec border into Ontario. This has resulted in a housing crisis, and threats to the services that Ontario families depend on.”

Which leads us to another early signal of this echthrocracy: this cowflop argument over housing. In Toronto, for example, the housing crisis has been 20 years in the making ever since the provincial government ended cost-sharing for the building and maintenance of social housing in the mid-90s. Between 1996 and 2006, only 5 per cent of housing units were rent-purposed, and the rental market has only recently seen any hope of growth at all.

All this information is publicly available; the Ford administration is privy to all of these facts about asylum-seeking, social services, and the housing crisis. In fact, after a botched sell-off of Toronto Community Housing units in 2012, the Fords voted in 2014 against a completely symbolic measure for Toronto City Hall to request funding for affordable housing. When the late mayor Rob Ford was asked why he voted against it, Ford’s answer was “Why am I gonna go to the federal government, aggravate ’em, and the provincial government and aggravate ’em, when you know that they’re…not gonna give us the money?”

The Ford administration knows these facts. The problem is, they don’t care. Because this rhetoric, designed for maximum cruelty towards asylum-seekers and the rankling of latté-sipping liberals, won a majority mandate in Ontario.

RELATED: Doug Ford and the art of the political flip-flop

The image of migrants threatening to disrupt our social fabric is not a new one. It’s the same image that Donald Trump attempted to dredge up with his “animals” comment, his characterization of the United States as a “migrant camp,” and in his subsequent tweets about undocumented immigrants “infesting” the country. We’ve seen this language applied throughout history to describe the Roma, Tutsis, and Jewish people, among others.

But this is what Ford’s voters wanted: to pour their out-group apathy into a rumpled suit and slap a badge of authority on it. And as we’ve seen over the past week, that antagonism towards the province’s most vulnerable has consequences, when the Premier and his subordinates can whip up lies and hatred against people seeking asylum in this country. And none of this language or these policies has a scintilla of evidence behind it. It’s simply there to trigger the people with which the reactionary far-right has had an ax to grind ever since the Mike Harris-era PCs were booted out of office.

Under Doug Ford, the PC government calls itself “government for the people.” Over the next four years, it seems the echthrocrats in Queen’s Park intend to make it very clear to the rest of us who even counts as “people” at all.

CORRECTION: A previous version of this post suggested that Ford was “scrapping oversight of the SIU.” The Ontario PC government is delaying the implementation of the Special Investigations Unit Act, which gives the police oversight body additional powers.