In the Ontario election, there's a lot of change that's hard to believe in

Opinion: The PCs' Doug Ford and the NDP's Andrea Horwath failed to distinguish themselves at the campaign's last debate, as Ontarians seek a decent Liberal alternative 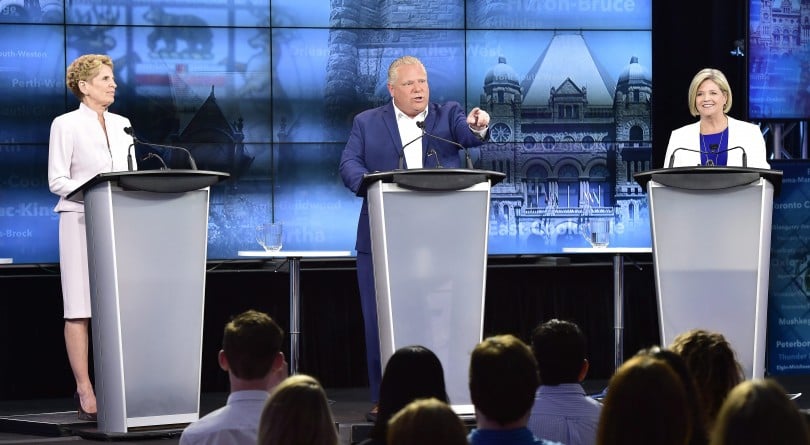 A government that’s long in the tooth doesn’t require much of a push to begin its irreversible journey out the door; just ask Kathleen Wynne. The desire for change, after all, has gotten many an opposition party elected.

But where things get interesting is when there are two credible choices for a replacement. Well, make that two realistic choices. Or rather, two choices, anyway. Welcome to the hell that is Ontario’s election.

Change voters who tuned into the last leaders’ debate hoping for an “aha” moment to guide their pencils probably left disappointed—discouraged, even—at the prospects before them. There is no Justin Trudeau mounted on a shiny white horse. There is only the Liberals-on-steroids NDP, or the beer-centric PC everyman who’s not overly interested with the particulars of his own offer.

That a politician of Kathleen Wynne’s skill can’t see off this crowd tells you how stupendously fed up the province is with Liberal rule. Indeed, only a spent Liberal movement would think the best defence to big spending, serial scandal, and bonkers hydro prices would be to launch a #SorryNotSorry campaign on social media. Someone needs to teach the short-pants crowd running the Grit war room that brevity is the soul of wit. Why use three words when only the first or third would do?

It’s actually the NDP’s Andrea Horwath who is running a #SorryNotSorry campaign of her own, taking most of Wynne’s worst mistakes and vowing to double or triple down on them. The truth is, as long as the leader is sane, nobody is really afraid of crazy lefty candidates—they’re par for the course—and the NDP being in at least a close second place bears that out. Indeed, a strong majority of people like Horwath, according to recent polling. But throw in a Hitler meme here and some 9/11 truthing there on the part of her roster of rookie candidates, and it makes for a hell of a party—just not one that should be governing Canada’s largest provincial economy.

With two lefter-wing options vying to keep Ontarians indebted until the (supply-managed) cows come home, the timing could not have been more correct for a principled centre-right message on taxes and spending. But after swinging and missing with centre-right candidates in their 2007, 2011, and 2014 quests to topple the Liberals, the Ontario PCs chose this time to handicap themselves by first losing their leader, the priapistic Patrick Brown, to scandal scant months before the election, and then replacing him with the human wildcard that is Doug Ford. Take that, you wine-swilling, news-reading, hoity-toity, downtown metropolitan elite-y people!

The idea of a “common-sense” conservative lording over bien-pensant Toronto excites hardcore Conservatives to no end. That Rob Ford, who no one ever mistook for an elite, won the Toronto mayoralty in 2010 was interpreted as such a referendum on the merits of homespun populism. But what no one has grasped, even with their failed cameo in the dying days of the 2015 federal election, is that all Ford appeal is local, and heavily discounted since the days of crack. Populism might well sell, but it doesn’t mean Doug Ford works as a seller.

Which isn’t to say Ford doesn’t have a plan. If you like going to beer pumps, but dread heading to their gas equivalent, you like Doug, with his pledge to expand beer and wine sales and gut gas taxes. But it all feels a bit…white, doesn’t it? Like an appeal to an Ontario that doesn’t really exist anymore. I’m not saying that Rahul or Zeena or Rodrigo don’t like cracking open a cold one, but it’s probably a ways down on their hierarchy of needs. Where is the more aspirational pitch to those looking save a little more as they make their way up the ladder? Where is the common-sense conservatism that knows you can’t spend more than you earn?

Stephen Harper’s populist GST cut may have pissed off the experts, but at least it applied to everyone, not only those who drive long distances or guzzle vast amounts of booze. Ford’s talk on childcare grasps this broad dynamic, but it feels like the exception, not the rule. Too often, it feels like Ford lacks seriousness. Harper might not have specified where his cuts would come in his 2011 majority win, but he didn’t promise, as Ford has now done, that not a single government job would be lost in his quest to do it. People get that governments are full of waste, but they’re not stupid either.

The PC bet is that no one cares about the spending specifics and that the Ford pitch is just broad enough to motivate their target voter coalition. And there are certainly enough big brains and seasoned pros in the Ford campaign who know how to win elections. But from the outside, it feels like the PCs have eschewed a Highway 407-wide route to change on which any leader not named Wynne could have driven to victory, in favour of a craggy cliff-top route and an unreliable guide.

With ten days to go, and with voters now taking a harder look at the NDP thanks to their rise in the polls, the battle is now on to present the most credible face for change. After a surprising first few weeks of campaigning, Horwath and Ford now face one last sprint to boost their credibility with voters in a province that is desperate for change—but who might be more interested in changing the faces of the alternatives than in anything they’re offering.