Indigenous rights are not conditional on public opinion

Opinion: A poll finds that most Canadians believe we apologize too much for residential schools. But it doesn't matter if Indigenous rights are unpopular—what matters is we change 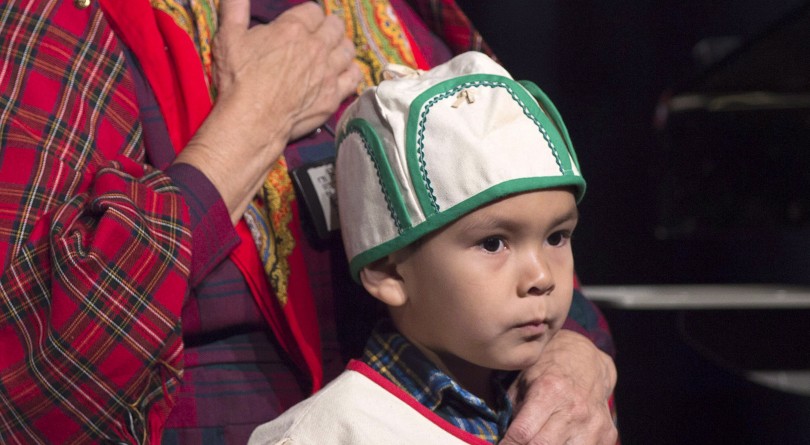 Kanikuen Penashue, 5, from nearby Sheshatshiu, participates in prayers with elders before Prime Minister Justin Trudeau delivered an apology on behalf of the Government of Canada to former students of the Newfoundland and Labrador Residential Schools in Happy Valley-Goose Bay, N.L. on Friday, Nov. 24, 2017. (Andrew Vaughan/CP)

In 2017, Abacus Data, in partnership with Equal Voice, released the findings of their nationwide survey about Canadians’ views on women in politics. The majority of those surveyed—58 per cent—believed that there are just the right number or too many women in politics—this, despite the fact that women hold only 25 per cent of the seats in the House of Commons, and in provinces like New Brunswick, women make up as little as 16 per cent of the seats.

It’s a galling dissonance, but the premise of the question also feels frankly immaterial to how change is made. How relevant is it that Canadians think this dismal representation of women in government is either enough or too much female representation, when laws and policies in Canada specifically advocate for gender equality and protect against gender discrimination? How much should public opinion matter about whether Canadians agree with gender equality, when it is in fact the law? After all, if women had to wait for all men in Canada to agree with or like women’s equality, we might still be waiting. Women had to agitate for change. It’s never convenient to the comfortable, and discomfort polls poorly—but it’s the only way it happens.

The same thing might also be said about public opinion on Indigenous rights in Canada. The most recent Angus Reid public opinion survey, which polled 2,500 Canadians about their views on Indigenous peoples generally, and Indigenous public policy specifically, exposes a deep divide in opinion. A slight majority (53 per cent) feels that Canada spends too much time apologizing for residential schools and another 53 per cent think Indigenous peoples should integrate into Canadian society and have no special status—even if that means losing Indigenous cultures and traditions. Yet these are the very same attitudes held by former prime ministers and administrators of Indian Affairs that led to assimilatory policies like residential schools.

Therein lies the stark contradiction: Canadians feel we apologize for residential schools too much, and yet exhibit the same racist attitudes for which the apology was made.

Former Prime Minister Stephen Harper made a formal apology in the House of Commons on behalf of all Canadians on June 11, 2008 for the harms done in residential schools. It said, in part: “Two primary objectives of the residential schools system were to remove and isolate children from the influence of their homes, families, traditions and cultures, and to assimilate them into the dominant culture.  These objectives were based on the assumption Aboriginal cultures and spiritual beliefs were inferior and unequal. Indeed, some sought, as it was infamously said, ‘to kill the Indian in the child.’  Today, we recognize that this policy of assimilation was wrong, has caused great harm, and has no place in our country.”

In other words, the idea that Indigenous peoples should abandon their own cultures and assimilate into Canadian culture is an idea that “has no place in our country.” Yet, a decade after the apology, half of the Canadians polled still hold these racist views. This is not surprising when many political leaders and media commentators have espoused similar racist views or denied racism exists altogether. Even Angus Reid himself seems to have difficulty accepting the racist undertones of his poll’s findings; he says he does not consider the Canadians who hold these ideas to be “racist,” but instead “hardliners” who don’t think more money is the answer to growing poverty in First Nations. It’s a surprising conclusion given the over-abundance of research and data that shows just the opposite.

In addition to the crippling economic legacy left behind by the colonization of Indigenous lands and resources, broken treaties, and rigid federal control over reserves, Canada’s gross underfunding of First Nation social programs is in fact the major contributor to First Nation poverty today. One need only read any of the auditor general’s reports to show that Canada has been underfunding essential social services like education and housing for decades. Dr. Cindy Blackstock, the head of the First Nation Child and Family Caring Society, won her discrimination case against Canada at the Canadian Human Rights Tribunal, which found that Canada’s purposeful and chronic underfunding of child and family services in First Nations was racial discrimination and a direct cause of the over-representation of First Nations children in foster care. This underfunding across all social programs is so comprehensive and so severe, that even if the racially discriminatory funding stopped this year, it would take decades to close the socio-economic gap. This isn’t a matter of public opinion—it’s a fact.

While many Canadians may feel that they are reminded too often about what happened in residential schools, it seems that in fact, they are not reminded enough. The Truth and Reconciliation Commission’s final report concluded that Canada was guilty of genocide—not just cultural genocide, but physical and biological genocide as well. Canadians should never forget what their country did to Indigenous peoples. Scalping bounties, smallpox blankets, forced sterilizations, and starvation policies were all part of Canada’s genocidal policies towards Indigenous peoples that, in addition to residential schools, have a lasting legacy in First Nations.

Real reconciliation is also about truth and justice. The truth requires never forgetting the rapes, tortures and deaths of thousands of children in residential school, and justice requires putting an end to the racist attitudes that allow these human rights abuses—in the form of foster care—to continue today. The same is true about historic and contemporary violence against Indigenous women and girls.

It’s long past time that pollsters stop asking Canadians if they like Indigenous peoples or agree with our rights—and start asking them whether they feel like they’ve put Canada’s apology into action.