Is 2018 the year that democracy reaches its tipping point?

Liberal democracy isn't the only game in town. And 2018 may usher in more decay of our preferred political system. 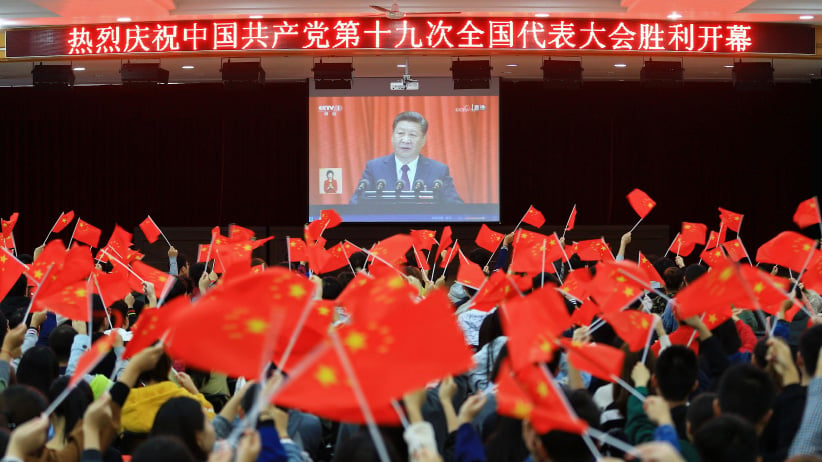 College students wave national flags as they watch the opening of the 19th Communist Party Congress in Huaibei in China’s eastern Anhui province on October 18, 2017. President Xi Jinping declared China is entering a “new era” of challenges and opportunities on October 18, as he opened a Communist Party congress expected to enhance his already formidable power. (AFP/Getty Images)

If you’re looking for proof that democracy is the historical exception to how humans live together and not the rule, look at the last few thousand years or so of our history. Start with Ancient Athens, circa 508 BCE: the historical and geographic locus at which we situate the “birth” of government by the people. Political mismanagement, war, revolution, and counter-revolution led to decline in democracy’s flagship city-state. Then in 322 BCE—not two centuries after a series of remarkable reforms established Athenian democracy—it was over.

After Athens came the semi-democratic Roman Republic. It fell to empire. Later, democracy slowly emerged in England. Later still, revolutions in the 18th and 19th centuries lurched towards democracy and stumbled back, except for in America, with its constrained self-rule remained. Then, slowly, democratic states began to emerge and stick around as workable models and changing norms took hold, driven by populations who wanted better, and backed by countries who had successfully managed the transition to democracy. Recently, fascism and communism challenged those states, and in 1941 there were only 11 democracies left in the world. More recently came a rebound, as decolonization movements picked up steam after the Second World War, and as populations agitated, mostly non-violently, for freedom. In the latter half of the 20th century, the spread of democracy extended membership in the community of the self-governed to billions worldwide.

But while you can find scholars, commentators, and politicians who swear that past democratization means that the species steadily progresses at a slightly upward trajectory, ever inclining towards perfection, we know that popular self-rule has crumbled into dust in our hands before. Now, 2018 threatens to be the year it happens to us once against as trust continues to decline throughout the democratic world, white supremacists, fascists, and fascist-sympathizers rise, and populist authoritarians exploit sempiternal hatred and widespread dissatisfaction in their pursuit of power. In 2015, political sociologist Larry Diamond argued that we were in a “democratic recession,” and had been for some time—then things got worse, nudged downward by economic catastrophe, rising inequality, and a failure of global leadership by the world’s top democracies. Today, despite the gains of the last century, we are in an era of arrested democratic development and institutional decay, perched on the tip of decline as anti-democratic forces continue to gather.

READ: Democracy can’t be taken for granted. Charlottesville proves that.

In the fall, Pew Research Center released a global survey on political systems. Their results not only capture a sense of distrust—just 51 per cent of Americans trust the government “to do what is right for the United States”—they also pick up on related dissatisfaction with democracy; only 46 per cent of those who live in a democracy are “satisfied with the way democracy is working.” The numbers are somewhat encouraging in Canada (67 per cent and 70 per cent, respectively), but in the 38 countries surveyed, support for “rule by experts” is 49 per cent. “Rule by a strong leader” (without legal or legislative checks) came in at 26 per cent (55 per cent in India, the world’s most populous democracy). “Rule by the military” managed 24 per cent. Digging into the data, commitment to representative democracy appears fragile, with over 40 per cent of respondents falling into the “Less committed democrats” camp in Canada, the United States, Germany, Italy, the United Kingdom, France, Australia, and in several other countries from whom we expect better. There’s too much snow gathering on our democratic roof, and its weight in 2018 threatens to collapse it onto our heads.

Way back in 2016, Freedom House—which has been keeping an eye on governments since 1941—rated 87 of the 195 countries it assessed “Free.” That might seem encouraging, but in its corresponding annual report, Freedom in the World 2017, the watchdog found that 67 countries “suffered net declines in political rights and civil liberties,” and that 2016 was the 11th consecutive year in which global freedom declined. Half the world remains “Not Free.” Adding technocracy (for instance, the European Union), the rise of digitally enabled threats to democracy (hacking, fake news, trolling, and so on), and the pervasive influence of lobbyists and moneyed interests on policy and law, the democratic vista has become rather cloudy.

There are, after all, alternatives to democracy. You might not prefer them, but they exist. Billions live under them in China, Russia, Iran, Saudi Arabia, Venezuela, and elsewhere. China has been of some concern for years, functioning as an alternative political model—and in many cases delivering the goods better than democracies can, though at considerable cost to human rights. To think that democracy—especially liberal democracy—is the only game in town is folly. To think that popular self-government is programmed irreversibly into our being is even stupider. I’m sure many Ancient Athenians and Romans believed they had conquered political self-organization, that their triumphs had reached the end of history. Not long after, history saw their systems collapse.

READ: Why Canada needs to push for change wherever democracy is at risk

Democracy doesn’t just crumble on its own. We, the people, are supposed to be its caretakers, just as we are its beneficiaries. We aren’t blameless in its decay, especially the many of us who believe the collapse of democracy is impossible once it has been established. Yet as we face unprecedented global challenges and threats—climate change, nuclear proliferation, and pandemics among them—and as the battle becomes harder to fight, it isn’t clear that enough us are prepared to stand up for self-government, to struggle and sacrifice for our own good as the question of how we will live together is raised and decided. We are left to ask what 2018 will bring: a push back for robust democracy, yet another year of decline, or the tipping point for autocracy—or worse.