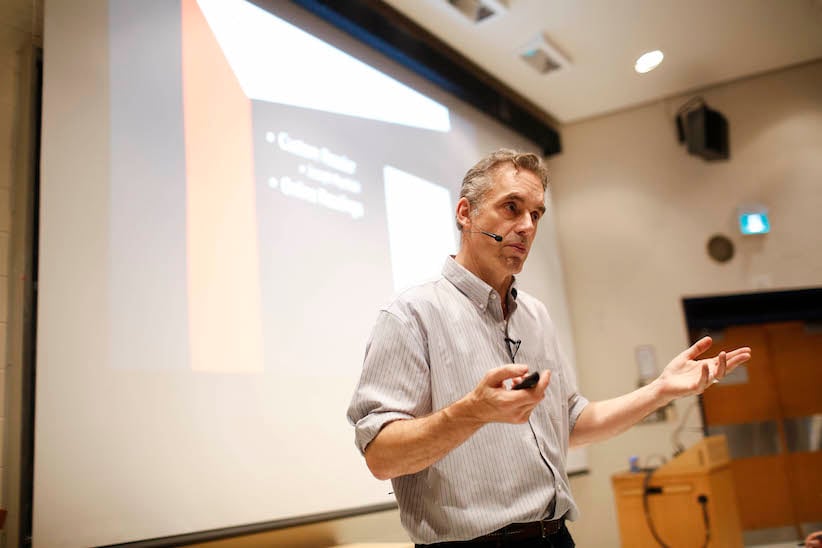 Jordan Peterson during his lecture at University of Toronto. (Rene Johnston/Toronto Star via Getty Images)

University of Toronto psychology professor Jordan Peterson was in the news this week—and one imagines this makes the university sad. Peterson first made the news and became a belle of the alt-right when, in September 2016, he announced that he would not use a student’s preferred pronoun if he were asked to, except that he might if he felt the request was “genuine,” and no one had asked him that anyway.

What that poor man has been through.

Needless to say, in an economy as desperately short of leadership and ideas as the alt-right’s is, Peterson’s stock went through the roof. He currently has legions of fans hanging on his every YouTubed word; he’s now hauling in around USD $50,000 a month through crowdfunding.

As a child, I was always a bit uncomfortable when my parents’ friends asked me to call them “Auntie.” I was pretty sure there was no peer-reviewed literature supporting this familial relationship, but it never occurred to me to attempt to politicize, let alone monetize, my unease. I certainly never accused “Auntie June” of trying to undermine Western civilization in the service of a post-modern neo-Marxist agenda every time she brought over a casserole. I wouldn’t have gotten any pudding.

To be clear, Jordan Peterson is not a neo-Nazi, but there’s a reason he’s as popular as he is on the alt-right. You’ll never hear him use the phrase “We must secure a future for our white children”; what you will hear him say is that, while there does appear to be a causal relationship between empowering women and economic growth, we have to consider whether this is good for society, “‘’cause the birth rate is plummeting.” He doesn’t call for a “white ethnostate,” but he does retweet Daily Caller articles with opening lines like: “Yet again an American city is being torn apart by black rioters.” He has dedicated two-and-a-half-hour-long YouTube videos to “identity politics and the Marxist lie of white privilege.”

Now, as I’ve said, I failed to get in on the ground floor of the “not using a person’s chosen address” industry which, in a simpler time, was known as “calling people names” and was considered bad manners. But since calling a certain University of Toronto professor “Jordan Pea-Headerson” is apparently the only thing standing between us and non-stop collectivist potato farming, I’ll do my part for the resistance.

Western civilization is, after all, a delicate thing. Today you agree to call Edda van Heemstra Hepburn-Ruston “Audrey Hepburn,” tomorrow we’re all fighting over water and gasoline in a post-apocalyptic hellscape. Even worse, some social justice warlord will ask you to call him “Immortan Joe,” and that’s not your real name, Joseph.

As far as I can tell, Jordie—and not the cool “Geordi” from Star Trek either— rewards the devotion of his Patreon patsies with regular rants against “political correctness,” and relationship advice I can only call “Angry Oprah Says.” For USD $29.99, Petersonites can get access to the Self Authoring Suite (a USD $119.92 value!). Those looking for further opportunities to give him money can pay USD $9.99 for “100 question phrases” which “can be found, along with similar question sets, elsewhere on the web” so that they might learn how your personality compares to 10,000 others.

Pro tip: just take a personality test from the back of an issue of Glamour; you’ll only be out about five bucks, and you might find a free perfume sample.

He also gives book recommendations apparently drawn from a high-school English-class reading list. If somehow you missed them, Mistress Peterson is the portal to such obscure works as Animal Farm, Of Mice and Men, and that cornerstone of the Western canon, Flowers for Algernon.

There is no polite way to put this, but since Peterson claims that “If you worry about hurting people’s feelings and disturbing the social structure, you’re not going to put your ideas forward,” I’m just going to say it: Spend half an hour on his website, sit through a few of his interminable videos, and you realize that what he has going for him, the niche he has found—he never seems to say “know” where he could instead say “cognizant of”—is that Jordan Peterson is the stupid man’s smart person.

Peterson’s videos go on and on. It’s like opening up a tab for one of those bird’s nest webcams at the height of its popularity: Lots of people are watching, you feel like you should too, but nothing is happening. You keep checking back, the viewer numbers have risen, but the scene is just so grey and drab. You can make out a white object on your screen that may or may not be cracking up, but as time goes on you start to think, “This thing was not incubated properly.”

Watching his videos, it’s easy to conclude that Dr. Jordan Eggman exhibits the first documented case of the male-cry voice. Maybe he wouldn’t need to repeat himself quite so much, maybe he’d be more convincing when explaining things like men are helpless before “crazy women” and “harpies” because it’s not socially acceptable for men to hit women and that this is “undermining the masculine power of the culture” in a way that will prove “fatal” if he didn’t sound quite so much like Gwyneth Paltrow accepting her Oscar for Shakespeare in Love.

It was a video that brought J-man back into the news this week. In July, he posted a video on his YouTube page laying out a plan to launch a website on which students and parents could have courses rated for them by artificial intelligence that could detect a “postmodern cult course.” His aim, he explained, was to cut off “the supply to the people that are running the indoctrination cults.” Ultimately, the champion of free speech said, he hoped the project would shut down whole departments that upset him.

MORE: The death of free speech? Come on.

One has to wonder why Dr. Pettyson felt the need to resort to artificial intelligence. He’s already concluded that the entire fields of “women’s studies, and all the ethnic studies and racial studies groups” “have to go,”and that sociology, anthropology, English literature, and education are all “corrupt.”

Surely a concerned student, or parent (I note Jordan Petersonny-don’t go-away-I-am-here-all-alone’s oft-expressed concern about overprotective parents is suspended when the terrifying prospect of ANT208, “Medical Anthropology: an Evolutionary Perspective on Human Health,” hovers into view) need only enter the name of the professor teaching a course. If that name isn’t “Jordan B. Peterson,” the class is probably a post-modern neo-Marxist brainwashing scheme.

Understandably, this plan to unleash grumpy-old-man Skynet on the academic world caused concern amongst his peers. The University of Toronto Faculty Association released a statement on Friday condemning Peterson’s website plan, without naming him directly; the group said it was “alarmed to learn that a web site may be under construction that is designed to place under surveillance certain kinds of academic content.”

No one can objectively look at the level of hyperbole used by Jordan Buttercup Peterson and his fanbase and not acknowledge that the Faculty Association’s concern is justified. I wouldn’t want to be a department at the end of those more than 500,000 Youtube subscribers and more than 250,000 Twitter followers.

But you can breathe easy, neo-Marxist conspirators for whom there is “nothing but power” and who, says Petersonshine, are motivated only to ”accrue all the power to them”—the plan has been put on hiatus until he can find a way to avoid adding “excessively to current polarization.” Two days after the faculty association’s statement, J. Pete the Beet announced that he had consulted a Twitter poll and decided to shelve the plan.

“I was going to put an end to your pomo-Marxist plotting once and for all but a third of respondents to a Twitter poll advised against it, so you’re safe… for now!” cried the last great defender of masculine Western civilization.

But woe betide those fields that have abandoned serious inquiry and empirical evidence and have become cult-like: Guru Jordan will vanquish you—just as soon as he’s done prepping his course, Psychology 434: Maps of Meaning.

In this rigorously academic course, students learn how “every experience that you have had contains information. If you have fully processed the information in that experience, (1) its recollection will no longer produce negative emotion and (2) you have learned everything you need to know from it.”

I’m hard-pressed to find a course on Chaucer that comes this close to promising to clear my thetans.

It’s easy to assume Peterson is deserving of respect. A lot of what he says sounds, on the surface, like serious thought. It’s easy to laugh at him: after all, most of what he says is, after fifteen seconds’ consideration, completely inane. But in between his long rambling pseudo-academic takes on common self-help advice and his weird fixation on Disney movies, is a dreadfully serious message.

What he’s telling you is that certain people—most of them women and minorities—are trying to destroy not only our freedom to spite nonbinary university students for kicks, but all of Western civilization and the idea of objective truth itself. He’s telling you that when someone tells you racism is still a problem and that something should be done about it, they are, at best, a dupe and, at worst, part of a Marxist conspiracy to destroy your way of life.

Peterson says he only thinks of it as a “non-violent war.” But when you insist the stakes are that high, the opposition that pernicious, who’s to say where the chips will fall?