Tom Parkin: By delaying a by-election call for months, the Liberals are sidelining their opponent, and denying thousands of Canadians a voice in Parliament 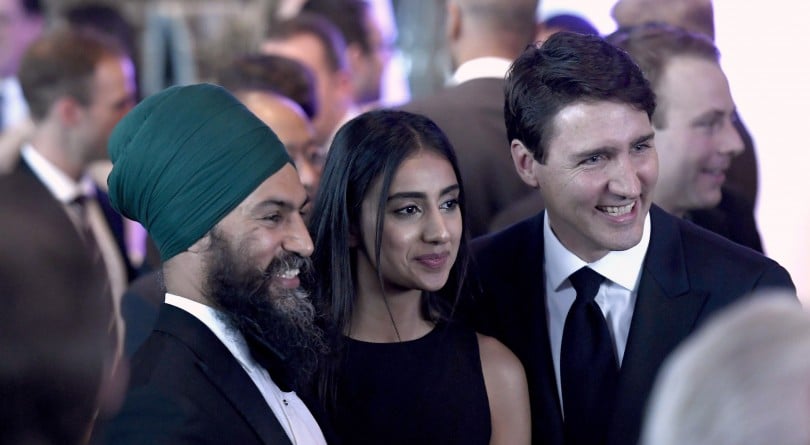 Prime Minister Justin Trudeau poses for a photo with NDP Leader Jagmeet Singh and his wife Gurkiran Singh at the Parliamentary Press Gallery Dinner in Gatineau, Que., on Saturday, May 26, 2018. (THE CANADIAN PRESS/Justin Tang)

For weeks now, when questions about the Burnaby South by-election arise the Trudeau Liberals have deployed a coy deflection. The Liberals, say the Liberals, are considering whether to extend ‘leader’s courtesy’ by not running a candidate against NDP Leader Jagmeet Singh.

It’s not about courtesy. If Trudeau was courteous, he’d have called the by-election already. It’s about delay.

Back on Aug. 8, Singh announced he’d seek election in Burnaby South, the former seat of NDP MP Kennedy Steward, who is now the leading candidate for Vancouver mayor.

Now, more than two months later, Trudeau is blocking Singh’s laneway to the Commons, where Singh can present himself to Canadians and they can judge his performance. That doesn’t seem courteous.

But then again, driving slow in the left lane and letting traffic pass on the right has been Trudeau’s signature.

Singh was a member of the Ontario legislature until his election as federal NDP Leader last October. He has never been a Member of Parliament.

READ MORE: On the economy, is it Trudeau’s sunny ways or Singh’s rainy days?

About one week after Singh’s mid-summer announcement that he’d run in Burnaby South, Green Party Leader Elizabeth May said she wouldn’t field a candidate against him. It sounded like a soft endorsement of sorts. Given the context—Burnaby is the terminus of the controversial Trans Mountain expansion–without a candidate, Green voters will likely flow to Singh, helping elect him.

In a less generous interpretation, May realized that should Singh lose the by-election to a pro-pipeline Trudeau candidate, and if Green votes were the difference, there would be repercussions. Or accusations.

Whatever motivated May’s decision, the Liberals riffed on it to advantage, hemming and hawing about courtesy rather than answering questions about dates.

And the Liberal lane-blocking game isn’t just discourteous to Singh. It may not have occurred to those in the PMO–who often grow dismissive of the lowly House of Commons and it’s annoying Question Period–but it’s not very courteous to people of Burnaby South. They have no elected representation in the House of Commons.

And they’re not the only ones. There are also vacancies in York-Simcoe, a suburban Toronto riding, and Outremont, in downtown Montreal. And since May 2 there has been a vacancy in Leeds-Grenville-Thousand Islands and Rideau Lakes, which arose due to the sudden death of well-liked Conservative MP Gordon Brown.

In recent years, electoral laws have been changed to limit a Prime Minister’s ability to gain partisan advantage by delaying or quickly advancing by-election calls. Trudeau is pushing those limits. Now, more than six months after Brown’s death, Trudeau is legally compelled to call a by-election to replace him within about two weeks.

If Trudeau follows the same strategy of delay in Burnaby South, he could deny Singh his seat until March, 2019. Not courteous.

The implied logic behind ‘leader’s courtesy’ lies in some conception of the Commons as an honourable gentleman’s club of deliberation. There’re not enough words here to unpack that. But we can quickly see that over 50 years it’s a not a logic consistently applied.

But a Liberal ran against Progressive Conservative Leader Brian Mulroney, in the Central Nova by-election of 1983. And in by-elections in Burnaby-Coquitlam in 1962 and Nanimo-Cowichan in 1968 the Liberals twice tried to defeat NDP Leader Tommy Douglas.

Occam’s razor argues for the simplest explanation about the principle of ‘courtesy,’ one which sits easily with what we know about politics: there’s no principle to it at all. It’s about power. If the Liberals think they can destabilize an opponent, they run.

How voters in Burnaby South will respond to Jagmeet Singh is unknown. How he might perform in the Commons is unknown. But one thing is certain. Each day those factors remain unknown, each day he can keep Singh on the margins, is a good day for Justin Trudeau.