Opinion: Most of those who pay to watch him play disagree with him, and many are members of the litany he claims will suffer for eternity. It is outrageous to insist that they remain passive in all this. 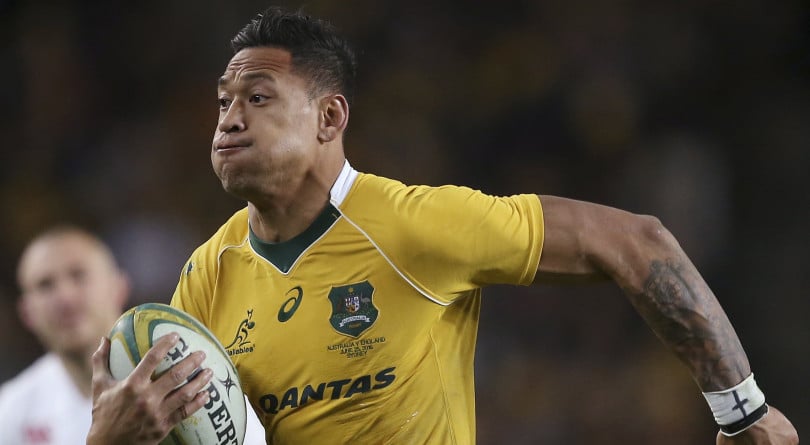 In this June 25, 2016, photo, Australian rugby union player Israel Folau, wearing tape on his wrist adorned with a cross, runs toward the try line to score against England during their rugby union test match in Sydney. Folau, one of the sport's top players, published a message on his Instagram account that said "drunks, homosexuals, adulterers, liars, fornicators, thieves, atheists, idolators. Hell awaits you." (AP Photo/Rick Rycroft)

Israel Folau is one of the best, most highly paid, and famous rugby footballers in the world. He’s played more than 60 times for his country, is the fourth highest scoring Australian international player of all time, and even has a street named after him. He’s also a Pentecostal Christian who has gotten into trouble in the past for his public anti-gay statements, and has now posted on Instagram that “drunks, homosexuals, adulterers, liars, fornicators, thieves, atheists and idolaters” are going to hell.

This was the last straw for Rugby Australia, the sport’s governing authority, who have terminated his contract for what they describe as a “high level” breach of the players’ code of conduct. This comes as Australia prepares for the rugby World Cup later this year. It’s been confirmed that Folau, a superstar who would make any national team, will not be selected.

The chief executive of Rugby Australia, Raelene Castle, has explained that there had been earlier warnings, and apparent agreements from the player that had then been broken. She insisted, “this is not a religious discussion, this is a discussion around the employee-employer relationship.” Folau has been condemned by many in the rugby community, but England player Billy Vunipola, also an evangelical, has been severely reprimanded for publicly supporting Folau and posting that, “Man was made for woman to pro create that was the goal no?”

It doesn’t take a genius to realize that adulterers, liars, and fornicators aren’t the people who are at issue here. Atheists are, but most particularly – and dangerously – is the LGBTQ community. Nor is this some academic or morally and politically neutral issue, because there are still 70 countries where homosexuality is illegal, and seven of them impose the death penalty for consensual same-sex acts. In two-dozen other states gay relationships can lead to arrest and imprisonment. Just recently Brunei introduced new laws punishing gay sex with death by stoning.

As a Christian, I find Folau’s post to be painfully reductive, theologically flimsy, and totally contrary to the unconditional love not suggested but demanded by Jesus. It pains me that a teaching so pristine in its gentleness and so affirming of the human condition should be twisted into a creed of loathing. Be that as it may, however, does this man have a right to say these things, and should he be penalized for so doing?

They are two different questions, of course. In a perfect world hideous statements like this would not be made, but both the law and our cultural and philosophical assumptions about free speech are designed precisely to respond to imperfection. People do offend and will offend, and beyond libel and direct calls for violence, most of us would allow the sewers to breathe. Partly because we can’t completely prevent it but also because any attempt to over-police free speech would have deeply troubling and even authoritarian consequences.

The other aspect of this is whether such undoubtedly noxious comments should enjoy a special protection because they are made under the guise of religiosity. When, for example, in 2017 Kevin Pillar called Jason Motte a “f****t” he made a long and seemingly heartfelt apology and accepted his two-game suspension. It was a barroom slur, made in anger, and while unacceptable had none of the horribly eschatological underpinnings involved in the Israel Folau posting. The Australian has made similar comments in the past and gone unpunished, and even now there are many Christians and libertarians rushing to his defence. He himself is aggressively unrepentant.

It seems to me that the response to this latest situation is about right. The man does have a right, has to have a right, to believe and even proclaim that most of the world’s population is destined for hell, but similarly he has no special privilege to make such hideous predictions without reaction. Most of those who pay to watch him play, or buy the products he endorses, disagree with him, and many are members of the litany he claims will suffer for eternity. It is outrageous to insist that they remain passive in all this. There’s something else. Athletes who represent their country do exactly that – represent. There are many athletes whose religious beliefs are not of the mainstream, but they appreciate the need to separate what is their right to believe from what is their responsibility not to alienate and marginalize.

While Folau will now be lionized by the Christian right, along with the league of people who have refused to bake cakes, make dresses, or take photographs for same-sex weddings, his story is actually a tragic one. His sporting gifts will not be seen by the millions who used to watch him, and the faith he claims to embrace so deeply will once again be tarnished.

Perhaps the last and best word should go to the former captain of the Welsh rugby team, Gareth Thomas, who came out in 2009. “Telling teammates I was gay was the toughest thing I’ve ever done,” he said. His coach said to him, “You can’t go through it alone, and these people love you.” Love. Sounds just a little more Christ-like than what poor, misled Israel Folau has been saying.