It's not all about their base: Canada's 2019 election will hinge on these voters

Opinion: Entrenched partisans won't choose the next government, it'll be the moderates in between—and the people who influence them 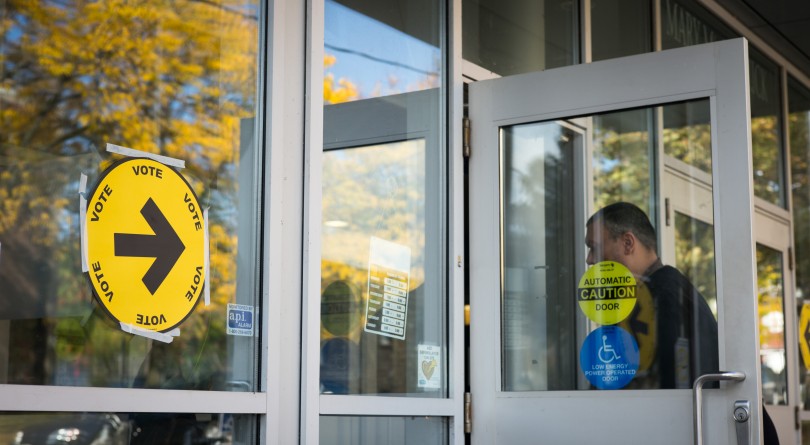 Voters make their way in and out of the polling station at the Mary McCormick Recreation Centre, in Toronto's Davenport riding, during the 42nd Canadian general election October 19, 2015 in Toronto. (Ian Willms/Getty Images)

Bruce Anderson is the chairman of Abacus Data and Summa Communications, and has been a prominent pollster, communications counsellor and political analyst in Canada for many years. He has worked on election campaigns for both the Progressive Conservatives and the Liberals, but does not work for any political party now. He wishes readers to know that one of his daughters is director of communications to Prime Minister Justin Trudeau.

At a Sunday rally in his Quebec riding of Papineau to announce that he will be running in the next election, Prime Minister Justin Trudeau told the crowd that he plans to fight that campaign, in part, by arguing against polarization. So it’s a fair question to ask whether there’s much of a market for that message.

After all, if you follow Canadian politics on Twitter, you could be excused for thinking everyone has their minds made up about everything. But Twitter doesn’t really reflect how your average Canadian voter is built, who spend less time thinking about politics, and they prefer life that way. They’ll make up their mind about what to do with their ballot as election day closes in.

In recent years, analysis of politics has been dominated by references to “the base,” or the core supporters of each political party. This is odd because they are the least interesting voters. Mostly, the base is made up of people determined not to be distracted by new facts or better arguments in their support for their party.

Instead, election victories happen when parties aren’t just successful in getting out the votes they can usually count on, but when they win the ones they have a shot at. Yes, getting your base excited feels good—but it’s a mere sugar high.

In fact, the base can harm that effort to win that broad non-base group of voters. While savvy parties know there is a big pool of swing voters they might be able to attract, they also know that a fired-up base often doesn’t want to compromise much to make that happen.

The run-up to the next federal election is a good moment to get out of the rut of thinking only about party bases. And if you look beyond them, you’ll see the voters who will really decide the election—a group that eschews hardened ideology and that is left cold by polarization and division—and why the issue will indeed be something all the federal parties will want to take into account entering the campaign.

Today, 57 per cent of Canadians say they’d prefer to see a different government in 2019, according to the latest poll from Abacus Data—and to put that number into perspective, that’s close to the number that didn’t vote Liberal in 2015, when the Liberals swept to a majority win. But Trudeau’s opponents can’t really count on these votes today; roughly half of these people say they could be persuaded to give Trudeau a second term. That amounts to about 27 per cent of the electorate, or about 8 million people.

Let’s call those people the Persuadables. And as I see it, these are the true battleground voters; after all, 8 million votes is much more than the 1.6 million votes that represent the highest margin of victory for the winning party in the last several elections.

These people are typically unhappy about some things the government has done; think electoral reform, Trans Mountain Pipeline, plans for a carbon tax. But they aren’t sure if any alternative would be better. So they look at each issue in a pragmatic, non-polarized way. They crave a more sensible, down-to-earth, less bombastic pitch.  They don’t want their cost of living to go up, but they worry about climate change and think if you don’t like carbon taxes you should at least have another idea that could work.  They may not be happy about owning a pipeline but worry that the economy will take too big a hit if we try to shift off oil too quickly.

These voters are well within the reach of opposition parties, but base-rallying messages aren’t going to close the deal. While party membership rolls include a lot of people with a left-leaning or right-leaning world view, Canadians are generally suspicious of hardened ideology. Across Canada, 89 per cent of Canadians believe the country works best “by finding middle ground and compromise,” and 92 per cent of Persuadables feel this way.

So if the right target market is the Persuadables, but they aren’t following politics very closely, how do you reach them?

As traditional media platforms lose market share and influence, we’ve seen peer reviews gain influence and trust. And in politics, the view of a friend who’s attentive to politics can make a big difference in a tight election.

Our research is honing in on about 3 million voters who believe they influence the political opinions of their circle. “Persuaders” you might call them.

Who are Persuaders? Half are men, half women, 60 per cent are under 45—a decidedly younger crowd. Fifty-three per cent would consider voting Conservative, 59 per cent Liberal, and 61 per cent NDP.  In short, they are up for grabs.

But Persuaders are sort of the opposite of base voters. Compared to other people, they are almost twice as likely to feel strongly that “Canada works best by finding middle ground and compromise,” and twice as likely to say we “need pragmatic solutions that serve most people, even if they don’t satisfy the far left or far right.” Eighty-three per cent would prefer a more progressive Conservative Party and 77 per cent of them a more centrist NDP.

When their friends turn to them for advice in the months leading up to the election in October 2018, they’ll be looking to recommend choices that fit this idea of how the country works best.

If you’re interested in a different way to observe the run-up to the next election, keep the 8.5 million Persuadables and the 3 million Persuaders in mind. They’ll be more interesting than stories about each party’s base—and together, they’ll decide the direction of the country for the years to come.