It's not what the Church has done, it's that we don't really care anymore

Scott Gilmore: The latest scandal unmasks far more than the institutional rot of the Catholic church—it reveals a profound shift in society and human history 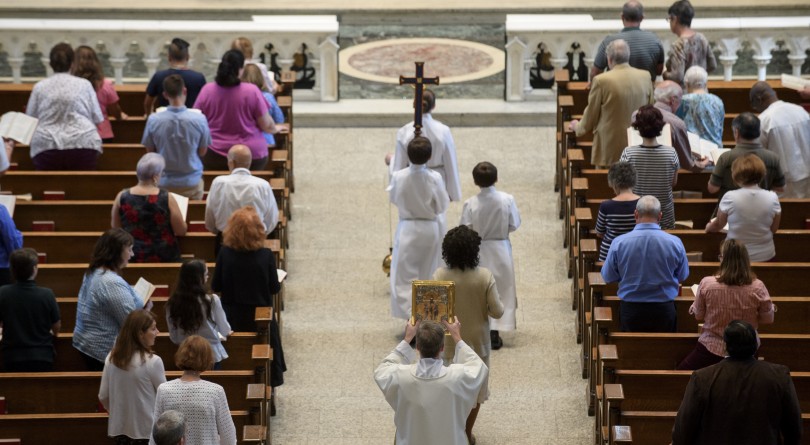 Parishioners worship during a mass to celebrate the Assumption of the Blessed Virgin Mary at St Paul Cathedral, the mother church of the Pittsburgh Diocese on Aug. 15, 2018 in Pittsburgh, Pennsylvania. (Photo by Jeff Swensen/Getty Images)

There is a great Sherlock Holmes story (they’re all great, to be honest) where the detective brings to the attention of a policeman the “curious incident of the dog in the night-time”. The officer is puzzled at how this relates to the crime being investigated, because the dog in question had done nothing in the night-time. Holmes responds that dog’s silence was the curious fact that provided the key to solving the mystery.

I was thinking about this yesterday as I read through some of the news regarding the latest abuse allegations being made against the Catholic Church. Earlier this month a Pennsylvania grand jury released a lengthy report detailing the sexual abuse of over a thousand children by more than 300 “predatory priests”.

It struck me that the public response has been relatively muted. Yes, there have been outraged calls for further investigations. Practicing Catholics have expressed their anger and the Pope himself has condemned the abuse. But, the wider public is not shocked.

There was a time when revelations that priests abused a thousand children in just four dioceses would shake society to its core–it would spark a global crisis of faith. As far as I can tell, this is not happening.

There is no doubt we are growing numb to scandals like this. Last month the Pope removed an American Cardinal after allegations that he raped an altar boy. In May, a papal investigation revealed that the Church concealed decades of wide-scale child sex abuse in Chile. The revelations have sparked criminal investigations into 158 bishops, priests and other church officials. At about the same time, an Australian bishop was found guilty of covering up the crimes of a pedophile priest who preyed on altar boys in the 1970s.

READ MORE: Canada’s MPs call for a residential-school apology—exposing a Church in crisis

A year earlier, also in Australia, a cardinal who was effectively the Pope’s Finance Minister, was charged with multiple sexual assaults. At around the same time, an Australian Royal Commission revealed that between 1950 and 2015, an estimated 7 per cent of priests in that country had committed child abuse. And this is all just in the last year.

Around the world, the Church has been rocked again and again by sexual assault scandals for decades. In 2014, in India, a vicar was arrested after raping a nine-year-old girl—a few months later three other priests in the same state were charged with similar crimes. In 2009 a Norwegian bishop resigned because of his abuse of a child two decades earlier. In 2004 a church funded investigation in the United States uncovered allegations against 4,392 priests. In 1994, the President of a prominent Catholic college was forced to resign after allegations of sexual assault. I could literally fill thousands of pages with sentences like these.

Hundreds of those pages would describe Canadian incidents. Every one of our provinces have witnessed these crimes, from Newfoundland’s Mount Cashel Orphanage to Quebec’s Collège Notre-Dame du Sacré-Cœur to the imprisonment of British Columbia’s Bishop O’Connor for raping two young Indigenous women. And, of course, looming over all of these are the decades of abuse committed in the residential schools—a horrendous crime for which our nation will spend decades atoning.

But I think the public’s lack of shock at the latest revelations from Pennsylvania is not just because we’ve become inured to these abominations. It is because there has been a profound and historic shift in our civilization.

In the 1940s almost 70 per cent of Canadians reported weekly church attendance. By 2015, that number was less than 10 per cent (and only 5 per cent in Quebec). Those who are still going to church are also far older than the national average, indicating that these numbers will soon fall even further. The story is similar in the rest of the developed world. Membership in the Church of England is at an all time low. Church attendance in the United States has been declining since World War Two. A recent Pew Research poll found that millennials, by a wide margin, are the least likely to believe in God.

The human species, for as long as we can tell, has been a religious one. The earliest burial sites contain offerings to the gods. Our hunter-gatherer ancestors built their first settlements around ritual sites. For thousands of years, civilizations from the Nile Valley to the Polynesian islands were grounded in collective religious beliefs. We evolved with a universal conviction that invisible gods control all that is visible, and we have behaved accordingly.

In the western world, for the first time in our history, this is changing. For the majority of us, our religious beliefs (if we even have any) no longer define us. We do not look to a holy book for explanations; we do not turn to a priest, or rabbi or imam for comfort. We do not go to a temple or shrine for guidance.

Even though it has happened over a period of a few short decades, the change has been gradual enough to largely escape the average person’s notice. We are aware of the fact we don’t go to mass as often as our grandmother did, but we don’t really consider the implications. Nonetheless it represents a shift in human history that is comparable to the fall of feudalism.

I am not going to argue whether this sudden, recent and dramatic shift in human history is good or bad (at least not in this column). But it is our curious incident of the dog in the nighttime. The church’s scandals are horrifying and momentous and it will take us decades to deal with them. But it is our relative indifference to the scandals that is revealing the greatest societal change in our lifetime. And that is something with which we may spend centuries grappling.