Scott Gilmore: Decades of waste and failure prove Canada is simply incapable of building ships for our navy. There's only one way to end the insanity once and for all. 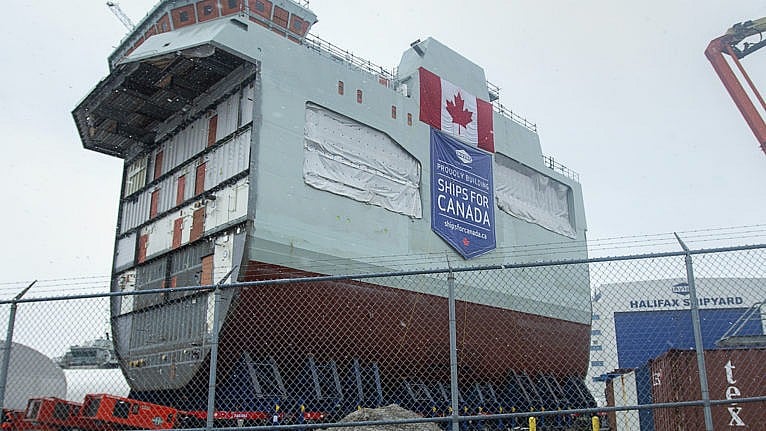 The centre block of the future HMCS Max Bernays sits at the Irving Shipbuilding facility in Halifax on Jan. 22, 2021 (CP/Andrew Vaughan)

Have you ever witnessed someone do something utterly shocking, but because they have done it so many times, you are no longer capable of being shocked on an emotional level, even though intellectually you know you should feel something?

That is where everyone who pays any attention to Canadian defence procurement is right now, and has been for years if not decades.

This week the parliamentary budget officer, Yves Giroux, went through the annual ritual of revealing that the Royal Canadian Navy’s badly needed frigates will now cost more money, and will arrive later than expected. What began as a $26-billion project 13 years ago will now take an extra decade, and will likely cost $77 billion. And, spoiler alert, Giroux added that the final price tag may (read: most certainly will) exceed $82 billion.

How many thousands of ships will we get in return? 15.

Canada could buy similar frigates from the Americans, French or even Australians. Our current price tag is between four and five times more expensive than theirs. Why? No one ever really has an answer. Our defence officials continually tweak the designs, with more and more expensive additions. Our sclerotic shipbuilding industry can’t tie its own shoes on time or on budget. And both have small armies of supporters who convince gullible Canadian politicians that there is nothing more sacred than a shipbuilding job. All of them and none of them are to blame. It is what it is: a chronic, painful, incurable, mess.

If you stop reading here, I get it. I want to stop writing. There is possibly no other issue in Canadian politics as tedious and draining as defence procurement. Literally everything the Canadian military buys turns into an obscenely expensive mess. Just off the top of my head I can list uniforms, supply vessels, used submarines, search and rescue aircraft, drones, tanks, trucks, strategic lift aircraft, F-35s, Chinook helicopters, their new headquarters, rifles, and of course the legendary Sea Kings, as recent examples of purchases that took decades to complete and went over budget by astronomical amounts.

As a result, Canada’s armed forces have become increasingly ill-equipped (to the point that we no longer even have workable submarines or a navy capable of crossing the Atlantic unassisted). Every Canadian government, as far back as the 1960s, has dealt with a procurement scandal. And every single Canadian has picked up the tab, year after year after year. It’s long past time we put an end to this insanity.

Let’s accept the fact, proven repeatedly for decades, that Canada is simply incapable of building ships for our navy. And then, let’s just buy the damn things from the French, get them years earlier, and save ourselves $66 billion.

“But what about the jobs?!” I can hear the lobbyists cry. Yes, let’s talk about the jobs. According to the government of Canada’s own figures, only 11,100 people are employed in Canada’s shipbuilding industry (we have more massage therapists). If we were to add on those indirectly employed, that number creeps up to 15,200. Now, let’s pretend the Canadian frigate contract is the only shipbuilding job out there, and buying from France would mean every one of those 15,200 people would be out of work. If we were to give each of them $1 million in compensation, Canada would still save over $50 billion (in addition to getting the ships faster).

After that is done, let’s make sure this never happens again by making it illegal to buy warships made in Canada. This would relieve pressure on future governments to re-open this Pandora’s Box of madness and waste. When some future scion of the Irving family demands to know why Canada is not paying billions for new ships, future prime ministers can just shrug and explain their hands are tied. “We tried that. For a long time. It never worked. Sorry.”

To be extra safe, we may also want to legislatively remove all Canadian defence officials and bureaucrats from any future ship procurement process. We could implement a form of conservatorship—appoint experts from countries that can build ships (such as Australia or France), and task them with deciding what we need and when we need it. This sounds extreme, but let’s be objective here: how many more decades of waste and failure do we need to prove our officials are utterly incapable of this task.

I wish I was being satirical, but really, at this point the question is not, “Can Canada figure out how to buy naval frigates responsibly?” The only question is, “What can we do to end this insane cycle of waste and incompetence?”