It's time to hit the reset button on Canada's MMIWG inquiry 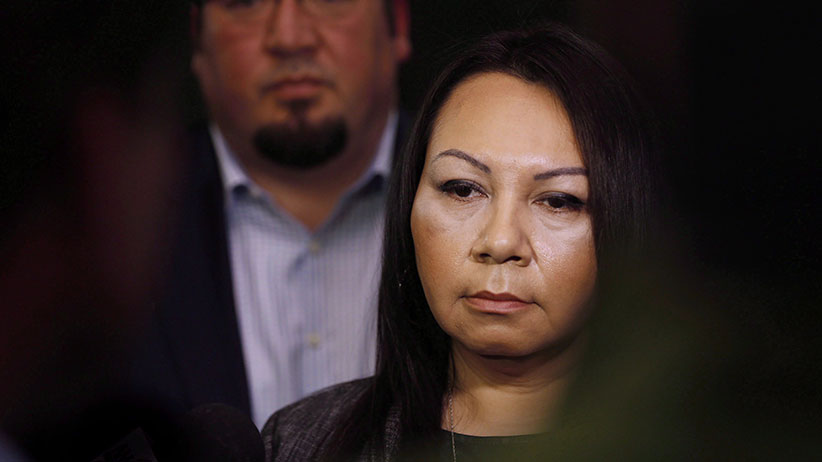 On a beautiful summer day in 2005 on the outskirts of Winnipeg, I attended my first vigil for a murdered Indigenous woman named Fonessa Bruyere. Her body was found by a tree. Reporters back then did not describe women and girls like her as a loved daughter, sister, or cousin. Instead, she and others were labelled as many of our murdered and missing Indigenous women have been—a prostitute or a street worker—instead of what they were: sexually exploited women and girls. As if that somehow made the violent end to her life justifiable.

But Fonessa was loved, and the dozens of people in their pain and grief spoke to the significant loss to the community. Family and friends of the young woman wailed while the rest of us stood around feeling stunned and heartbroken.

As I talked to more and more families and survivors about this issue, I realized I myself had almost fallen into the grips of violence. As a young person, I grew up in Bunibonibee Cree Nation, where we took care of each other. I naively assumed that the same kindness would be demonstrated in Winnipeg, the city I moved to in 1987 as a teen; I was vulnerable and there were people who tried to take advantage of me. It was only by the grace of God that I managed to survive.

As I started researching the stories behind the growing number of MMIWG cases, I heard stories of girls and women forced into unsafe situations just to meet their basic survival needs, like shelter, food, and clothing—a violation of fundamental Indigenous human rights, the likes of which are still supported under the Indian Act. When Indigenous women would go to the police for help, their requests would often fall on deaf ears, and they were sometimes even met with condescension and sarcasm; imagine not knowing where your loved one is and having a police officer tell you, “Oh, so-and-so is probably out on a drunken bender, just wait a week, they’ll be back,” like that somehow makes an individual less deserving of a proper response by police. By not being afforded the same safety as others, women become vulnerable to men, from all cultures and socioeconomic backgrounds, who take advantage of vulnerable women and girls. Before long, many fall victim to cycles of abuse, stripping our women and girls of their dignity and self-worth.

But Indigenous women did not stay silent. We started talking openly about the issues around MMIWG and what we were seeing going on around us. We started taking to the streets and other public spaces to tell the world what was happening in an effort to stop other women and girls from being taken off our streets and away from families. Many of us also thought it was time to push back against systems and the larger society who continued to turn a blind eye to this crisis. When, we asked, did violence against Indigenous women and girls become so normalized that men and persons with positions of power, including the police, think it’s okay to do what they want with our women and girls, to discard us with little or no consequence at all?

Families of missing or murdered women and girls would hold memorial vigils to remind us all of how much they missed and wanted answers about their loved ones. I was blown away by how giving affected families were; even though most lived in poverty, they managed to find a way to feed everyone and often gave gifts to show their appreciation. They gave everything they had expecting nothing in return, except continued help to find their loved ones. Sometimes there were three people at the vigils we organized; other times, there were 3,000. But no matter if it was 30 degrees Celsius or minus 30, you would find our community holding signs, sometimes with their children, singing songs of resistance that cried out for a better world for our women and girls. The vigils became more prevalent, so our voices became louder, and awareness around MMIWG issues became stronger year by year.

There was no one mastermind in any of it, though. It was led by the heart—a woman’s heart. While there were a few men who attended every vigil and candlelight ceremony, it was the women and girls who packed up their drums, their long skirts, their children and their resolve to stand up for others every time word came out about another mysterious death or disappearance.

This experience of community activism is why I believe Canada’s inquiry into missing and murdered Indigenous women and girls needs to end—and start fresh, with new leadership. 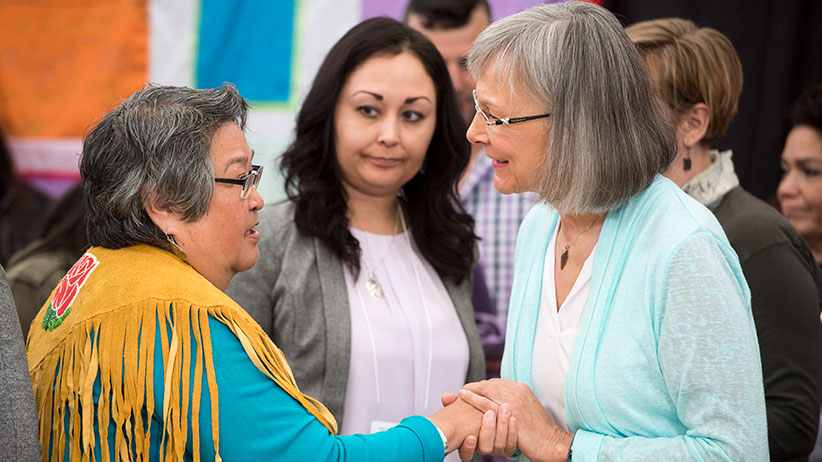 Chief Commissioner Marion Buller (right) greets Frances Neumann after she told a story about her murdered sister-in-law Mary Johns at the National Inquiry into Missing and Murdered Indigenous Women and Girls taking place in Whitehorse, Yukon, Tuesday, May 30, 2017. (Jonathan Hayward/CP)

The number of MMIWG cases appears to be growing every year, despite the valiant effort to stop the trend. All the while, governments and police authorities seemed hesitant to really look at the root causes of this issue—causes that have been noted at the United Nations, an organization that has likened the current situation to a crisis. It is one of the main reasons many started calling for an inquiry into MMIWG in the first place; families, friends and advocates wanted and still want justice, safety and better opportunities for our Indigenous women and girls, and felt some hope when the new Liberal government made a promise to hold a national inquiry and find answers once and for all.

I too felt a huge sense of relief—at first. It seemed to signal a refreshing change from the former Harper government; at least the Liberals seemed committed to move on this issue. However, red flags started appearing immediately. The inquiry omitted policing as part of the inquiry’s Terms of Reference—because, in my opinion, doing otherwise would show that the police are part of the problem, and the government wouldn’t want the legal responsibility that may arise out of that—despite a clear indication by families that policing must not be ignored because it was the root of many of the complaints. Then, in June, four high-level staffers stepped down from the inquiry, including executive director Michele Moreau; on July 11, commissioner Marilyn Poitras announced she was quitting, too.

We have also provided the commissioners the benefit of the doubt. But with $11 million already spent, there is little to show for it. There has been one public hearing in two years. Families are growing increasingly discouraged and impatient. Moreover, the turmoil being caused by a lack of communication from the commissioners to the families, friends and survivors is resulting in waning trust by our community. Every step of the process should be led by the families, friends, and survivors; this has not happened. Every decision—from choosing the commissioners, to designing the process and terms of reference—should have been guided and directed by the grassroots people who brought this issue to the forefront in the first place. Lastly, the government has a choice to continue forward with Terms of Reference that have been highly criticized, or make a revision to include policing and child welfare. They have the authority and power to do so.

No matter how brilliant lead commissioner Marion Buller may be, it’s clear the inquiry is struggling, and its effectiveness is in question by the people who need it the most. Our women and girls have fought for and waited for this for too long to be left by the wayside in confusion and mistrust. The MMIWG inquiry needs a restart even though it could cause delays. There is too much at stake and too many lives at risk for this process to be rushed through and led by inept commissioners.

I say all of that with the utmost respect to all involved now. But families, friends and other advocates stuck out their necks for others, and I don’t mind doing the same now in calling for a restart to the national inquiry.