It's time to leverage Canada's energy advantage into a geopolitical one, too 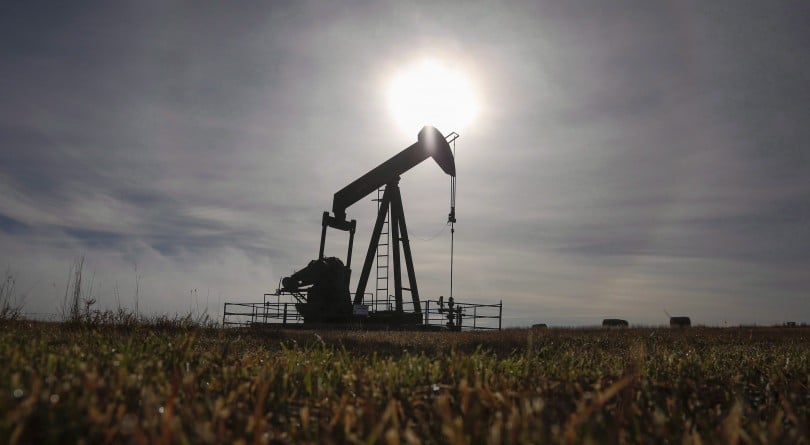 A pumpjack works at a well head on an oil and gas installation near Cremona, Alta., Saturday, Oct. 29, 2016. (Jeff McIntosh/CP)

Shuvaloy Majumdar is the Munk senior fellow for foreign policy at the Macdonald Laurier Institute, and a former policy director to Canadian foreign ministers.

For many, Canada’s role in geopolitics and world affairs is often centred on what we can do with our intellectual and cultural talents. We see ourselves as a country best suited to act as a teacher, a mediator, or a good example. We cling to a Canadian diplomacy from an international order of a different age.

But this excessive focus on Canada’s social capital can distract from the fact that we actually are internationally distinguished on one important front: energy.

Canada is a world leader in its supply and mastery of virtually every energy resource and technology known to man—and with this enviable access to the assets that fuel 21st-century life increasingly reflecting real political power on the world stage, Canada has the ability to position itself as a true global leader. The sheer size of Canada’s energy interests ensures virtually no corner of the globe is beyond our influence, and should we choose to seize it, we have a unique opportunity to both supply our allies with the energy they need to serve a shared goal of global prosperity, while also lessening the energy influence of the world’s bad actors.

A survey of the world’s geopolitical evolutions, tensions and conflicts shows that the globe’s economic centre of gravity has shifted steadily eastward as once-emerging and now surging markets in the Indo-Pacific region enjoy a phase of steady growth. So as economies like India’s require more and more energy, and rely more and more on supply routes from undesirable sources, the stakes—and the upside—is high for Canada.

Japan’s high-profile troubles with nuclear power, for instance, have fostered growing interest in renewables, but also coal and natural gas, both of which are produced by British Columbia. South Korea, meanwhile, is moving in the opposite direction, embracing nuclear at the expense of non-renewables, domestically and internationally. Prospects for Saskatchewan’s stable, long-term nuclear fuel supply should be part of this strategy.

China’s energy imports, meanwhile, have mirrored larger trends in its decisively illiberal foreign policy. Close relationships with Russia and Venezuela have kept China awash in petroleum, while Beijing plays defence for the atrocities of Putin and Maduro regimes in international forums. While remaining sensitive to the problematic aspects of President Xi’s own regime, there is reason to believe more Canadian oil to China could weaken his interest in propping up “gas station” client states.

In the Middle East, continued bad actions by the state of Qatar—including an alleged USD$1-billion ransom paid to Iraqi and Iranian terrorists—have resulted in appropriate calls for the country’s diplomatic and economic isolation. This provides ample opportunity for any nation willing to offer itself as an alternative to Qatari oil and gas, which is currently exported everywhere from Morocco to Japan.

Though the Middle East is synonymous with oil, it would be a mistake to assume this status quo is uncontroversial in the region. Awareness of the finite nature of petroleum reserves has fostered intense interest in energy diversification. Canada already has nuclear cooperation agreements with Jordan and the United Arab Emirates; these agreements should be animated with long-term Canadian supply.

It is perhaps in Europe, however, where the geopolitics of energy are most fraught, and thus most open to Canadian intervention. Already uncomfortably dependent on Russian oil, western Europe is on track to face a near-monopoly on Russian natural gas as well. As supplies from the Netherlands, Scotland, and Norway decline amid domestic environmental pressures, Moscow has been eager to fill the growing gap.

To make the situation even more troubling, recent years have seen the Putin administration forge a burgeoning energy alliance with the revanchist regime in Ankara. In May, Turkish and Russian governments inked a deal to authorize the construction of a new Gazprom pipeline entering Europe through the Black Sea, rather than Ukraine, thus allowing Moscow to further undermine its longtime geopolitical foe.

The leadership Canada can demonstrate in offsetting these negative trends is clear: we should fearlessly pursue our economic interests by making Canadian energy resources and technologies accessible to those who want them, offsetting allied dependence on worse alternatives.

But at precisely the moment when the world needs Canadian energy leadership, Canadian courts have overruled the will of the parliament, galvanized by foreign interests against energy production, and casting a shadow over the essential nation building our country must pursue. The Federal Court of Appeal’s decision to quash the Kinder Morgan Pipeline existentially imperils Canada’s global energy leadership. To be clear, the courts did not create the opposition of eco-warriors or the Indigenous communities that are implacably opposed to development, nor did they outlaw fracking in Quebec or points east, nor indulge the false prophecies that have crept into mainstream opinion of Canadian energy as a corporate evil to be mitigated. That’s on the government.

With growing uncertainty about whether this country has the capacity to get its energy to global markets, Canada has to do better. It is insufficient to merely repudiate the anti-energy agenda. A comprehensive Canadian energy action plan is needed to advance the essential resources that support the Canadian social safety net, and that can deliver Canadian leadership to a world that demands it.

We must liberate Alberta’s oil sands from their landlocked status to dramatically increase Canadian oil exports and, at the same time, Canadian power on the international stage. This means completing pipelines like Trans Mountain and Energy East, which are capable of dramatically increasing Canadian oil exports by transporting renewed quantities to our Atlantic and Pacific ports. In response to the FCA decision on Trans Mountain, the Canadian parliament should insist through legislation that the $4.5 billion pipeline the government now owns has met all requirements to be built. The legislation could encompass clarity on marine security, and provide parliamentary supremacy for a national mandate establishing pan-continental energy corridors across Canada to advance its global economic interests. The ruling implies that remedial consultations with Indigenous peoples can be pursued with speed.

We must open liquified natural gas export terminals on Canada’s east coast, allowing it to serve as a gateway point of Canadian natural gas to Europe. Canada presently has no LNG export terminals on its east coast, though several proposals are working their way through the approval process, with Nova Scotia’s Bear Head and Pieridae facilities the furthest along. As the gateway point of Canadian natural gas to Europe, these projects must be seen to swift completion. Any prohibitions on fracking in the region must be similarly lifted, which can be possible with the potential emergence of new provincial legislatures in Quebec and New Brunswick.

We must limit the damage of foreign interests who have worked to disrupt Canadian energy production. Manipulating grievances, fostering a culture of retaliation rather than reconciliation, and libellous commentary about Canadian energy have all manifested in a campaign to subvert core Canadian interests. The government can mitigate these foreign agencies by repealing the charitable status of bogus charities, work with industry to litigate against libellous declarations against Canadian energy, and ban disruptive financing against foreign agencies by imposing targeted sanctions.

And Canadian foreign policy should reassert a commitment to the central cause of enabling human development for global prosperity. For too long, climate-change policies have demanded that emerging economies extend the poverty of their people and delay their economic development, rather than accelerate this growth toward lessening environmental damage. Addressing energy poverty in the world boldly—where the young can light their homes to do homework at night, where industrial development builds smarter cities faster that pollute less, where traditional energy catalyzes transformative growth—should feature centrally in climate policy. Canada must pursue realistic climate-change policies that concede what much of the rest of the world already knows: environmental goals must be set in the context of these economic objectives, not the other way around. It is time to drop the sanctimonious posturing and reassert a proper balance.

READ MORE: For First Nations along Trans Mountain route, it’s not a simple dichotomy of ‘for’ or ‘against’

Canada enjoys thinking of itself as a country capable of inspiring others, but being a leader in the global community requires a willingness to exert state power in the pursuit of an admirable goal. Leading the establishment of a safe and secure global energy order, in sync with democratic values and shared prosperity, is tied deeply to the Canadian energy and national interests that have, as of late, endured a series of difficult challenges.

This isn’t the first time that Canada’s national interests have encountered obstacles. But Canada itself was forged by overcoming divisions with a big vision: uniting a country with ribbons of steel, and advancing a shared national purpose. For more than 150 years, our country has been unbroken by wars, and depressions and hard times. Our experience as one of the oldest democracies on earth affords us the opportunity to apply the lessons of an imperfect past toward shaping a promising future. In an uncertain world, Canada’s essential rise as a power hinges today on our ability to reconnect with the determination and resolve that has already overcome so much.