It's time we addressed our society's toxic 'purity culture'

Opinion: Rape culture and purity culture are two sides of the same coin—and women lose, no matter the outcome of the toss 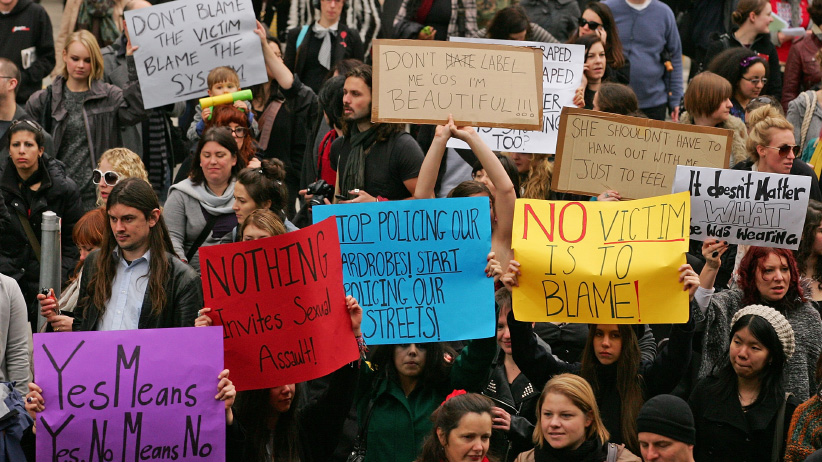 Protesters hold placards aloft during a Slutwalk march for the right of women to wear what they want without harassment on May 28, 2011 in Melbourne, Australia. The Slutwalk began with a small protest in Toronto, Canada, when women marched against a policeman who claimed he was told women should “avoid dressing like sluts in order not to be victimized”. Slutwalks are scheduled for Adelaide and Sydney as well as other cities in North America and Europe. (Scott Barbour/Getty Images)

The allegations of Hollywood as a hotbed of sexual misconduct, where the pervasive culture of intimidation and abuse was abetted and tolerated, has revealed an unbearably toxic culture. In it, women relied on “whisper networks” to protect each other from harm; it was understood one’s future in the industry hinged on submitting to powerful men; one’s body was ultimately a bargaining chip in a game of impossible odds.

Those who have come forward with disturbing accounts of coercion and abuse have, for the most part, been greeted with deepest empathy. But listen carefully to the talk of persistent “rumours”—George Clooney, for instance, telling The Daily Beast he’d heard “that certain actresses had slept with Harvey to get a role. It seemed like a way to smear the actresses and demean them by saying that they didn’t get the jobs based on their talent, so I took those rumours with a grain of salt”—and you’ll get a hint of another sort of “whisper network,” one that trades in judgement and innuendo.

For all the widely discussed reasons women remain silent when violated, the fear of being ostracized—believing oneself to have lost all fundamental value—is an under-appreciated aspect of the decision to self-censor. This goes beyond incidental “slut-shaming” and routine victim-blaming; the outright policing of women’s sexuality does tremendous harm. And while the exploitation of women’s sexuality is undeniably problematic, so too is the shaming and undermining of women who embrace their own.

Take, for instance, a recent op-ed in the New York Times from actress Mayim Bialik, who found childhood stardom in her starring role on NBC’s Blossom, and after a period of absence from the scene, returned to great success in The Big Bang Theory. Following the Weinstein scandal, she detailed her own awkward relationship with Hollywood, revealing a history of exclusion and general distaste for how women were widely treated.

In doing so, however, she demeaned other women for the choices they made—in the case of Harvey, for better or worse—and cast aspersions on success they found.

In her early years, Bialik wondered if she “should get breast implants to look more like Christina Applegate, who got so much attention for her curves.” She then boasts of fleeing Hollywood to earn a “doctorate in neuroscience… I craved being around people who valued me more for what was inside my brain than what was inside my bra.”

To be clear: There is nothing wrong with being, in Bialik’s words, a “perfect ten.” There should be no shame in finding success with an enviable appearance. To suggest actresses who did had no interest in being valued for their intelligence, or that their talents weren’t primarily sought, is insulting.

And she writes of making “self-protecting and wise” choices, deciding her “sexual self is best reserved for private situations with those I am most intimate with. I dress modestly. I don’t act flirtatiously with men as a policy.”

This is classic victim-blaming. There is nothing that will insulate women (or men, for that matter) from a predator. Further, reserving one’s “sexual self” for “private situations” will not protect from an abusive partner. Sexual assault and rape happen within monogamous, intimate partnerships. Marriage does not grant blanket consent.

And if a woman has confidence in her body and chooses clothing that accents and flatters it—so what? That’s not a moral failing. Neither is flirtation. And neither one is an invitation to harassment or assault.

There are many women who choose to downplay their sexuality, who hold deeply conservative beliefs and honestly try to live by the values they’ve been taught. Sometimes, those values are forced upon them. In either case, the illusion of protection inevitably ends, sometimes to traumatic outcome. When a woman is without experience to build on, she is guaranteed to find herself lost.

Elizabeth Smart was just 14 years old when she was kidnapped straight from her bedroom, stolen from the bed in her childhood home located in an affluent Salt Lake City neighbourhood, and forced to march under cover of night into the nearby mountains where she endured “nine months of hell” at the hands of her captor—Brian David Mitchell—including daily rape. Ten years after her abduction, Smart published a memoir and began advocating on behalf of survivors, criticizing a culture which compounded her torment. Smart firmly believes the sexual violence she experienced was made worse by her strict Mormon upbringing, one which glorified abstinence and fetishized purity.

“I was raised in a very religious household, one that taught that sex was something special that only happened between a husband and a wife,” Smart explained, and that was “a promise” she was determined to follow. “Well, then I was kidnapped… after that first rape, I felt crushed. Who could want me now? I felt so dirty and so filthy… why would it even be worth screaming out? Why would it even make a difference if you are rescued?” She felt she’d been stripped of all inherent value. As a “defiled” woman, she felt she now had nothing to live for.

Even after her rescue, as a high school student, Smart was subjected to teachings which compared pre-marital sex to having nails driven into one’s body and soul, something “you can repent, but the holes are still there.” Smart remembers thinking: ”Do they not realize I’m sitting in class? Do they not realize that I’m listening to what they’re saying? And then to hear a teacher come back and say, ‘Nobody wants you now’… You just think, ‘I should just die right now.’ ”

This purity culture has deep, oppressing consequences. When women fight for access to birth control by citing non-contraceptive uses—polycystic ovary syndrome, endometriosis, amenorrhea—as if a prescription for its use to simply enjoy sex without getting pregnant is a moral failing—we see the reach of this problem, of how we think about women’s sexuality. Women who’ve suffered female genital mutilation are victims of this virginity fetish, too.

Rape culture and purity culture are two sides of the same coin, where women lose no matter the outcome of the toss. And God forbid a woman find herself in a situation where there is no escape, where the safest option of the moment is submission: she’ll be whispered about and judged by both sides, and when she’s not dismissed as a liar, she’s considered a whore. There is no room for context or understanding—only guilt, shame, and blame. When the choice is between being physically or morally devalued, silence can seem the wisest, least threatening choice.

All the while, men are never required to justify themselves to society in this way. As New York Times columnist Frank Bruni put it in 2013: “Men get passes, women get reputations, and real, lasting humiliation travels only one way… it’s impossible not to ask what sort of world allows the victims of such assaults to feel more irredeemably branded—more eternally damned—than their accused assailants by all appearances do.”

The next time a woman is whispered about, rather than simply relaying the story, take a moment to ponder the man’s role in that situation. The burden in any consensual encounter doesn’t fall on just one side—it’s equal ground. And when an encounter doesn’t involve consent, the responsibility lies with the aggressor alone.

Policing women’s sexuality—or attire, or appearance—will not protect from harm. It will only compound the damage if harm occurs by adding additional layers of guilt and blame. A woman’s value doesn’t hinge on her sexual “purity,” and choosing abstinence doesn’t grant anyone moral superiority. It’s a personal decision, and nothing more. Removing shame from the equation—accepting that women, like men, have every right to sexual autonomy—is an important, necessary step toward ending silence when abuses occur.

When women no longer feel compelled to keep quiet for self-preservation at every level, predatory men are robbed of a powerful weapon.