James Damore doesn't understand women in STEM—or even STEM itself

Tabatha Southey: James Damore is suing Google for discrimination over his memo. But his beliefs ignore truths about science—and his own industry 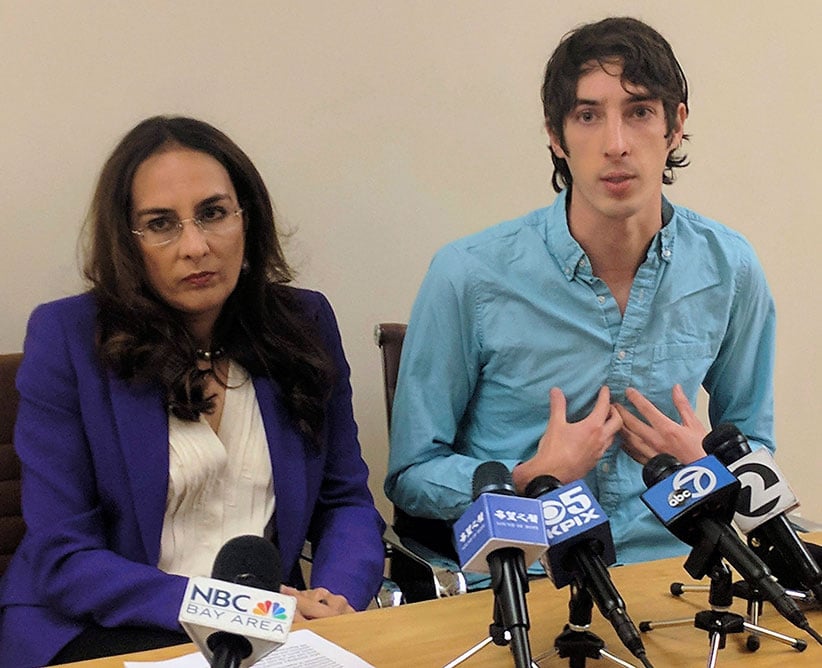 James Damore, right, a former Google engineer fired in 2017 after writing a memo about the biological differences between men and women, speaks at a news conference while his attorney, Harmeet Dhillon, listens, Monday, Jan. 8, 2018, in San Francisco. Damore discussed his lawsuit alleging that Google discriminates against workers with conservative opinions. (Michael Liedtke/AP/CP)

“Google’s Ideological Echo Chamber,” as Damore grandiosely entitled his seemingly Reddit-culled cherry-picked pie of a manifesto, is quite a read. In it, the former Google engineer—who recently announced he’s engaged in a class action suit alleging Google “singled out, mistreated, and systematically punished and terminated” conservative white men—collected and catalogued many of the theories both common and exotic about the inherent inadequacies of women in STEM that fly about. Women see these notions in the field all the time, but they can be difficult to pin down. These sightings, when women mention them, are often dismissed as imagined, irrelevant, “just a joke,”or even a wondrous part of God’s design they ought to be celebrating. It’s best to think of Damore as the lepidopterologist of misogyny.

Women have been talking about the gender bias in science, technology, engineering and mathematics (STEM), and the multiple ways that plays out in the lab, for a long time. Yet all of their collective-issue raising, all of the ass-grabbing anecdotes, and all of the many studies showing that women are at a disadvantage when pursuing careers in STEM combined have not been given as much attention as one of Damore’s Wikipedia-linking footnotes.

READ MORE: Why there are still far too few women in STEM

While he’s hardly alone, Damore’s laborious effort provides indisputable evidence of the attitudes that many women in STEM face. When a woman submits her resume, she knows it may be read by a Damore. When she negotiates a raise—an arena in which she’s damned if she does and, as the Google memo explains, too innately high in “agreeableness” if she doesn’t—she weighs the possibility that she’s negotiating with a Damore. When a woman takes maternity leave, she wonders how many of her colleagues are Damores, dismissing her as someone innately lacking the “drive for status.”

Damores are everywhere. Great flocks of Damores perch in their offices—or worse, on the corner of your desk when you’re up to your neck in stack traces—depositing their opinions on IQ differences on passersby and filling the air with their cry of “Women relatively prefer jobs in social or artistic areas.”

The percentage of women working in STEM has remained nearly stagnant for 30 years in Canada, and the reasons for this include having to work alongside the kind of man who might confidently explain, in defiance of the research, that differences between men and women “aren’t just socially constructed because they’re universal across human cultures.” Women comprised 20 per cent of the STEM workforce in 1987 and 22 per cent in 2015, while the number of women earning STEM degrees increased.

Despite what we’re sagely told, women are attracted to and are adept in these fields. That said, if research later shows that women are actually just biologically predisposed to accidentally earning a computer-science degree when all they wanted was to find LADY 101: Introduction to Cupcake Baking, I’ll bake James Damore cupcakes.

Many critics dismantled Damore’s science. I won’t delve into it again except to say that prenatal testosterone is not, as Damore would have you believe, some sort of creepy in-utero guidance counsellor who pops in at about 14 weeks and tells you not to listen to loud music when you’re trying to form red blood cells in your spleen and asks you if you’ve considered a career in hospitality and tourism management: “I’ll just leave this brochure over here on the placenta attached to the wall.”

Damore’s plodding in the muddy field of evolutionary biology hoping to prove that women are “on average” (his favourite caddish caveat) born to run art galleries is in the long tradition of men asserting that women’s biology means they can’t, for example, build munitions or planes—that is, right up until men desperately need them to build munitions and planes, at which point we apparently genetically reengineer ourselves with a hairnet and get to work.

Certainly, launching his Hostile Work Environment as a Service platform with an unsolicited free trial foisted on all his coworkers was an unorthodox move by Damore, but hats off to him for proving that sexism is web-scale. Yet what struck me most about the rollout is not how little Damore seems to know about psychology, but how little he seems to understand tech.

After all, even accepting every gender stereotype ever, I can’t think how they wouldn’t make women first draft picks in tech. Programming was originally women’s work; why would a man who has his secretary write letters to other people, write his own letters to a machine? If I’d just invented the computer and suddenly had lots of coding to get done, and was inclined (I am not) to wonder which sex had the ability to sit and construct complex systems out of simple patterns, I’d say, “Get me whoever knits the aran sweaters.”

If women were genetically driven to nurture costly-to-maintain, temperamental, but desperately important things that melt down at critical moments, we’d all be systems administrators.

READ MORE: Canada’s digital economy rests in the hands of our girls

Producing good tech, even just determining just what products people want and how they’ll use them, requires the very empathy that Damore decries, not to mention teamwork. Facebook didn’t become a multibillion-dollar company because people were just that impressed with “Joe the Coder’s” mastery of database schemas. Indeed, next time you’re struggling to update your LinkedIn profile without sending everyone you’ve ever met an invitation to add you to their professional network, ask yourself if you don’t wish the interface had been designed by someone eager to please, with what Damore dismisses as an “interest in people rather than things,” instead of what I can only assume is a blind octopus filled with hatred for all mankind.

People often mythologize tech. As it became lucrative, something had to be done to delineate the field as masculine. In the public imagination, it’s a kind of priesthood. To a layman who isn’t sure what’s happening in Silicon Valley but senses it involves turning cat pictures into gold, tech can look like alchemy.

We invented an archetype to staff these tech temples: the cliche computer nerd, that celibate genius with a fibre-optic connection to the spirit realm. Coverage of the Google memo has reflected this perception. There’s sympathy for the notion that fully admitting women into this 21st-century clergy violates an e-sacrament, but tech is a business. And if Google has rightly concluded that they’re missing out on talent and has chosen to address this issue, they’re not blinkered by empathy-induced “irrational and dangerous biases,” to use Damore’s words.