Max Fawcett: Does the Alberta government believe the education system’s role is to produce critical thinkers or compliant ones? 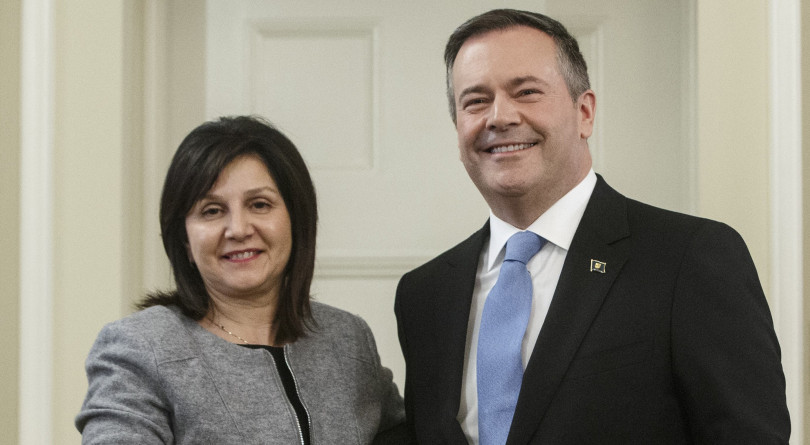 Alberta premier Jason Kenney shakes hands with Adriana LaGrange, Minister of Education after being is sworn into office, in Edmonton on Apr. 30, 2019. (CP/Jason Franson)

Jason Kenney’s government has made no secret of its affinity for combat, and it’s already launched offensives against a wide range of targets that includes everything from the Prime Minister of Canada to a ratings agency in New York. These skirmishes are all in the service of a broader campaign to defend the province’s oil and gas industry, and restore the jobs that have been lost in it over the last few years.

But as parents at a Red Deer area middle school are discovering, this hyper-aggressive strategy can come with some collateral damage. In their case, it’s the Christmas school dance that had to be cancelled after a parent threatened to confront a teacher who had made the grievous error of presenting his grade-four students with uncomplimentary information about the oil sands. So much for the holiday spirit.

The purpose of the exercise that triggered the parent—one that’s part of a social studies curriculum developed by Ralph Klein’s government back in 2005—is to help students develop a better understanding of subjects like conservation, solar and wind power, and oil exploration and forestry. The teacher showed them two videos about the oil sands, one from Greenpeace and one from the Alberta government, and asked them to identify and understand the differences.

“The focus of using those two videos and engaging students was really to focus on building critical thinking, and that concept of critical thinking,” Wolf Creek School Division Superintendent Jayson Lovell told CBC, “which is really woven throughout the social studies curriculum from kindergarten right through to grade 12.”

One would assume that the Government of Alberta would wholeheartedly support such efforts, given how important critical thinking skills are in our fast-moving, information-saturated times. But that assumption has already been tested by the government’s own behaviour.

In November, education minister Adriana LaGrange tweeted a screenshot of a question about the oil sands from a grade-10 social studies test and suggested it betrayed a nefarious political agenda. “Alberta has a great story to tell about our responsible energy sector,” she wrote, “and educators should not be attacking it. We’ll get politics out of the classroom.” One wonders if the War Room—sorry, the “Canadian Energy Centre”—will be deployed to deliver some remedial lessons to uncooperative teachers and superintendents.

It is concerning that anybody would think that these were appropriate questions for a Gr. 10 Social Studies test. Alberta has a great story to tell about our responsible energy sector, and educators should not be attacking it. We'll get politics out of the classroom. #abed #ableg pic.twitter.com/GXFMNBxnXO

LaGrange’s broadside against one of the schools in her department was not an isolated incident, either. In August, Premier Kenney announced a panel that would review the province’s curriculum (one that had already been reviewed by the previous government), and he made it clear that it would be tasked with rooting out any “political agendas” that he believes “were being smuggled into the curriculum by the NDP in a highly politicized way.” Instead, he said, the focus would be placed on “a curriculum that ensures that basic knowledge skills and key competencies are taught to students that are well prepared for the future.”

But critical thinking skills are an essential “competency” in the 21st century, and they include being able to distill and understand arguments from a variety of sources—including those Kenney may not agree with. That’s precisely what the high school test question that triggered Minister LaGrange was designed to cultivate. It asked students to understand different perspectives, not agree with them—a fundamental skill for anyone who wants to work in a knowledge economy. Her reaction to it raises a fundamental question: does her government believe the education system’s role is to produce critical thinkers, or produce compliant ones?

This is a live question, and it’s not hard to imagine that as part of their curriculum review the government will be looking to remove any exercises or lessons that present negative information about the energy sector from Alberta’s classrooms, even if that comes at the cost of fully educating the kids in them.

But as any parent who has tried to shield their kid from information—about, say, sex education—knows, this strategy can backfire. It’s not as though the government can protect Alberta’s students from information that’s critical of the energy sector. Shouldn’t they be exposed to it in school, so they can learn to separate fact from fiction and understand how to engage productively in a conversation that may play an important role in their adult lives?

Parents, of course, should deliver their own lessons about the energy sector at home, just as they would with sex education. If they want to festoon their living rooms with Canada Proud merchandise and teach their sons and daughters about the miracle of hydrocarbons, they can do that. But schools are about preparing children for the road ahead, not protecting them from its complexity—however uncomfortable that might be for some people.