Opinion: Surprising no one, Jeff Sessions is out as Donald Trump's attorney general, and Matthew Whitaker is in. Still, says Tabatha Southey, this is not good news 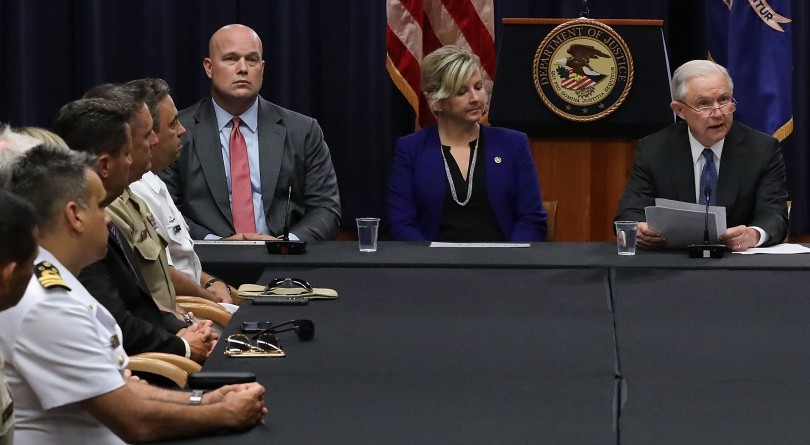 I don’t imagine anyone was taken off-guard on Wednesday when President Donald Trump, in a write-me-a-letter-saying-you-quit way, fired U.S. Attorney General Jeff Sessions. Anyone paying attention saw this coming. The move has been telegraphed—well, tweeted, and tweeted again, and again—since March 2017, when Sessions went all “Well, recuuuuuuuuuse me!” on the FBI’s investigation into Russian interference in the 2016 election, and the president did not laugh. You have to wonder what the world’s coming to when two old racists can’t get along.

Trump has never pretended he doesn’t want to shut down that personally inconvenient investigation. Indeed, the only reason there is a Mueller investigation for Trump to interfere with is that the president previously attempted to scuttle the FBI’s efforts by firing former FBI director James Comey, then went and spelled out his motivation for Comey’s firing in a TV interview, apparently trying to one-up the Nixon tapes with the Trump National Broadcast.

Still, Sessions’s dismissal is unsettling. Let’s say that while no one is surprised, everyone is shocked.

READ MORE: One side of this road is Republican, the other Democrat. Now it’s a battle line.

Democrats controlling the house opens up whole new worlds of investigatory possibility, aimed squarely at the president and his associates. Trump canned Sessions less than 18 hours after the midterms delivered the House of Representatives to the Democrats — because of course he did.

So who is now the acting attorney general? Well, let’s just say Matthew G. Whitaker, who was Sessions’s chief of staff, is not the villain of this story—he’s merely the small unctuous yes-man who trails along beside the villain. He’s less of a character in this narrative than a one-man stand-in for all the petty sycophants and grifters who trip over themselves to show how willing they are to throw away any professional, public or self respect they may have had for quick personal profit. Think of the pudgy character who follows Gaston around in Disney’s Beauty and the Beast. Whitaker is a legal LeFou.

By eschewing the typical job-seeking route of working hard, earning the respect of one’s colleagues and actually applying for positions in favour of the strategy of appearing on TV shows you know the president watches, Whitaker has waged a winning campaign for Trump’s attention. The American public should probably just be glad Trump likely can’t figure out how to use Netflix or we’d be looking at Secretary of the Interior Demogorgon right now.

I’m not suggesting that becoming attorney general is as easy as being seen on TV by Trump. Successful candidates must also say lots of nice things about him and, just as importantly if not more so, say lots of bad things about his enemies. Whitaker has been covering all the bases—very deliberately, it seems—in soft, sticky, Trump-attracting honey.

MORE FROM SOUTHEY: When Trump phones a friend on an unsecured cell, won’t someone think of the spies?

In the late summer of 2017, in his capacity as a legal commentator for CNN, Whitaker wrote an opinion article for the network’s website that ran under the headline “Mueller’s investigation of Trump is going too far,” calling on deputy attorney general Rod Rosenstein to “order Mueller to limit the scope of his investigation.” CNN has since updated the story to add: “This article was originally published on August 6, 2017. On November 7, 2018, President Donald Trump announced that he was naming Matthew Whitaker as acting attorney general.” Which stops just short of saying “We cannot believe this worked either.”

Whitaker took to Twitter that same summer to argue against legislation to protect the Mueller investigation. He also said the FBI had used intimidation tactics by raiding the house of Trump’s former campaign chairman, Paul Manafort, not long before Manafort was charged and convicted.

In Whitaker, Trump has also found an “But-her-emails”-er. That’s despite the fact that, in 2016, the FBI investigated and closed the “her emails” case without bringing charges. But Whitaker, unlike Sessions, supports a special counsel to re-investigate Hillary Clinton’s use of a private email server.

As part of his audition tape for attorney general, Whitaker went on CNN to say that if Mueller was to start investigating the Trump Organization, and thus Trump’s finances, “that would be crossing the red line.” Not surprisingly, the Washington Post reports that Trump “has told advisers that Whitaker is loyal and would not have recused himself from the investigation.” The man Trump so very much wants on the team has laid out a scenario in which some lucky Trump loyalist appointed acting attorney general could cut the special counsel’s budget “so low that his investigation grinds to almost a halt.”

It sure looks as if Trump has found just the fox he wants to guard the henhouse he hates and, one can’t help concluding, fears so much. Some may protest that the previous henhouse guard was also a fox, which is understandable. The Less-Than-Fantastic Mr. Sessions was broadly recognized as a member of the species Vulpes vulpes since at least 1986, when the Senate Poultry Protection Committee refused to appoint him guardian of the United States District Henhouse for the District of Southern Alabama on account of “the great bushy tail and tendency to say ‘I sure do love stealing chickens’ whenever he thought he was only in the company of other foxes.”

And Sessions was certainly not a toothless fox. While his recent inaction might have done his country some good, the same cannot be said for those actions he did take as attorney general. Sessions worked hard to tear up police consent decrees—his final act in office was to limit the Department of Justice’s ability to use them to combat police abuse—as well as end protections for LGBTQ people and generally just ensure the DOJ served the interests of everything but justice.

READ MORE: Trans people cannot be erased. We have always existed—and will continue to live

Whitaker, however, is a different kettle of fox. He’s such a bald fox. He basically took to the airwaves to say, “Hey Mr. President, you got some chickens you want eaten? I’m your canine.” He’s not just circling that henhouse—he’s publicly taking bids on a Mueller-sized rotisserie.

Whitaker is also notably not burdened with the bad case of Got Caught Lying to Congress About Contact With The Russian Ambassador that made even Jeff Sessions, who had previously been known as one of Trump’s earliest and most loyal supporters, recognize he had no choice but to step away from all things Russia-related. Man, I bet he has stories to tell.

It’s highly likely that Sessions is just happy with all the racism he got done. But in my ideal world, this thing ends with him holed up in the Ecuadorian embassy in London, refusing to feed his cat or bathe regularly, and tweeting up a storm.

The termination of Sessions was so expected, newspapers likely had drafts of the “Sessions Sacked” story in the can, all typed and ready to buff up and go like an obituary for a very old actor, the final word on some decrepit thespian most people thought was dead already and very few people liked. And so why, many wonder now, is there an “era-has-ended” kind of dismay in the air now that he’s gone?

By not saying “Take this job and shove it”—despite the president’s clear wish that he do just that—Sessions, for all his many sins, did do his country some good by ensuring that his deputy Rosenstein would be the one overseeing and protecting the Russia investigation.

And while it may take some time for us to learn the extent of the fallout from this week’s move, it only took an instant—a tweet’s worth of time—to shift our international collective mood from “Well, this is ominous” to “Welp, that was apocalyptic.”

It’s as if we’ve all watched a neighbour who has spent the better part of two years loudly informing you that he loves to play with matches and gasoline and is almost certainly going to burn down both your houses one day, probably sometime after the U.S. midterm elections. You can’t rightly say you’re floored when, the day after the midterms, he goes and sets his house and yours on fire, but that doesn’t make the rising flames any less alarming.