Our editorial: If Trudeau and the Liberals want to do politics differently, they should put an end to omnibus bills that bury controversial non-budgetary measures 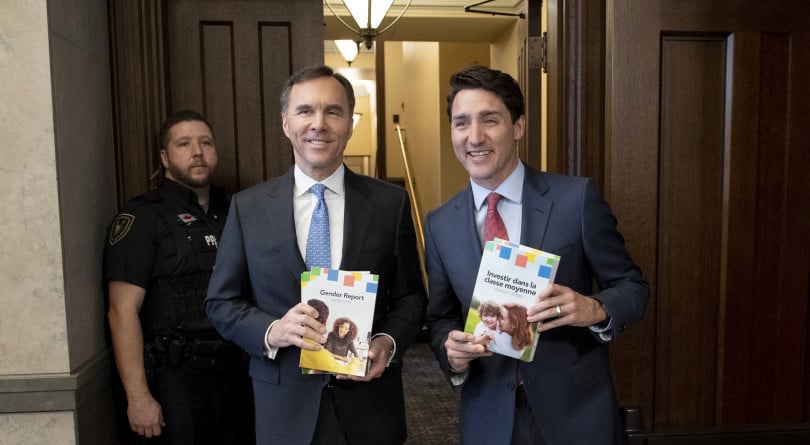 Trudeau and Morneau with the 2019 federal budget (Justin Tang/CP)

At the end of George Orwell’s political fable Animal Farm, Clover the weary cart-horse finds she can no longer tell the difference between her former human oppressors and her current pig masters, who once claimed to be her liberators. She “looked from pig to man, and from man to pig, and from pig to man again; but already it was impossible to say which was which.”

Canadian voters are likely experiencing a similar sensation these days. While Prime Minister Justin Trudeau strode to victory in 2015 on a promise to do things differently than his predecessor, former prime minister Stephen Harper, it has recently become impossible to say which is which—particularly when it comes to their abuses of parliamentary democracy.

FROM 2015: Another omnibus budget bill and a test of Parliament’s will

Omnibus bills were once a major point of distinction between the federal Conservative and Liberal parties. During his minority years, Harper frequently threw numerous pieces of legislation into one catch-all bill and then dared the Opposition to defeat his government over it. As political gamesmanship, this tactic worked quite well. So much so that Harper continued to rely on omnibus bills even after winning a majority. Of course, lumping many disparate bits of law-making into one bill makes it impossible for Parliament to properly consider each individual piece of legislation. It also denies the public the ability to focus or speak out on items of significance to them, since so many things are going on at once. And this allows governments to avoid the necessary scrutiny that democracy demands.

Trudeau vowed to change all this. As the 2015 Liberal platform declares: “Stephen Harper has used omnibus bills to prevent Parliament from properly scrutinizing and debating his proposals. We will . . . bring an end to this undemocratic practice.” Despite such a clear and unambiguous platform promise, however, Trudeau is now making liberal use of omnibus bills himself. And for all the discreditable reasons he once threw at Harper. Mimicry, meet hypocrisy.

The Liberals’ 2019 massive budget implementation bill, for example, contains several significant changes to long-standing government policy that should not be treated in omnibus fashion. Most concerningly, it alters how Ottawa intends to treat asylum-seekers who arrive into this country outside official border crossings. New rules contained in the budget bill will deny most of them full hearings and facilitate their summary removal. It’s a dramatic turnabout for Canadian refugee policy—and one that deserves fulsome public discussion. Pro or con, this isn’t something a government should be hiding on page 274 of a 392-page bill.

RELATED: A very short bill to end the use of omnibus bills

Beyond upending decades of Canadian refugee policy, Trudeau’s latest omnibus bill also includes legislation to reduce the area allotted to ski hills in Banff National Park and increase the number of federal court judges. Again: why conceal these items in a door-stopper budget bill? Surely they deserve their own spotlight.

And the Liberals are not first-time offenders in this regard. Last year’s budget bill similarly contained a little-noticed section that established remediation agreements for firms accused of serious corporate crimes. This, voters later came to realize, was placed there after heavy lobbying by SNC-Lavalin, and with the expectation that the company would be able to access such an agreement rather than face a trial for bribery. We know how that turned out for Trudeau. Trying to sneak controversial measures past Parliament and the public via omnibus legislation is an affront to democracy. And politicians who do so should expect to be held fully accountable for their transgressions.

In his pre-election appearances, Trudeau has lately taken to saying the federal Liberals will “pick the other path” when it comes to the divisive partisanship that now defines our political era. It’s a pleasing line for voters tired of such behaviour. To be credible, it has to be backed by real evidence. Putting a permanent end to deceptive, undemocratic omnibus trickery would be a good place to start.

This editorial appears in print in the June 2019 issue of Maclean’s magazine with the headline, “The omnibus trick.” Subscribe to the monthly print magazine here.