Justin Trudeau went along but hasn’t gotten along

Andrew MacDougall: While the PM has said what people want to hear on the world stage, it hasn't led to action. Canada's impotence is complete. 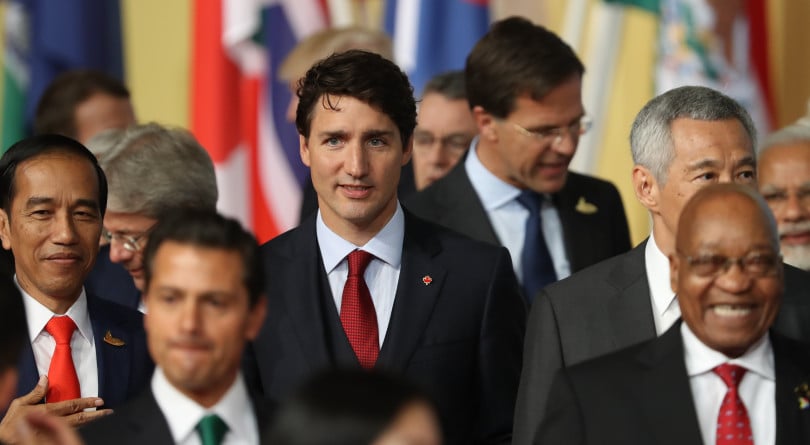 Andrew MacDougall is a London (U.K.) based columnist, commentator and consultant. He was formerly director of communications to Stephen Harper

One wonders what reaction Justin Trudeau would get today if he rocked up in the lobby of the Lester B. Pearson building?

The response to Trudeau’s November 2015 visit is now the stuff of legend. The new Prime Minister was mobbed on his maiden visit by the scrupulously non-partisan (ahem) civil service, so happy were they to be rid of Stephen Harper, the man who had worked them so hard against their natural instincts.

I suspect Trudeau would still be greeted warmly, despite Canada’s decidedly diminished relations with countries like China, the United States, India and Saudi Arabia. No matter how tough things are getting in the world there is little doubt the public service more closely identifies with the Trudeau worldview than Harper’s.

Even the minor detail of Trudeau’s PMO and the foreign affairs minister’s office hanging a senior diplomat out to dry over phone calls to ex-ambassadors telling them to cool it with their unhelpful rhetoric on China isn’t likely to cast too much of a shadow over Trudeau’s image at Fort Pearson. At Global Affairs Canada form is scored over delivery; it is better to say the polite thing than offend in the pursuit of a result, something Canada isn’t getting much of these days.

The Global Affairs outburst of love for Trudeau—let’s not forget—came on the heels of some pretty serious winning with Stephen Harper.

After years of post-NAFTA trade torpor it was Harper who negotiated and agreed the Canada-European Union trade agreement (CETA) and Trans Pacific Partnership (TPP), and got trade deals with South Korea, Switzerland, Iceland, Norway, Lichtenstein, Peru, Colombia, Panama, Honduras and Jordan over the line. Existing trade deals were also modernized.

During the global economic recession of 2008-09 it was Canada and India that were front and centre in redrafting the regulatory framework via the G-20. It was Harper who then led the push for nations to get their spending in check to choke off the prospect of severe inflation at the Toronto G-20 meeting (inflation, it must be said, that never came, even after the flooring of interest rates and printing of money). And it was also Harper who got countries and individuals to stump up billions in contributions to combat maternal and newborn health in the midst of that recession.

Nor was the former prime minister afraid to stand up for allies and Canadian values.

At the 2012 Summit of the Americas it was Harper, not Barack Obama, who stood up on behalf of the United Kingdom to block a move by then Argentine President Cristina Fernandez to insert provocative language on the Falkland Islands into the summit declaration. In 2013 it was Harper who suggested the G-8 should become the G-7+1 in response to Vladimir Putin’s lone wolf support for the Assad regime in Syria. And it was Harper who told Putin to “get out of Ukraine” at the next year’s G-20 meeting in Australia. Harper even had the temerity to tell Saint Obama that he was making the wrong decision in holding up the Keystone XL pipeline.

Harper, as he loved to point out, wasn’t about to “go along to get along” as he felt too many of his predecessors had. None of Harper’s summit interventions against other participants made Canadian bureaucrats particularly comfortable. It certainly made for some awkward chat on the reception circuit. It might have even made Canada hated—gasp—by some.

Nor is there much evidence they were effective. While the Falklands remain British, Putin is still very much in the Ukraine and Syria is in its seventh year of hell.

For all of Harper’s conviction, Canada was—and still is—a middle power. Without the United States rowing in its direction, Canada doesn’t go far, something Harper understood and Trudeau is now discovering in spades. I can remember how angry Harper was at Obama for drawing what ended up being a meaningless red line on chemical weapons use in Syria; I can only imagine how frustrated Trudeau must be at Donald Trump’s crayon drawings all over the international order.

Of course, those crayon drawings are also why Trudeau has managed to achieve such a high profile on the international stage without having much in the way of results to justify it. Justin Trudeau the progressive is everything the intelligentsia love in a leader; Trump the populist is everything they hate. Trudeau receives plaudits from the commentariat for saying the right things even if he can’t then translate them into action. Canada’s impotence on the world stage at the moment is fairly complete.

Trudeau is an ardent environmentalist, yet the Paris Accord remains adrift and Canada still has no plan to hit its targets. Trudeau is a feminist, yet the world has become a decidedly a more masculine place. Thanks to Trudeau the G-8 is taking action on sidebar issues like plastic waste, but is nowhere on headline items like China’s aggression, including the abduction of two Canadians.

To his credit, Trudeau kept NAFTA largely free of harm and pushed CETA and the TPP over the line, but not before angering the members of the latter pact by trying to stuff his political agenda into the agreement at the last minute, a move that also killed any Trudeau trade plans with China before they started. The offensive trade agenda with the rest of the world is moribund.

Being on the margins of global events ought to anger a diplomatic corps eager to prove its mettle, but there is no sign of restiveness. Or—if China is the barometer—much in the way of activity. Which seems a bit backwards given that God’s Gift to Diplomacy is now apparently in charge of Canada’s foreign affairs machinery.

This ultra-passivity in the face of forces antithetical to Canada’s values suggests our diplomats are content with deploying rhetoric, and resolved to ineffectiveness in the wake of Trumpism. I don’t know if Stephen Harper could have gotten a different result but I would have paid good money to see him try and deal with the current global circumstance.

It’s a sad state of (foreign) affairs and something no Canadian should applaud.