Anne Kingston: The PM reframed his ethics violation as a civic virtue—this government will protect jobs, even if lines need to be crossed. 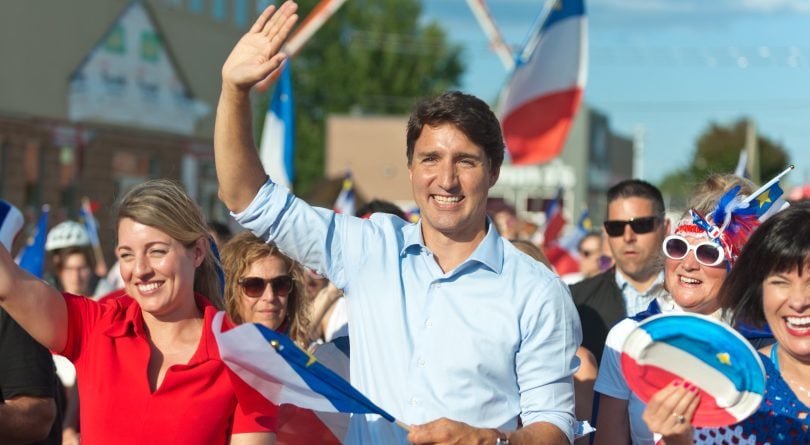 Trudeau attends the celebration of the National Acadian Day and World Acadian Congress in Dieppe, N.B., on Aug. 15, 2019. (Marc Grandmaison/CP)

Justin Trudeau doesn’t apologize, at least for non-historical transgressions. His non-apology apologies tend to follow a formula: to assert his behaviour was “appropriate” and unimpeachable, to suggest “people can experience interactions differently” (and that his interpretation of the experience is the correct one), and then to wrap it all into a “teachable” moment.

But the Prime Minister’s flagrant “I can’t apologize” on Wednesday after he was found in violation of the Conflict of Interest Act for not the first, but the second time, established a breath-taking new level of righteous imperiousness, even for him. It even brings to mind his father’s defiant “Just watch me!” line during the 1970 October Crisis. Pierre Elliot Trudeau was responding at the time to a reporter’s question about how he planned to restore order in Quebec. Days later, Trudeau invoked the War Measures Act, leading to a police crack-down against dissidents—and a national controversy.

The subject under discussion now isn’t civil liberties. It’s another democracy bedrock: a justice system free from political interference. After conducting an independent investigation, Conflict of Interest and Ethics Commissioner Mario Dion released a damning report Wednesday that found the prime minister and his staff made a “flagrant attempt to influence” the judicial process in efforts to press then-justice minister and attorney general Jody Wilson-Raybould to halt criminal prosecution against SNC-Lavalin. Dion found Trudeau violated a section of the Act that prohibits public-office holders from using their position to try to influence a decision that would improperly further the private interests of a third party, in this case the Quebec-based engineering giant.

Trudeau’s response to the report suggested a haughty disregard on several levels—to the office of the ethics commissioner, to the Conflict of Interest Act, as well as to Canadians’ basic comprehension of what words mean. He “accepted” Dion’s report and took it “very seriously,” Trudeau said, while also asserting that he disagreed with a central conclusion: “Where I disagree with the commissioner is where he says that any contact with the attorney general on this issue was improper.” He delivered a generic: “What happened over the past year shouldn’t have happened.” And, for good measure, he said, “I take full responsibility,” calculated to be repeated in media headlines, which it was.

But not only did the Prime Minister not take any responsibility, he reframed his violation of the Conflict of Interest Act as a civic virtue, and a probable campaign-trail mantra: his job is “to stand up for Canadians and to defend their interests,” Trudeau said. And Canadian “interests,” by Trudeau’s own metric, equals jobs: “I can’t apologize for standing up for Canadian jobs because that’s part of what Canadians expect me to do.”

And this is where Trudeau is channeling “Just watch me!” The Prime Minister of Canada is asserting that “Canadian interests” as he defines them (i.e., Canadian jobs before judicial independence) trump the Conflict of Interest Act or the conclusions of an independent ethics commissioner. He’s saying that protecting the commercial viability of corporate employers, no matter how corrupt their practices, is job one for the government. He’s saying that the ends justify the means. They justify lying to the public. They justify trashing a federal cabinet minister or two. They justify doing whatever the Prime Minister believes needs to be done. Because: Jobs!

Here, however, it’s worth noting that the righteous “saving Canadian jobs” defence in the SNC-Lavalin case was proven to be something of a canard. The company itself said job loss wasn’t cited in its push to obtain a remediation agreement. Fact-checking proved the claim that thousands of jobs would be lost was overblown. The Department of Finance didn’t even bother with an economic projection of potential job losses. Dion’s report did, however, feature repeated mention of the Liberals’ concern about their political fortunes in Quebec should SNC-Lavalin not receive a deferred prosecution agreement.

True to form, Trudeau attempted to salvage a virtuous teachable moment on Wednesday: “I recognize the lessons to be learned,” he said. “We have a system in which we have to make improvements.” But, as Dion’s report made clear, the “system” wasn’t the problem. The problem was Trudeau’s behaviour.

And now how to process that behaviour, or whether to ignore it, is Canada’s problem.

The days after Dion’s report was released have seen anti-Liberal partisans screaming for his resignation. On the other side of the political divide, many wave away the Prime Minister’s violation of the Conflict of Interest Act, arguing the alternative to his governance could be far worse, which is true. It always could be worse. Nonetheless, that shouldn’t distract Canadians from asking a vital question: Is expecting ethical behaviour from our Prime Minister and a judicial system free from political tampering now a luxury that Canadians no longer believe they deserve or think that they can afford?