Justin Trudeau's only way out of this scandal

Tom Parkin: Admit mistakes. Call an inquiry. Ask for forgiveness. This is the only way forward and anyone who is truly loyal to the PM will tell him this. 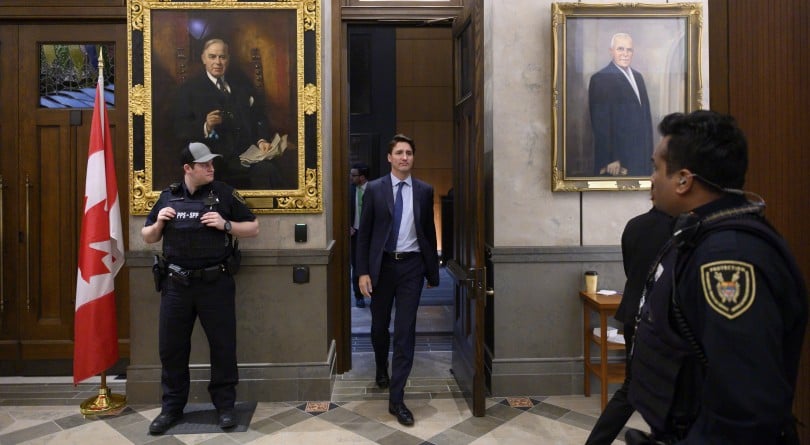 <span>Trudeau leaves the foyer of the House of Commons after participating in the second night of a marathon voting session on Parliament Hill on Thursday, March 21, 2019.</span> (Justin Tang/CP)

The SNC-Lavalin scandal, now in its seventh week, has led to five resignations and a precipitous drop in Liberal Party support. And there’s no end in sight.

There’s only one sure exit from this scandal. The question now is whether the Trudeau Liberal government is willing to consider it. Or determined to continue bleeding, everyday.

Again last week the Liberals attempted to suffocate the story, shutting down the justice committee and tryng to change the channel to their budget. When that failed, Liberals reacted with internecine attacks on former attorney general Jody Wilson-Raybould and former Treasury Board President Jane Philpott.

It was another failure. The counter-attacks on Wilson-Raybould and Philpott gave more fodder to pundit shows and newspaper columnists—and picked the weakest ground to fight on. According to IPSOS pollster Darryl Bricker, surveys show Canadians are twice as likely to believe Wilson-Raybould than Prime Minister Justin Trudeau.

READ MORE: What Jody Wilson-Raybould and Jane Philpott can actually say—and where

Against this siege the Trudeau Liberals have no ammunition. If the Liberals had evidence that Wilson-Raybould’s story was untrue, Liberal MPs would have brought it to the justice committee weeks ago. But none of the justice committee testimony has refuted the central claim that there were multiple improper attempts to interfere in a criminal prosecution.

Now the siege is about to tighten. Soon, Wilson-Raybould will table more evidence, including emails and texts. Only she knows what it will say. But it will not help the PM. And it will be news.

By now it should be crystal clear to Liberal strategists and party grandees they cannot prevent Canadians from getting the truth about the PMO’s interactions with Wilson-Raybould. There is too much interest in this story—rightfully so, because any attempted interference in a criminal prosecution is profoundly serious—and it appears, one way or another, Wilson-Raybould is determined to tell it.

The Trudeau Liberals need to stop doing what can’t work—and take the only path that might.

The Prime Minister needs to tell Canadians he’s done some real soul-searching. He needs to admit to making mistakes. Ask for forgiveness. Call an inquiry. And commit to working hard to get back on agenda and rebuilding trust.

Yes, it will hurt. More PMO staff may resign. There could be a finding that Trudeau broke the constitutionally-embedded legal principle of non-interference in prosecutions.

But the alternative is more painful. The Trudeau Liberal government isn’t just facing weeks of more damaging evidence with a loser communications strategy. An election is seven months away. Based on polls today, the most likely outcome of is some sort of minority Parliament. And that opens the door to the justice committee—even if the Liberals continue to govern—investigating the scandal fully, calling witnesses and issuing subpoenas.

Those who are loyal to their political principles know that defending what’s not defendable isn’t just a fool’s strategy. It’s political tragedy. Mistakes made can’t be unmade. No amount of spin annihilates them. The true test of political principle and loyalty isn’t telling a leader he’s always right, it’s telling him when he’s wrong. For Liberals, it’s that time now.