Tom Parkin: The PM's refusal to call a by-election for his democratic competitor has made him the villain, and handed Singh the mantle of underdog 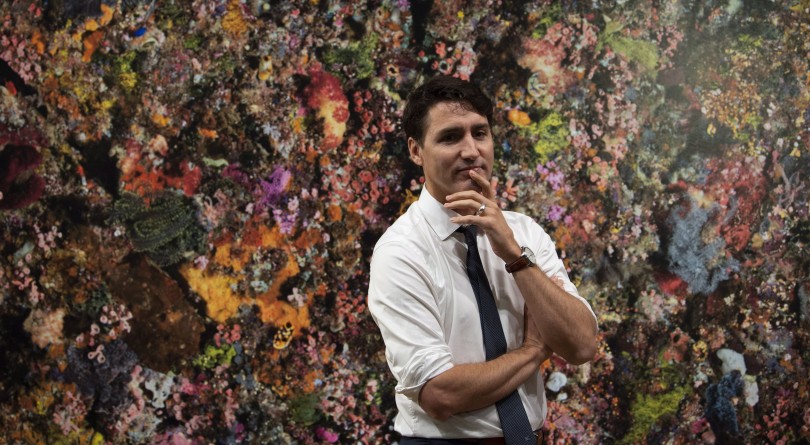 Prime Minister Justin Trudeau stands in front of an image of a coral wall as he walks through the National Gallery in Ottawa, Monday, Oct. 29, 2018. (THE CANADIAN PRESS/Adrian Wyld)

NAFTA may not be completely over—the problem of steel and aluminum tariffs are still outstanding—but the main drama of David versus Goliath is done.

Of course, Prime Minister Justin Trudeau was the underdog in the NAFTA story, facing off against the despotic bully U.S. President Donald Trump, for whom, everyday, every decent Canadian has more and more scorn—and concern.

Donald Trump is the kind of man who makes petty personal insults for amusement, lies as a strategy and hurts people so he can profit. Among others, Trudeau—and each of us—has been on the receiving end of that politics.

And therefore it is an amazing display of an absolute absence of self-reflection that, having just ended this chapter, Trudeau himself so casually threw his own petty attack on NDP Leader Jagmeet Singh, a democratic competitor who has done Trudeau no personal harm, by refusing to call a by-election in Burnaby South, where Singh is the nominated NDP candidate.

And the move has brought back to focus other disappointments, ones almost forgotten in the mists of the year-long NAFTA talks. Repeatedly promising to reform our electoral system—then reneging. Promising to end omnibus bills—then just this week, tabling a 550-page whopper. Promising to set the highest standards for public office—then exempting himself and his family vacations on billionaire island.

And because it was a move with no explanation, it leaves Canadians to fill in the blanks. The impulse to spend political capital to sideline Singh for just a few more weeks testifies to an apparent Liberal fear that, once seen in close completion with Trudeau, Canadians will re-evaluate Singh as a person—and realize his value is well below price. The move belies Liberal claims that Singh is a weak competitor.

But the move is not only a destruction of the Trudeau brand and an invitation to re-evaluate both Singh and Trudeau. It evokes a visceral narrative many Canadians have personally experienced, sometimes many times over.

Canadians may be divided or unsure about many things. We all have different political ideas. But we are overwhelmingly fair-minded, no matter a person’s politics or background. When we see someone asking for the fair chance to prove himself—then having that chance denied by a person of high privilege—many Canadians see themselves. The response is in the gut.

Trudeau’s refusal to give Singh his fair chance hands over to Singh the mantle of Canadian underdog. Trudeau has given to Singh the story of every Canadian who has worked hard, only asked for an opportunity to prove himself—then been blocked by impenetrable privileged groups more concerned with helping themselves than giving fair chances.

It is a true story of Canada. And not a rare story. But it is a powerful story exactly because Canadians reject it—and aspire to a society not based on privilege, a Canada where better is always possible, where we all advance together.

Trudeau has made himself the villain in the story of those aspirations—when he could have so simply just made the right move.