Let's finally call 'violence against women' what it really is

Anne Kingston: It's been 30 years since Marc Lépine killed 14 women at Montreal's École Polytechnique. Why have we not properly addressed violence against women? 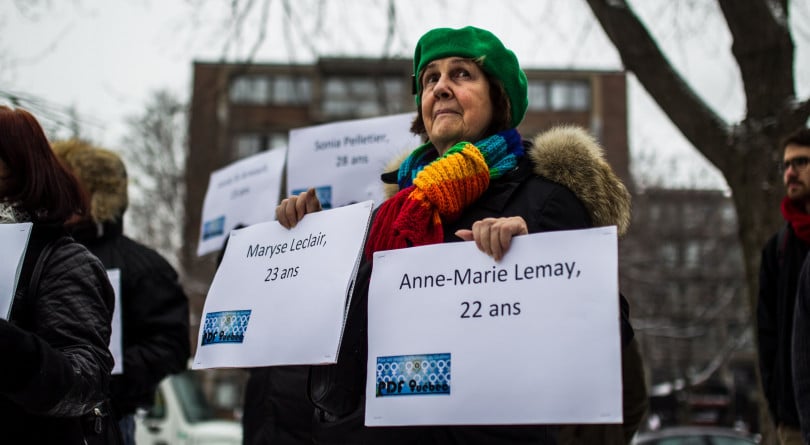 A woman holds papers that bears the victim's names as people take part in a ceremony at the memorial park to mark the 25th anniversary of the Ecole Polytechnique massacre in Montreal, Canada on December 6, 2014. (Photo by Amru Salahuddien/Anadolu Agency/Getty Images)

We’re more than a week into the now-institutionalized time of year devoted to eliminating “violence against women.” Nov. 25, International Day for the Elimination of Violence Against Women, marked the beginning of “16 days of activism against gender-based violence” ending on Dec. 10, Human Rights Day. We’re two days away from Dec. 6, the 30th anniversary of the National Day of Remembrance and Action on Violence Against Women. That’s when we’ll once again remember the 14 women murdered by Marc Lépine in his targeted massacre of “feminists” studying engineering at the Université de Montréal’s École Polytechnique: Geneviève Bergeron, Hélène Colgan, Nathalie Croteau, Barbara Daigneault, Anne-Marie Edward, Maud Haviernick, Maryse Laganière, Maryse Leclair, Anne-Marie Lemay, Sonia Pelletier, Michèle Richard, Annie St-Arneault, Annie Turcotte and Barbara Klucznik-Widajewicz. Lépine injured another 14, both women and men. And every year, for almost three decades, we vow to end “violence against women.”

It’s a mission that won’t succeed until we speak plainly and in the active voice about “violence against women.” That begins with rethinking the term itself—a passive construction in which no one is committing violence against women or children. It’s just happening to them; they’re the passive recipients, like all of those female cadavers brutally raped and murdered on shows like CSI. It’s a phrase that summons comparison to “The War on Terror,” a battle with an indeterminate enemy designed never to end. It also doesn’t identify inequalities—the fact that Indigenous women, racialized women, transgender women, and disabled women are all more likely to be targeted.

The passive voice is the default when discussing men’s violence against women and children, Elizabeth Sheehy, professor at the University of Ottawa’s faculty of law, told me in an interview earlier this year for a Maclean’s investigation into Canada’s “epidemic” of femicide, defined as “the killing of one or more females by one or more males because they are female.” We need to use the active voice, says Sheehy, a noted authority on legal responses to men’s violence against women and children: “We say ‘things have happened to a woman’; we’re not willing to say ‘He did this to her.’ ”

The passive voice was used to ludicrous effect in media coverage of the September 2019 murder of Tharshika Jeganathan in Scarborough, Ont. “Machete attack leaves woman dead in Scarborough,” one headline read. “Woman killed in brutal machete attack,” read another, bringing to mind a rogue machete floating through air, acting independently. Sasikaran Thanapalasingam, Jeganthan’s estranged husband, acquitted in 2017 on two charges of assaulting her, was charged with first-degree murder and awaits trial.

Using the active voice is critical, says Sheehy. It requires replacing, “She was assaulted. She suffered a broken bone,” with the more specific, “He broke her forearm by smashing it with a hammer.” Using the active voice when talking about sexualized violence is a political act in itself, Katz says, because it puts the onus of responsibility on those who engage in abusive behaviours. Terminology like men are “half of the equation” in solving the issue suggests women participate equally, Katz notes, when, by definition, they do not participate at all.

RELATED: Maryam Monsef on the violence against women and girls crisis

Framing violence without an active agent also stokes the perception that women are letting this happen. We saw this in the recent media coverage of the brutal murder of Grace Millane, a marketing graduate from Essex, England, who died in Auckland, N.Z., in 2018 on her 22nd birthday. A 27-year-old man Millane met on Tinder was recently convicted of first-degree murder: He strangled Millane to death during sex, viewed online clips of child sexual abuse after he killed her, and took photographs of her body. He stuffed her body in a suitcase, then disposed of it.

This man’s name remains shielded in New Zealand by a court order for reasons unknown, though it has been reported by some outlets in the U.K. He will be sentenced on Feb. 27, when his name may or may not be revealed. During the trial, Millane’s name and dating history were on full display; her behaviour was scrutinized and criticized in a manner that has been compared to the lurid treatment of Mary Nichols, the first victim of Jack the Ripper more than 100 years ago. One story even suggested Millane’s death could be partially blamed on technology: “Grace Millane murder reveals dark side of dating apps.” Yes, let’s blame the app. At least then we don’t have to grapple with a messier, more highly charged political problem that requires a brutal social reckoning.

Clarity in language is crucial to good policy-making, says Sheehy, who was invited by the federal Liberal government to consult at its initial planning committee for the “Strategy to Prevent and Address Gender-Based Violence.” Sheehy’s first recommendation: change the language to “men’s violence against women and girls.”

Using “gender-based” in this context is so vague, it’s meaningless, Sheehy told me: “It could include any form of violence—women’s violence against men, women’s violence against women, homophobic and transphobic violence. It can also be commandeered by men’s rights activists who say women are at least as violent as men, if not more violent.” The more we use these euphemisms, as opposed to “women-killing” or “femicide,” she says, “the easier it is to ignore and silence what is actually happening.”

RELATED: MMIW: “It could have been me”

“Men’s violence against women and girls” clearly defines the problem. It’s also a term politicians dread, as it’s destined to raise cries that not all men commit violence against women, that men are more often the victims of violence, and that women kill other women—all of which is true. But research from the Canadian Femicide Observatory at the University of Guelph, which tracks the murders of women and girls in Canada, reveals marked differences in the way men and women are killed. And these are often hidden in police reports and Statistics Canada data. Men are most often killed by men, often someone who is an associate or a stranger. Close to 70 per cent of women and children, on the other hand, are killed by men they knew, trusted, and loved.

Most violence experienced by women doesn’t end in murder and isn’t reported. This is violence in the home, or “domestic violence,” a term that fails to communicate its devastating impacts to a family and socially. “Domestic” is by definition private, not public, business. The word denotes civility, even tameness, which feeds narratives that excuse and minimize the crime.

That was revealed in the recent murder of Abril Pérez Sagaón, shot in the head in an ambush in Mexico City; her estranged husband, Juan Carlos García, the ex-CEO of Amazon Mexico, is wanted for questioning. The couple was locked in a bitter divorce battle; Pérez had a restraining order against García, whom she accused of attempted murder earlier this year. She reported he beat her with a baseball bat while she slept. Garcia was taken into custody, then released when the judge “downgraded” the charge to “domestic violence.” (This week, Pérez’s daughter posted horrific photographs taken after the attack on Twitter showing her mother’s face beaten to a pulp.)

“Domestic violence” is increasingly replaced by “intimate-partner violence,” which recognizes violence outside matrimony, and “family violence,” which includes the growing number of older women killed by children or relatives. We’re also seeing the adoption of “intimate terrorism,” which captures the constant destabilizing fear resulting from an intimate partner’s controlling, coercive behaviour.

Still, calls to identify targeted mass killing of women as “terrorism” are met with resistance, even though mass murder based on ideological hatred is how terrorism is defined. In 2014, Journalist Francine Pelletier, whose name was on a list of Lépine’s targets, said that Lépine was Canada’s “first terrorist and nobody was treating it that way,” in a Toronto Star interview.

Dawn Black, who was an NDP MP in 1989, told me in a 2018 interview that anyone who dared identify the massacre as a crime against women was vilified at the time: “The mainstream media with a few exceptions saw [Lépine] as a mentally ill person and refused to see him as a perhaps a mentally ill person who deliberately targeted women.”

I noted the same resistance to identify “terrorism” after a driver plowed onto a crowded Toronto sidewalk in 2018, an event known as the “Toronto van attack,” much like the “machete attack.” Alek Minassian was charged with 10 counts of first-degree murder (eight of the 10 people killed were women) and 13 of attempted murder; an anti-woman screed had been posted on his Facebook account before the attack.

In 1991, Black, now a director of the Broadbent Institute, a progressive think tank, introduced the private member’s bill to recognize Dec. 6 as a National Day of Remembrance and Action on Violence Against Women. She was also a co-author of the pointedly titled 1991 parliamentary subcommittee report, “The War Against  Women,” whose largely ignored recommendations are as relevant today as they were then. “Violence against women” is identified in the report as “a multifaceted problem” that “encompasses physical, psychological and economic violations.” Lépine’s actions are termed “an extreme form of the violence women regularly confront in their lives” and “violence against women” is defined as a systemic problem disproportionately experienced by Indigenous women.

RELATED: The MMIWG final report lands: “I hold up a mirror to Canada”

The report’s 25 recommendations include the call for a Royal Commission (a “panel” was set up), resources to remove barriers to equality faced by girls and women, particularly in Indigenous communities, and mandatory sensitivity training for police, judges and MPs. It also calls for a “national campaign to counter violence against women,” something we’re still waiting for.  (The federal government’s “gender-based strategy” came under harsh criticism from the UN’s Special Rapporteur on violence against women who found violence against women a “serious pervasive and systematic problem” in Canada and “unfinished business that requires urgent actions.”)

And now, 30 years after the targeted killing of “feminists” in a Montreal classroom, there is a way to take action nationally by speaking plainly and actively. Call it “men’s violence against women.” Call it “intimate violence.” Call it “misogyny-fuelled terrorism.” Speak of it in the active voice. Only then can we address the unique forms of violence faced by women and girls, perpetrated by men.