Let’s not waste this crisis in American democracy

Andrew MacDougall: The first step to removing the poison that’s infecting our political systems is to stop injecting it. Let's start at home, on both the right and the left. 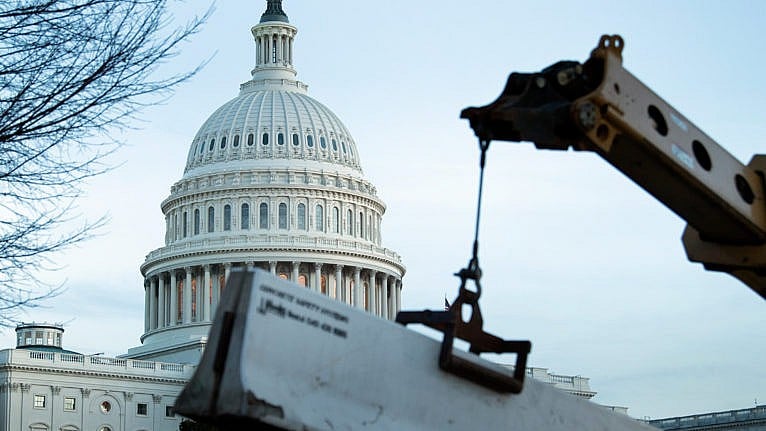 A crowd control fence around Capitol Hill is reenforced with concrete barriers on Jan. 7, 2021, in Washington, DC (BRENDAN SMIALOWSKI/AFP via Getty Images)

Watching the final episode of Donald Trump’s disaster class in American democracy, in which a Trump-incited mob stormed the Capitol, was enough to make any democrat weep. How does one go about fixing such a big mess, a mess that’s now obscuring the world’s brightest-ever beacon for freedom, democracy and the rule of law?

In one sense, the answer is easy: remove Donald Trump from the Oval Office and begin the slow crawl back to normality. Anyone listening to president-elect Joe Biden in the wake of Wednesday’s riot certainly felt that pang of relief that a rational adult will soon be back behind the Resolute desk.

As an astute observer, you will note I’ve just committed the cardinal sin of this era: assuming everyone is a rational actor. What this week’s carnage in Washington D.C. demonstrates, amongst other things, is that a significant portion of the American population isn’t acting rationally. Removing Trump doesn’t fix that.

But there I go again, committing another sin of this age: lying. The problem for American democracy is that the mob that descended on Washington is acting rationally according to the information they’ve been given. The ‘patriots’ who showed up to ‘Stop the Steal’ honestly believed Donald Trump was swindled out of his just desserts, namely, a second term in office. This inability to sniff out the lie is the root of our problem. And again, removing Trump doesn’t fix that.

As former President Barack Obama noted recently whilst out selling his memoir, America is in the midst of an epistemological crisis; no one can quite agree what constitutes the truth these days. And here’s the thing: if we can’t agree on a set of facts, then we cannot practice the art of politics. Full stop.

The lack of a common knowledge base makes reforming the polluted information economy the most important task facing the new Biden administration. What the algorithm has corrupted, men and women of good faith must now put right. Companies like Facebook and Twitter have not only given people the tools they need to create their own realities, they’ve also incentivized the system to heighten emotions, split populations and prevent a common understanding. Powerful sewers like 4chan, TheDonald, Parler and 8kun then provide the misinformed with a shelter under which to aggregate. Each of these organizations must be challenged to de-risk their platforms and the might of the U.S. government is the best bet at forcing them to change their ways.

READ: The posterboys of American authoritarianism

Fixing our collective information problem won’t be easy. As a conservative, I’m loath to have any government intrude on the private sector to police speech, but given the enormous power of these platforms, the lightning speed at which they allow the spread of hate and falsehood, and the glaring lack of concern for the problem they’ve created, I’m not sure there is any other choice. Right now their business models are geared to growth and virality, not accuracy, and that’s got to become a deal-breaker in the public’s mind.

Sorting the plumbing of the information economy would be a good start, but there is much more work to do, and in many more places than America. The problems on display in the United States—the embrace of negative partisanship, the mistrust of the media, and the economic dislocation—are also problems in places like Canada. And while it’s fun to rubberneck the U.S. car crash, we would do better to keep our eyes on the road ahead.

The first step to withdrawing the poison that’s infecting our systems is to stop injecting it. Removing Trump is a help, but politicians of all stripes in all countries need to stop preying on the vulnerable by salving their insecurities with snake oil. There might very well be short-term electoral gold in feeding cynicism, fermenting anger and smashing the system, but the value of the prize is not in the long run if you don’t then come up with a better solution. But guess what? If there were easy answers to the complicated problems facing Western economies they would have been given by now and nobody would have needed someone like Trump to point out how much everything sucks. Everyone in public life needs to start aiming higher.

RELATED: The Republican party has become an authoritarian party

And before the left gets too smug, the admonition to lay off the poison applies equally to them. The left in Canada (and elsewhere) exult in shoving all conservatives into the racist camp because it’s a low-risk strategy that serves their electoral interests. And so it is, too, on hot-button issues like abortion. To wit, the first week of Justin Trudeau’s last election campaign focused almost exclusively on pointing out that some Conservatives are, gasp, social conservatives, as if allowing even one into Parliament would immediately throw everyone back into the Stone Age. Instead of whacking these non-threatening moles, why not finally listen to the Supreme Court and put some laws around abortion so the issue can be sorted for good and we can move onto other issues?

Partisans of all stripes need to remember they can be partisans without demonizing the other side. Most people in public life are in it for the right reasons and portraying everyone as bent only corrodes people’s trust in the system. Even worse, it makes some want to take matters into their own hands. You might think, as I do, that Justin Trudeau is a terrible prime minister but calling him a ‘traitor’, as too many do online, is the first step in legitimizing violence against him. It has to stop and it has to be the leadership that calls for it to end.

Instead of whipping up a furore over your opposite number over everything they do and attacking everyone’s motives all of the time, more politicians and partisans should instead call out their own side when it messes up and support their opponents when they do the right thing. This, more than anything, would help take politics off the boil. Because insisting that everyone in every party should have exactly the same views on every issue is the surest path to the negative partisanship that plagues so much of modern politics. Intra-party or government disagreements should be seen as a sign of democratic health, not an object of endless media fascination.

For their part, the media should stop writing to please the algorithms and the insider crowd and move back to a clear focus on public policy and what’s at stake for the population. We don’t need to read about who’s in and who’s out, or who’s up and who’s down, or about whether the Prime Minister now has a beard; we need to know whether the hundreds of billions of dollars being spent in our name are achieving the objectives set out by the government. We need to know how many vaccines are going into arms and where the hold-ups are. The first step to restoring trust in government is telling Canadians exactly what it’s up to and how well it’s doing, not chasing every bouncy ball that can generate a few clicks.

It will take a while to recover from the Trump era. The man has trashed just about every room in our democracies. But the size of the task mustn’t frighten us from pitching in together to clean up the mess. The world is watching all western democracies and we need to get our s–t together, quickly.